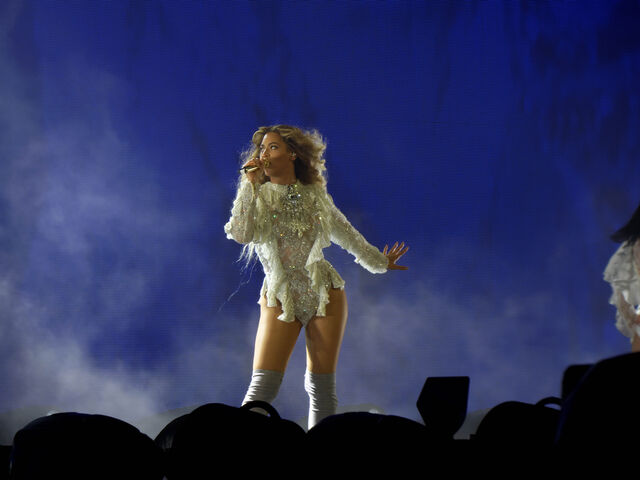 Since Ella Fitzgerald’s double win at the first ceremony in 1958, women have been making Grammys history. Judy Garland became the first woman to win Album of the Year in 1961, followed by Astrud Gilberto, who held the same honor for Record of the Year in 1964. But still, between 2012 and 2017, 90.7% of general category nominees were male, according to a USC study. In such a male-dominated industry, women are constantly proving themselves to be a force to be reckoned with, and this year, some of the best are slated to make history. Here are four pivotal moments to look out for during Sunday's ceremony.

1. HAIM’s Rock 'n' Roll Nomination for Album of the Year

HAIM has made history by being the first all-women rock group nominated for Album of the Year. The band is nominated for their third studio album Women in Music Pt. III, which blends their pop and rock style. HAIM is comprised of sisters Este, Danielle, and Alana Haim, who are pushing for more representation in alternative and rock music. Youngest sister Alana told AP News, “Whether we win or lose, there will be a lot of tequila happening.”

2. Beyoncé has THREE Opportunities to Make History (Which is Pretty Historic in Itself)

3. Mickey Guyton is the First Solo Black Woman To Be A Country Nominee

Country music has always had a diversity problem, but Mickey Guyton made history in and out of the genre with her instant hit “Black Like Me,” which reflects on her experience as a Black woman in America. Her nomination for the Best Country Solo Performance marks the first time a Black woman has been nominated in the category. (Back in 1964 and 1976, the Pointer Sisters were nominated for Best Country Vocal Performance by a Duo or Group, which was the first and only time a group of Black women was nominated in the category.)

4. Taylor Swift Could Become the First Woman to Win Album of the Year Three (3!) Times

Folklore was the first of two surprise albums Swift dropped during quarantine, and after critical acclaim, it's been nominated for Album of the Year. If she wins in this category, she will be the fourth person and the first woman to win this award three times. She is also nominated for five other awards this season, and is currently working on re-recording her entire discography.

The Grammys will be held on Sunday, March 14, 2021 at 8 pm. Tune into CBS or the Paramount app to watch live. But if you don’t get the chance to watch, don’t worry: BUST will give you a rundown of the most important moments.

Andra Day Reveals Why She Required Months Of Forced Rest After Making The US Vs. Billie Holiday: BUST Interview