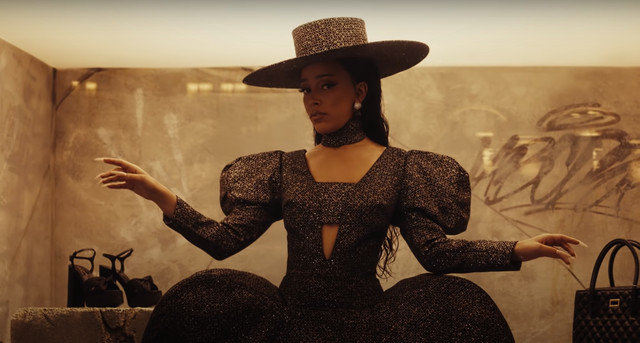 It’s only fitting that Doja Cat’s video for “Streets” opens up with her doing the famous #SilhouetteChallenge that has spawned almost 400 million views on TikTok. The challenge consists of a person standing in front of a doorway, while a snippet of the song “Put Your Head On My Shoulder” by Paul Anka plays in the background. The audio then transitions into “Streets” and the video cuts to the person dancing sensually to the music. Only their silhouette is shown with mood lighting to accompany the vibe of the song. Many different variations (both comical and artistic) have surfaced on the app of this challenge.

ok i did it

After generating enough hype for the release of the video on Sunday through a teaser trailer on Twitter and Youtube, Doja released the video on Monday, and it has already earned more than eight million views in the past 48 hours. Directed by Christian Breslauer and co-starring Kofi Siriboe, “Streets” showcases Doja in her true, sensual, artistic element.

Set in a sleazy, metropolis city during night time, “Streets” tells the story of a taxi driver stumbling upon a mannequin that resembles Doja. It leads into a four-minute fantasy world of Doja seducing and enticing the man, essentially showing what life could be like if they were together. His imagination and the video soon come to an end when the driver snaps back into reality, and it is revealed that he is taking Doja to her destination.

The single comes from her sophomore album, Hot Pink, a project dedicated to sexuality and womanhood. Making her debut with her first album, Amala, back in 2018, Doja has proven time and time again that she is a force to be reckoned with. And rightfully so, as she has been making her name in the industry over the past couple of years with hit singles such as “Say So” and “Juicy” (both including powerful remixes) and her recent collaborations with Saweetie and Ariana Grande. However, most fans are preparing for the release of her newest installment, entitled Planet Her, which has been rumored to be set for release sometime this summer.

The album was teased during an interview with the VMAs after she won Best New Artist, in which she stated that “it will be similar to Hot Pink and that each song will have its own personality and sound.” Fans can expect to hear a combination of dancehall, funk, afro beats, and house as the main genres for the project. As she is known for her multifaceted and versatile approach to her craft, Doja’s hope is to “cover all bases” with the newest release.

"We Persist, We Flourish": Artist Candice Hoyes Opens Up About Her Newest Single