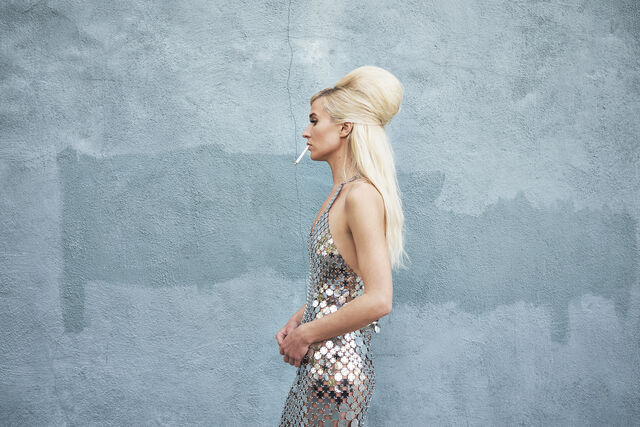 Today, Feb. 24, marks the release of the record’s second single, “Shine Your Light On Me.” The song’s accompanying video is a nostalgic, black-and-white fever dream, sparkling with vintage Paco Rabanne sequins and largely inspired by a 1967 performance of “Reflections” by Diana Ross & The Supremes. Bergman enlisted her ex-boyfriend, Jean Lebrun (a.k.a. theOGM of hardcore hip-hop group Ho99o9), to shred on guitar, and her first L.A. friend, Brooke Shepherd, to provide backup dance moves and choreography. She dreamed up the video’s set design with Hanrui Wang, who translated it into a reality made up of glinting mirrors, hypnotic shadows, and graphic art.

Despite her collaborative spirit—and her claim to fame alongside her brother, Elliot, in the psych-pop duo Wild Belle—Bergman describes Mercy as a “solo mission.” She wrote, produced, and mixed the record in a solitude dictated not by the COVID-19 pandemic, but by a more personal tragedy.

One night in October 2019, Wild Belle was getting ready to go onstage at Radio City Music Hall when the siblings learned that their father and stepmother had been killed by a drunk driver. “I… knew that there [were] basically two options, like I could either crawl into a cave and die, and just, like, lose myself to drugs and alcohol... that’s one option when you’re dealing with heartache,” Bergman says. “Another option is to get out of the darkness and find the light, and find the hope, and that’s actually kind of the harder route to take… I have gone the other way [before], and that just doesn’t work out for me, so I found a new path to move forward and see the goodness in this world. And there is a lot of goodness.”

Instead of crawling into a cave, Bergman retreated to the Monastery of Christ in the Desert in New Mexico’s Chama Valley. Despite the monastery’s location, Bergman found herself surrounded by frost and snow. She hid out in her “cell,” which consisted mostly of a twin bed and a desk, and didn’t speak to another soul for weeks. “You sort of are forced to go into a perpetual state of listening,” she says. “You’re sitting with your thoughts, you’re living with your prayers, your fears, your sadness, your hopefulness. There [was] really an amalgam of emotions happening in my soul, and I got to expose myself to those emotions and ask questions. I had a lot of questions about heaven, and it was important that heaven existed to me... I was rewarded with answers by doing that silent work.” 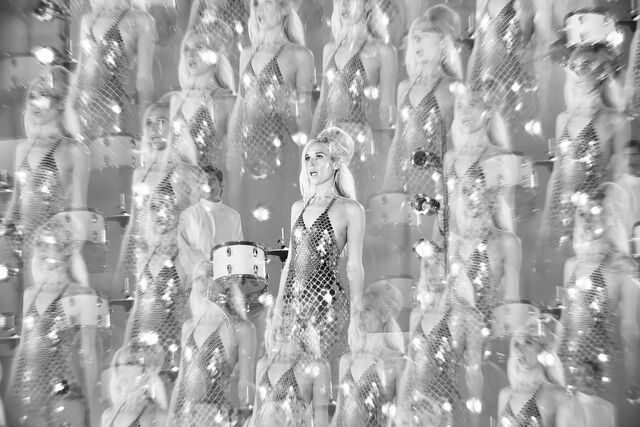 While Mercy began as a desperate prayer, the end result sounds like salvation. The singles Bergman has released so far—“Talk to the Lord,” “I Will Praise You,” and “Shine Your Light On Me”—are decidedly uplifting and hopeful. The music video for “Talk to the Lord” is a saturated Super 8 film bursting with playful art that was inspired in part by Sister Corita Kent, a radical nun and ‘60s pop artist who Bergman says “really led with love in all of the art that she made.” The video’s handmade flags were modeled after “very rock 'n' roll” banners created by Bergman’s mother, which hang at the family’s church back in Chicago. Bergman describes the creation of Mercy as her “journey to find [some] sort of heaven while we’re here.”

Many of Bergman’s musical “favorites,” from Aretha Franklin to Johnny Cash, grew up in church pews. She cites jazz artist-turned-swamini Alice Coltrane as an inspiration; deems John Coltrane’s free-jazz journey to redemption, A Love Supreme (1965), “one of the most profound albums of all time”; and credits the former couple’s art to their deep spirituality, which took root in the Black churches they grew up in. Church is where many people get their first immersion not just into faith, but also into music—which is why Bergman sees it as the genesis of rock 'n' roll.

“[Church has] always been sort of rock 'n' roll to me, because I grew up in a very liberal, accepting family,” Bergman says. “There’s a lot of negative, horrible things that happen in the name of God and in the name of religion…. like these radical hooligan terrorists that are, like, storming the Capital. That’s just so different from how I grew up and what my message is. Some of these people that are talking about Jesus are the antithesis of Jesus. Jesus’ message was love, and he would be hanging out with all of the freaks and the lepers and Blacks and the LGBT community. That’s the Jesus I believe in.”

Mercy will be out on May 7 via Third Man Records.

Five Women Who Shaped Motown Soul: Not Just Pretty Faces, But The Heart of Hitsville U.S.A.

Genya Ravan's "I Who Have Nothing" Melds Gold, Gravel, And Guts

Tags: Natalie Bergman , Wild Belle , Jack White , Third Man Records , Mercy , Shine Your Light On Me , gospel
Support Feminist Media!
During these troubling political times, independent feminist media is more vital than ever. If our bold, uncensored reporting on women’s issues is important to you, please consider making a donation of $5, $25, $50, or whatever you can afford, to protect and sustain BUST.com.
Thanks so much—we can’t spell BUST without U.