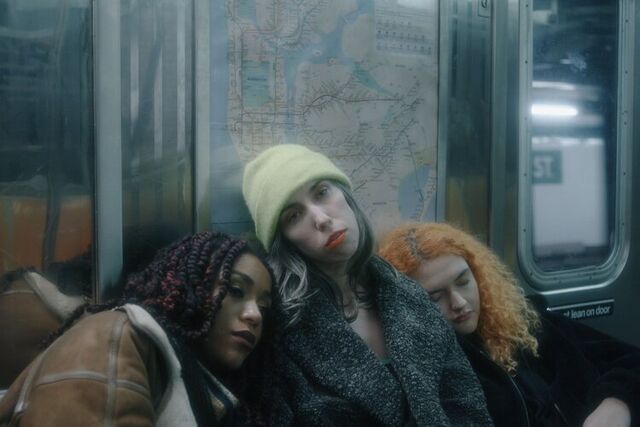 Relive a New York City night out with Puck's first single, "Good Friends." Equal parts nostalgia-inducing and danceable, this track will remind you of the good old days —a small dark club, the thrill of a crush, glitter down your bra, and a tipsy subway ride home. Read on to learn more about Puck and how "Good Friends" came to be.

It feels amazing to be putting out my own work. It's something that I've wanted to do for a very long time, but I let perfectionism get in the way. I really thought I had to be a virtuoso, or have certain people's approval to be allowed to make my own art. It was actually watching SZA that helped me break out of that mentality.

Was a solo career always something you aspired to do? Or was it something that happened along the way?

Since I was 15. The day I decided to be a musician was after going to a concert with my friend growing up in Seattle. It was Modest Mouse at The Paramount. I kept thinking about how what they were singing made the whole room feel the same thing at the same time. And how going to the show was hypnotic and it took me out of my regular thoughts into a different place in my mind. And how everyone else looked like they were going through something similar. Before then, I was dead set on marine mammalogy.

"Good Friends" has an incredibly familiar vibe — everyone can relate to that sort of murky in-between relationship that inevitably requires a night out with your friends to blow off some steam. How did it feel to re-create one in the midst of COVID?

It's actually really crazy because we filmed this at the very end of 2019. COVID was international news, but it wasn't in the U.S. yet. I wanted to make a video that captured a night out in New York, and I asked my music community to come be in it. I wanted to record a moment in my life. Dropping it now hits in a way different way than I anticipated; my eyes need to watch us dancing now. That was one of my favorite things to do with my friends. Going to each other's shows or just going out dancing at a bar and throwing down.

Tell me about Space People. Who are they? How did you link up? What was collaborating with them like?

Space People is Davy Levitan, who is a guitarist and producer from New York. He music directs and plays with Gabriel Garzon-Montano, and produces with a bunch of people in our music scene. I went over to his house to make some beats to give to a singer. He laid drums, I added keys and bass, he played guitar. I was playing around and I started singing "five seconds from feeling" and "I've been loving you" and the song kind of landed on me. I filled in pieces of melody, and more lyrics came. When I realized what I was writing about, I just kind of went for it, and it was a Puck song.

The video has this bubble-gummy surrealist quality to it thanks to Silkblade's production style. What drew you to them as a company and how do you think the visuals enhance the song? Was this always how you imagined the song would translate into video?

Silkblade worked on a project with my friend NAIMA. I loved how dreamy and surrealist everything looked. I met up with Silkblade and we talked about the song, and how I wanted to act it out in a video over the course of a night out. I love the way they adapted it. My community totally showed up for me in it. I produced it myself off money from a coffee job, so I asked some friends to DJ at C'mon Everybody and I asked people to come dance. The cast is made up of close friends and actors. It's really special the way it all came together.

Can you tell me a bit about your creative process and how you find inspiration for your music?

Oftentimes, I'm helping an artist complete a song or helping a live show come together, so when it comes to my music, I like to relax into exploring and try to discover it rather than build it. I like building sounds that are unfamiliar but warm. And at the end of the day, being from Seattle, I'm an indie kid at my core, so I'm always thinking about how something can be performed with a band. I started my band with Evan Lawrence on bass, and David Frazier Jr. on drums. It's kind of part piano trio, part grunge trio.

I have to know, what ended up happening with the friend you were crushing on?

Haha, well, actually, he wound up being one of my greatest friends. He's shown up for me in massive ways over the past few years. Back in 2017, I didn't know how to talk to him, so the song came out of me. It was a relief to be mischievous and make a whole music video about something neither of us would speak about head-on. I showed him the video a couple of weeks ago and he thought it was awesome. We've been through big things together and stuck by each other. He's rare. I'm grateful he's in my life.

Any advice on how New Yorkers can keep supporting independent artists?

No matter where you live: listen to your local music scene. The talent is crazy in New York right now: I.G.B.O., Melanie Charles, Madison McFerrin, Nick Hakim, KeiyaA, Gabriel Garzon-Montano, ONYX Collective, Bathe, Nappy Nina, Dane, Quinton Brock, atlopalo, Duendita, Kala and the Lost Tribe, NAIMA, and so many more. So many musicians in New York are producing and playing with big names, performing on Saturday Night Live and Good Morning America. These are musicians that have toured with SZA, Action Bronson, Prince, Moses Sumney, Macklemore, Amber Mark, playing in their bands. It's the intersection of the jazz scene, New York kids, music school kids, beatmakers. We can really play. We're just waiting for everyone else to notice.

Will we hear more from Puck in 2021? Any other projects in the works?

What are you most looking forward to in a post-pandemic world?

I can't wait to play shows again. Big tours and the local scene in New York and Seattle. I love putting bills together with my friends. I.G.B.O. was throwing this annual barbecue for the last few summers before the pandemic and it was epic. Everyone would play and smoke and dance and eat. Party. I just want to play hella shows with my friends.

Check out the music video for "Good Friends" below.

La Chica's "La Loba" Is An Anthem For She-Wolves

Tags: Brooklyn music scene , Puck , SZA , Silkblade , Independent artist
Support Feminist Media!
During these troubling political times, independent feminist media is more vital than ever. If our bold, uncensored reporting on women’s issues is important to you, please consider making a donation of $5, $25, $50, or whatever you can afford, to protect and sustain BUST.com.
Thanks so much—we can’t spell BUST without U.