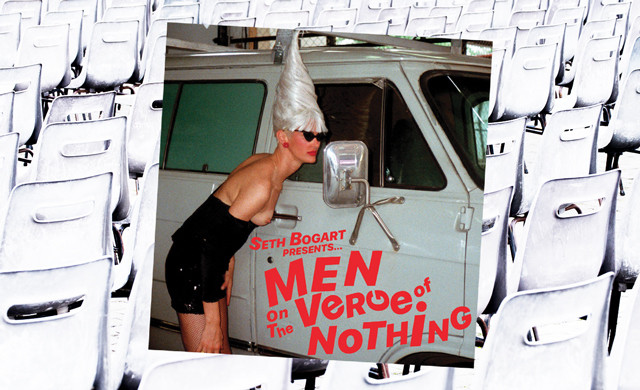 “Mr. Know-It-All is always right/And I think the only way out of this, is somehow they lose all their power,” multimedia artist Seth Bogart muses on the title track of his second solo LP, summing up the album’s underlying theme (and what the culturally and intellectually evolved children of this hell-world have already figured out): the patriarchal systems in which we are all raised are total bullshit! Men on the Verge of Nothing contains 10 fuzzy, post-punky, poppy tracks featuring a girl gang of guests including Roxanne Clifford (Patience, Veronica Falls), Tobi Vail (Bikini Kill, the Frumpies), and Alana Amram (Hunx and His Punx, Habibi), with Kathleen Hanna and Kate Nash on the superbly reimagined X-Ray Spex cover “Oh Bondage! Up Yours!” Men on the Verge reveals a more mature, yet clever-as-ever Bogart—honing his millennial gay-boy wisdom, camp, and grit to deliver possibly his finest work to date. –Maria Cecilia

Men on the Verge of Nothing
(Wacky Wacko)

La Chica's "La Loba" Is An Anthem For She-Wolves

Tags: Seth Bogart , Men On The Verge OF Nothing , Album , Pop