La Chica's "La Loba" is An Anthem for She-Wolves 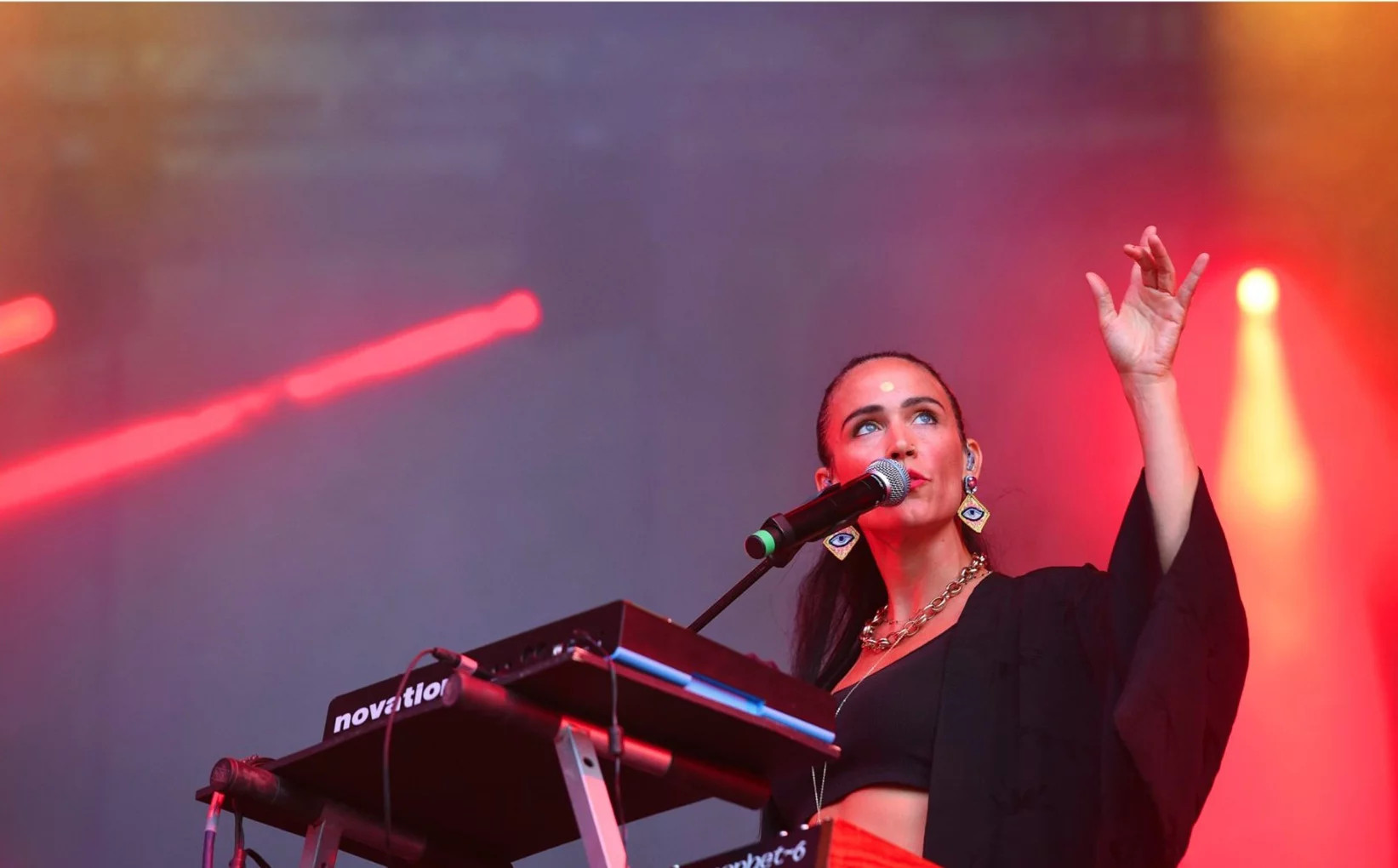 What do you think of when you see the color red?

Sophie Fustec is a pianist and musician who grew up between Venezuela and the French neighborhood of Belleville. She created the moniker La Chica to fulfill her cravings for artistic freedom and expression, while reflecting upon the current political climate and serving as a voice for women in the music industry. Building onto powerful synth melodies, Fustec heavily incorporates her Franco-Venezuelan roots and Latin American heritage into her lyrics.

La Chica lives and breathes in technicolor. The music video for “La Loba,” the title track of her most recent album, is a work of art encompassed by the most vibrant, violent, and defiant shade of roja.

Throughout the music video, Fustec asserts herself as a dominant alpha figure while simultaneously maintaining her femininity, engaging in activities typically reserved for men without erasing the outward qualities of her womanhood. In one scene she is shown sprawled on the living room couch, watching cartoons in lingerie while smoking a fat cigar. In another, she sits atop a motorbike holding a bouquet of roses after taking off the racing helmet.

Only after the seventh or so viewing did I realize the end sequence represents a literal birthing. During the song’s crescendo, the video rapidly alternates between the various activities Fustec engages in, culminating in pulling open the lacy red bedroom curtains as if it’s a vagina, leading to a tunnel of light which reveals Fustec’s blood-covered face staring into the light with the innocence of a newborn child, experiencing life for the very first time. This is meant to parallel the crowning of a newborn from the mother’s vagina. The visuals beg to question: How can the face of purity be surrounded by so much violence at the same time?

It is never explicitly stated where the blood originates. However, the piercing imagery immediately calls to mind the infamous misogynist comment Donald Trump made about Megyn Kelly that angered both liberals and conservatives all over the nation: “You could see there was blood coming out of her eyes, blood coming out of wherever.”

For years, the menstruation cycle has been rendered “taboo” by the general public, deemed inappropriate for public discussion, and used as an excuse to paint women as overly emotional and psychotic. Even now, buying a box of tampons or pads at the local pharmacy is somehow a shameful activity that requires brown paper packaging at checkout. But what many fail to acknowledge, is that the menstrual cycle allows women to bear children. Without women and our vaginas, there would be no one to bring life onto this planet! La Loba travels the world to pick up the bones and reconstruct humanity. Touching on the concept on Instagram, Fustec writes that the song is “... a story about recreating life and rekindling a woman's spirit, fighting against patriarchal forces.”

Some say the last thing you see before dying is a flash of white light. In many ways, quarantine has been like death. The majority of us have had to give up or give pause on projects we looked forward to in this new decade. Many of us have lost loved ones to the deadly Coronavirus. All of us have traded human touch and intimacy on some level, in favor of masking our faces, staying home, and keeping a safe distance from reality. In a world that is already tremendously difficult for women and, after all these years, still under the shadow of gender inequality, one can’t help but wonder: Will we as a whole ever recover from this massive setback?

The album La Loba comes after the devastating loss of Fustec's brother Pablo, who died on July 5th while trying to save his dog from a scalding hot spring in Mexico. From this grief, she was able to discover hope and clarity in music, humanity, and the future. On Instagram, Fustec states that she made this album in isolation with just “my voice, my hands, and my piano.” The stripped-back wheel of emotions incorporated into the songs are impossible to miss: raw vocals against heavy piano, mixed with the occasional roar, while the weight of the melody is balanced by hand-claps, and sprawling lyrical Spanish.

The sensory sounds and visuals of “La Loba” are as beautiful as they are jarring, much like a bloated belly leading up to the birth of a child. Ultimately, the bright red blood Fustec showcases in the music video is not for shock value, it’s a blatant feminist statement — Yeah, there’s blood all over me… the very type of blood that gave you life.

Ramona Salt is an editorial intern at BUST who loves to sing, dance, paint, and watch movies.

Tags: music video , La Chica , Spanish , menstruation , blood
Support Feminist Media!
During these troubling political times, independent feminist media is more vital than ever. If our bold, uncensored reporting on women’s issues is important to you, please consider making a donation of $5, $25, $50, or whatever you can afford, to protect and sustain BUST.com.
Thanks so much—we can’t spell BUST without U.