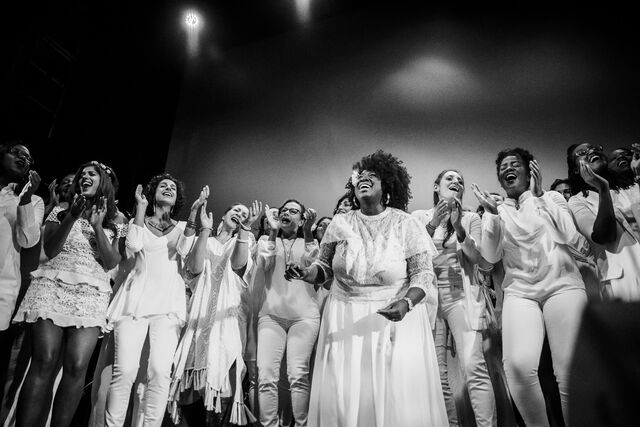 The Resistance Revival Chorus’ debut album could not have come at a better moment. This Joy, out today via Righteous Babe Records, provides exactly what we all need at such a pivotal and uncertain time—hope.

A collective of over 70 women and non-binary activists, the Resistance Revival Chorus was founded in the wake of the 2017 Women’s March. Their aim has always been to uplift the voices of women and non-binary people, especially people of color, through protest songs. Since their formation, they’ve backed Kesha at the Grammys, sung Spanish lullabies outside a New York holding facility to migrant children detained inside,  been shouted-out by Alexandria Ocasio-Cortez, and even performed at BUST's 25th Anniversary party!

For the album’s release, the Resistance Revival Chorus premiered a video for “I Hope” featuring Meah Pace.

This Joy was recorded in New York City amid COVID-19 quarantine and Black Lives Matter protests, but the chorus still managed to find a way to come together. The album combines original songs written by the chorus as well as covers of classic protest songs, including “All You Fascists Bound To Lose” by Woody Guthrie. In a statement, producer Tiffany Gouché said “Working with the chorus last year was one of the most healing and rejuvenating experiences I’ve ever had in my life. It was simply love manifested. You can feel the joy and sincerity in their hearts through each and every record. I am truly blessed and humbled by this experience and look forward to anything that pertains to them.”

The album powerfully opens with “Say Her Name” featuring Abby Dodson. The song reminds us all of the Black lives that have been lost at the hands of police throughout the United States. The chorus of voices read out the names of Black women who have been murdered, including Breonna Taylor, Alexia Christian, Tanisha Anderson, and Yvette Smith. The names are first read out one-by-one, and then slowly, the voices begin speaking over each other. “Say Her Name” is reminiscent of “Hell You Talmbout,” a similarly moving protest song written by Janelle Monáe and the Wondaland Records collective in 2015.

The title track, “This Joy,” transforms frustration and outrage into positivity. The chorus of voices sing “This joy that I have / the world didn’t give it to me / I said, the world didn’t give it / the world can’t take it away.” The song’s emphasis on making one’s own joy and peace is an important message, especially today. It can be so easy to feel hopeless and to focus on our anger, anger that is rightfully felt and needs to be voiced. But we also need to remember to take care of ourselves and each other—the Resistance Revival Chorus shows us that this strength is the only way that we can enact change.

This Joy is available for streaming on Spotify and Apple Music.

Tags: Resistance Revival Chorus , Righteous Babe Records , album review , black lives matter , police brutality
Support Feminist Media!
During these troubling political times, independent feminist media is more vital than ever. If our bold, uncensored reporting on women’s issues is important to you, please consider making a donation of $5, $25, $50, or whatever you can afford, to protect and sustain BUST.com.
Thanks so much—we can’t spell BUST without U.