There is no question that last night’s Billboard Music Awards stood out from previous years. Not only did the event, which takes place in L.A.'s Dolby Theater, happen without a live audience, but stars such as Demi Lovato, Lizzo, and Killer Mike used their platforms to highlight important current and political issues. In case you missed it, here are some of the most noteworthy moments.

Lovato’s performance was illuminated in front of a message, displayed in block letters, which read "VOTE!" and was not broadcasted on NBC. However, Lovato still got her message across. “Commander in Chief, honestly/If I did the things you do/I couldn't sleep, seriously/Do you even know the truth?" she asked. "We're in a state of crisis, people are dying/While you line your pockets deep/Commander in Chief/How does it feel to still be able to breathe?”

Despite receiving backlash on social media, with fans advising Lovato keep politics out of her performance, she fired back. “You do understand as a celebrity, I have a right to political views as well?" she wrote on her Instagram Story. "I literally don't care if this ruins my career. This isn't about that. My career isn't about that. I made a piece of art that stands for something I believe in.”

Following the song’s debut, Lovato released the music video, with the caption on Instagram: “I'm calling on all of you, please join me in voting for this year’s election. Find your voter information at iwillvote.com.”

2. Lizzo accepted the Top Song Sales Artist Award while reminding fans to channel their inner power and get out and vote. 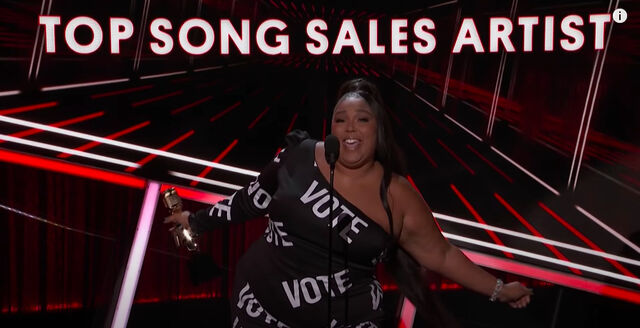 “When people try to suppress something, it’s usually because that thing holds power. They’re afraid of your power. There’s power in who you are, there’s power in your voice, so whether it’s through music, protest, or your right to vote, use your power, use your voice and refuse to be suppressed,” Lizzo said. She also wore a one-shoulder black dress with “VOTE” printed in bold letters throughout. 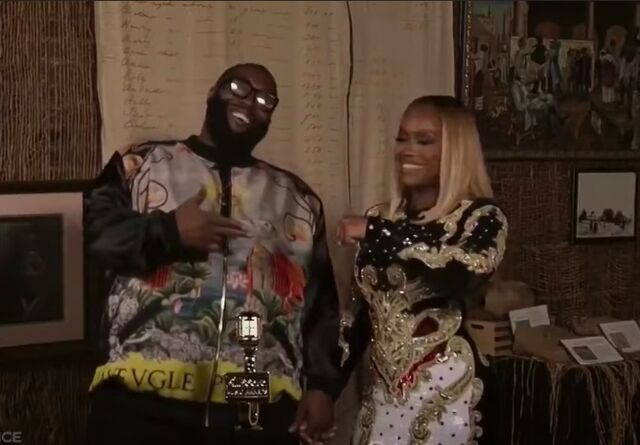 The award was presented by Keisha Lance Bottoms, the Mayor of Atlanta, Killer Mike's hometown. In his speech, Mike said, “Kids out there that sing and dance: What you do is worthy…You are artists and your goal should be to express the very reality around you in the very most beautiful or ugliest of ways you see fit. Kids who run and dance and sing and jump and all that, all the things they tell you don't matter -- you matter more than you know.” 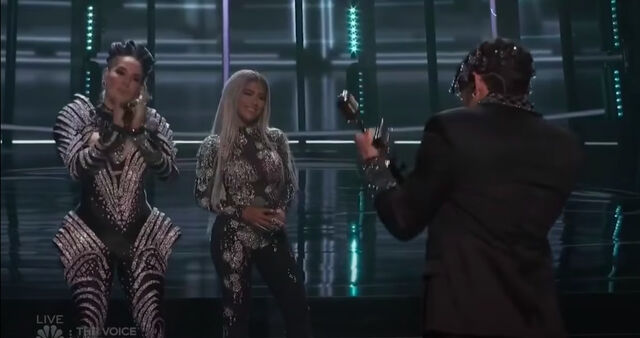 The singer said, “Without you, there wouldn’t be anything, nothing, nothing; not music, not reggaeton, nothing.” Behind him stood Ivy Queen and Nesi, two prominent women reggaeton performers. 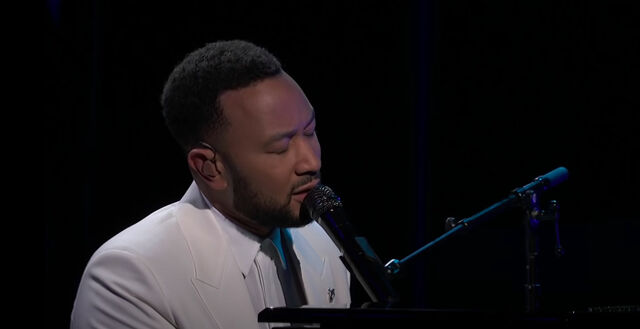 Legend performed his song “Never Break,” off of the album Bigger Love, starting, “This is for Chrissy.” The couple recently shared news of the loss of their son, Jack, only a month into Teigen’s pregnancy, and Teigen was praised for openly discussing her miscarriage, and the grief surrounding it, on social media.

We are shocked and in the kind of deep pain you only hear about, the kind of pain we’ve never felt before. We were never able to stop the bleeding and give our baby the fluids he needed, despite bags and bags of blood transfusions. It just wasn’t enough. . . We never decide on our babies’ names until the last possible moment after they’re born, just before we leave the hospital. But we, for some reason, had started to call this little guy in my belly Jack. So he will always be Jack to us. Jack worked so hard to be a part of our little family, and he will be, forever. . . To our Jack - I’m so sorry that the first few moments of your life were met with so many complications, that we couldn’t give you the home you needed to survive. We will always love you. . . Thank you to everyone who has been sending us positive energy, thoughts and prayers. We feel all of your love and truly appreciate you. . . We are so grateful for the life we have, for our wonderful babies Luna and Miles, for all the amazing things we’ve been able to experience. But everyday can’t be full of sunshine. On this darkest of days, we will grieve, we will cry our eyes out. But we will hug and love each other harder and get through it.

Legend sang, “Whenever life is hard/We'll never lose our way… I just know I'll always follow the light in your heart/I'm not worried about us/And I've never been/We know how the story ends… We will never break/Built on a foundation strong enough to stay… You are the explanation of what love really means/It's bigger than you and me/It's one plus one equals three/When we talk about forever/Then forever's what we mean.”

Images: Screenshots of the BBMAs from NBC's YouTube livestream

Tags: bbmas , demi lovato , nbc , trump , voting , elections , lizzo , music , NBC , singer-songwriter , events , popculture
Support Feminist Media!
During these troubling political times, independent feminist media is more vital than ever. If our bold, uncensored reporting on women’s issues is important to you, please consider making a donation of $5, $25, $50, or whatever you can afford, to protect and sustain BUST.com.
Thanks so much—we can’t spell BUST without U.