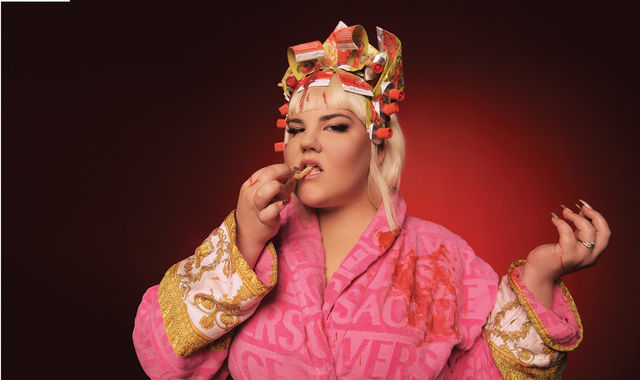 After winning the Eurovision Song Contest in 2018 and amassing a worldwide following, sensational 27-year-old Israeli singer-songwriter Netta set to work transforming pop music as we know it. Her dance-worthy anthems, often layered with dizzying electronic vocal loops (which she creates live in performances), are brimming with positivity. And so was she when we caught up via Zoom to chat about everything from self-celebration to the power of gibberish.

I’m trying to hold on like when you’re on a rollercoaster—trying to deal with high-voltage life. If once upon a time I could be really chill about stuff, now it’s like robbing a bank. I’m making a lot of decisions in a really short period of time, trying not to give up my artistic integrity, and trying to reach as many people as I can.

You’ve said that your contest-winning song, “Toy,” was inspired by the #MeToo movement. Do you incorporate feminist themes in your work a lot?

It’s a song about everybody, not just women. A song for everybody who has been talked down to by a bigger force: the government, their boss, kids at school. I really believe that “Toy” is bigger than just the #MeToo movement. My feminism is a happy one. It’s like gay pride. It’s a protest, but it’s a protest with love and celebration and a party. I would like to celebrate myself and say, “Hi, I’m here. I love you, and you should love me back.”

What were the influences behind the song “Ricki Lake” that you released earlier this year?

I try to celebrate my accent, my language, and where I come from—I believe that’s my power. When I hear English and all the interesting sounds that can be in it, the sounds sometimes are more valuable to me than the actual meaning. I come from jazz and scatting, so I use my own scatting language and then I try to put words into what I improvised. Usually I can’t find words so I just live with gibberish. My complete dream is to do a full album in gibberish. Lyrics? Please. We don’t need them. The power of percussive gibberish and the melodies excite me—they move me.

Your latest single, “Cuckoo,” has a totally different vibe from your previous work. How did that song come about?

I met an amazing girl named Krysta Youngs. Her roommate, Bert Elliot, wrote it with us and brought in a really beautiful beat. When he played me the draft I started crying. It was the first piece of music that moved me to tears that I’ve recorded. It’s the first time I’m actually revealing a serious piece of my heart. This world is so fake. People think it’s very glamorous, but it’s all basically corridors and people with headphones and boxed wine. So “Cuckoo” is about everything. It’s about my entire life and the dissonance of what people think it is and what it really is. What people say I should feel and what I really feel. I am very proud of what came out. It’s a real piece of my gut and my soul and I hope people can relate.