Why Lesbians Are Freaking Out Over Taylor Swift's New Album, "Folklore" 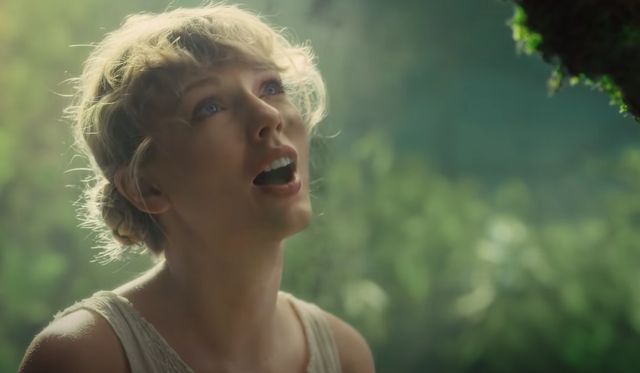 Strap in, fellow dykes. In the midst of quarantine, Taylor Swift came out of nowhere and said she was dropping an album only 16 hours after announcing it. Her eighth studio album, Folklore, is not only a collection of songs she poured her “whims, dreams, fears, and musings into,” but a sapphic masterpiece.

Surprise ? Tonight at midnight I’ll be releasing my 8th studio album, folklore; an entire brand new album of songs I’ve poured all of my whims, dreams, fears, and musings into. Pre-order at https://t.co/zSHpnhUlLb pic.twitter.com/4ZVGy4l23b

I almost feel like I should write an itemized list of all the queer girl easter eggs Swift is hiding. Everything about the album’s aesthetic screams cottage core. In the “cardigan” video, which she released alongside the album, Swift is depicted cozily playing piano in a cabin which we would all love to escape to with our forbidden femme lover. And then she’s transported to an enchanted forest? She has to know what she’s doing.

But what really tugs at my queer heartstrings is the songwriting, particularly the 14th track, “betty.” The song is told from the perspective of James, a high school student in love with a classmate named Betty. I don’t wanna hear any of the heteronormative BS that the male POV still makes it straight. LGBTQ+ artists have historically used coded language and symbols to portray their relationships, which includes changing names and pronouns.

What’s so heartachingly beautiful about “betty” is the way it encapsulates young queer love. The song portrays the aftermath of an intense relationship, one that James isn’t quite over. But Betty’s sudden change of heart and ability to move on leaves him heartbroken. “Plus, I saw you dance with him” seems to really get to the core of wlw experiences. You fall in love with a girl who plays along with it but ultimately decides that being with other girls isn’t for her. And seeing her with a boy absolutely breaks you. This one hit way too close to high school for me.

WHO IS BETTY? This album can live rent free in my mind forever ❤️?HOLY FUCK BETTY BY @taylorswift13 IM DECEASED! #Folkore #TaylorSwift pic.twitter.com/cBQ0itoBzw

As a wise woman once said, there’s no straight explanation for “illicit affairs.” The song is about a secret relationship between two people: “Leave the perfume on the shelf/that you picked out just for him/so you leave no trace behind.” I rest my case.

But what’s so relatable to us sapphics is the stolen glances and yearning for something you can’t have. How a “straight” person like Taylor Swift can capture these feelings is beyond me. The clandestine nature of this relationship, from meeting in parking lots to hiding from friends and family feels so intimate and raw, like falling in love with a woman even though you’re not supposed to.

And the “secret language” of this relationship is strangely reminiscent of the language that Céline Sciamma talks about in Portrait of a Lady on Fire.

#Folkore the only thing i’m gonna listen to today pic.twitter.com/TjXpPQ2m2S

Tags: Taylor Swift , Folklore , lesbian , album
Support Feminist Media!
During these troubling political times, independent feminist media is more vital than ever. If our bold, uncensored reporting on women’s issues is important to you, please consider making a donation of $5, $25, $50, or whatever you can afford, to protect and sustain BUST.com.
Thanks so much—we can’t spell BUST without U.