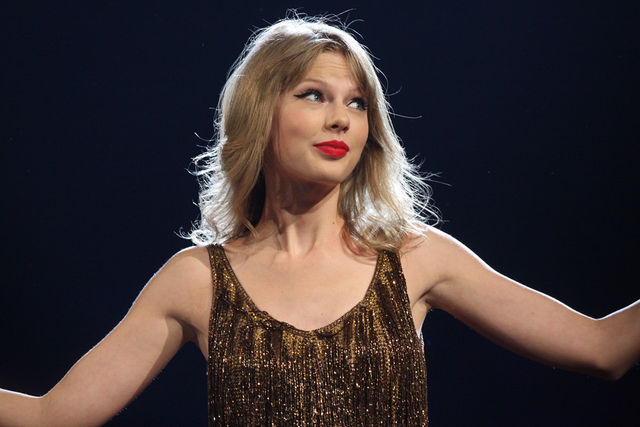 In 2019, Taylor Swift dropped her long-awaited seventh studio album, Lover, and less than a year later, she just announced that she’s releasing her eighth studio album called folklore. On Twitter, Swift described the record as “an entire brand new album of songs I’ve poured all of my whims, dreams, fears, and musings into.” The album will be released at midnight tonight.

Surprise ? Tonight at midnight I’ll be releasing my 8th studio album, folklore; an entire brand new album of songs I’ve poured all of my whims, dreams, fears, and musings into. Pre-order at https://t.co/zSHpnhUlLb pic.twitter.com/4ZVGy4l23b

She also took to Instagram, first posting black and white photos with no caption before telling everyone what was going on. In the caption, Swift says that many of the things she planned this year didn’t happen — likely referring to the Lover Fest concerts which were postponed because of the pandemic — but this album, which wasn’t planned, did happen. She said she’s collaborating with some of her musical heroes like Aaron Dressner, Bon Iver, William Bowery, and long-time friend and musical partner Jack Antonoff.

Most of the things I had planned this summer didn’t end up happening, but there is something I hadn’t planned on that DID happen. And that thing is my 8th studio album, folklore. Surprise ?Tonight at midnight I’ll be releasing my entire brand new album of songs I’ve poured all of my whims, dreams, fears, and musings into. I wrote and recorded this music in isolation but got to collaborate with some musical heroes of mine; @aarondessner (who has co-written or produced 11 of the 16 songs), @boniver (who co-wrote and was kind enough to sing on one with me), William Bowery (who co-wrote two with me) and @jackantonoff (who is basically musical family at this point). Engineered by Laura Sisk and Jon Low, mixed by Serban Ghenea & Jon Low. The album photos were shot by the amazing @bethgarrabrant. Before this year I probably would’ve overthought when to release this music at the ‘perfect’ time, but the times we’re living in keep reminding me that nothing is guaranteed. My gut is telling me that if you make something you love, you should just put it out into the world. That’s the side of uncertainty I can get on board with. Love you guys so much ♥️

Swift announced that the album would have 16 tracks on the standard edition and that she will be releasing eight different deluxe CDs and eight different deluxe vinyls for one week because this is her eighth studio album. Swift wrote all of these songs in isolation over the last four months of quarantine. The deluxe editions will have a bonus song entitled “The Lakes.”

The music video for the song “Cardigan” will premiere tonight, along with the album. Swift wrote and directed the music video and thanked her team in a tweet.

This was enough to send her fans into a frenzy. Soon enough, “Taylor” was trending on Twitter, along with her previous albums such as Lover and songs like “Cruel Summer.” Bon Iver was also trending because of his collaboration with Swift on this new album.

TAYLOR SWIFT LITERALLY WROTE AN ENTIRE ALBUM DURING QUARANTINE AND IS SURPRISE RELEASING IT??? CALL HER WHAT SHE IS AN ICON A LEGEND A QUEEN IM SHAKING OMG
pic.twitter.com/SFltDxkH66

taylor saw us putting safe and sound at #1 in our rankings and she was like hold on let me give you an entire album with the same vibe pic.twitter.com/J4uci5gVBR

TAYLOR SWIFT WENT FROM SPACING OUT EASTER EGGS TO SURPRISE RELEASING AN ALBUM ????? HOW ARE WE SUPPOSED TO BE FINE AHHHH. pic.twitter.com/98bWxnIG12

Fans of Taylor Swift, who are known to be very perceptive to things like easter eggs, suspect that one of the co-writers, William Bowery, could be her longtime boyfriend, Joe Alwyn, because one of the couple’s first meetings was at the Bowery Hotel in New York City and there’s little to no information about William Bowery.

? | Fans online believe that “William Bowery” who Taylor credited as a songwriter on folklore could actually be a pseudonym for her bf Joe Alwyn.

There is little to no info on a songwriter with that name, and one of the couple’s first meetings was at the Bowery Hotel in NYC. pic.twitter.com/k4ZEviVtmK

Fans of the singer are eagerly awaiting midnight when the album and the music video will be released. Folklore is available for preorder now.