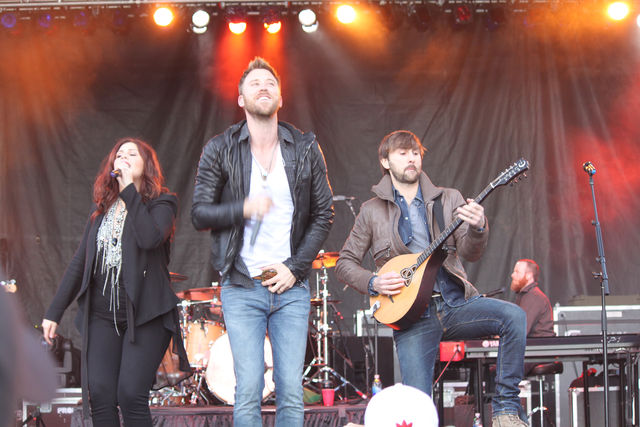 Lady A, the band formerly known as Lady Antebellum, is currently suing a Black blues singer, Anita White — who has also gone by Lady A for over 20 years — after they could not come to an agreement over sharing the name Lady A.

The band Lady A made the decision to change their name due to the word antebellum's ties to slavery. This was generally well-received at first, but there was a problem: there’s already a singer who goes by the name Lady A. In June, it was reported that the two had decided to share the name and they had a virtual chat.

Shortly after the chat, however, White told Newsday that she had received a draft of the agreement and "I'm not happy about [it] yet again after talking in good faith… Their camp is trying to erase me and I'll have more to say tomorrow. Trust is important and I no longer trust them."

Then, earlier this week, it was reported that Lady A the band was suing Lady A the singer over the use of the name Lady A. The band, who has had the name Lady A trademarked since 2011, is currently suing the blues singer after "White's new counsel delivered a draft settlement agreement that included an exorbitant monetary demand." In the lawsuit, the band says that "we have come to the conclusion that we need to ask the court to affirm our right to continue to use the name ‘Lady A’, a trademark we have held for many years."

The suit states that the band isn’t asking for monetary damages or for the blues singer to stop using the name Lady A and that the "plaintiffs simply wish that the parties continue to coexist." In the lawsuit, there seems to be no statement from White.

Many people are not happy about this lawsuit, as evidenced by the band’s Instagram comments on their latest post.

One Instagram comment reads, "Suing a black woman because you want to steal her name because you want to appear sympathetic to an anti racist movement. Not a great look." Another commenter added, "Do you all think that changing your name, and then suing a woman that has been using your new name for over 20 years is a good way to demonstrate your progression? This is performative white privilege and YOU SHOULD BE ASHAMED! Stop throwing your white power around against the Black community."

This seems to be a trend that we see far too much of: performative activism. People will post their black squares, use the #BlackLivesMatter hashtag in their Instagram caption, but when it comes to actually doing the work, they think they’ve done enough.

The blues singer hit on this before the suit began when talking to Rolling Stone. "This is my life. Lady A is my brand," she told the magazine. "I’ve used it for over 20 years, and I’m proud of what I’ve done...They’re using the name because of a Black Lives Matter incident that, for them, is just a moment in time. If it mattered, it would have mattered to them before. It shouldn’t have taken George Floyd to die for them to realize that their name had a slave reference to it. It’s an opportunity for them to pretend they’re not racist or pretend this means something to them. If it did, they would’ve done some research. And I’m not happy about that."

The name change came at a time when many were rethinking their branding in the wake of the Black Lives Matter movement. But it seems like the band cared more about looking like they weren’t racist than actually putting action behind their words. Many users on Twitter voiced their frustration with the band’s decision to sue White.

imagine changing your band name from lady antebellum to lady a because of its racist implications then suing a black woman, who has been using that stage name for literal decades, for the rights.

Lady Antebellum decided to change their name to Lady A because they’re woke now, only to find out a Black artist already existed under that name so now they’re suing to use the name anyways because they couldn’t come to a deal with her. Leftist virtue signaling in a nutshell. ??‍♂️ pic.twitter.com/pPHjkkdNxh

Lady Antebellum making a superficial change to cloak their white supremacist roots in civility then suing a black woman to steal her property is pretty fucking antebellum.

While Lady Antebellum filed for the “Lady A” trademark in 2010 and there were no objections at the time, I’m not sure the smart move here is to file a lawsuit against a black woman singer who has been using “Lady A” as her stage name for over two decades. https://t.co/3YYxvpmJd4

The changing of names is also what some would call crumbs — it might be in good faith, but it’s a distraction from bigger problems and it's not real change. In an interview with Don Lemon on CNN, WNBA player Natasha Cloud reiterated this point by saying, "Crumbs to me right now are t-shirts, are posts on Instagram...taking down statues of racist slaveowners that should’ve never been put up, taking down names of buildings on college campuses that should’ve never been named that. That’s crumbs, that’s what they’re giving to our community. That’s what they’re giving to us in order to [say], ‘Here you go, we gave you what you wanted...We’re giving you what you guys wanted.’ But no, I don’t want crumbs, I want the whole plate...That’s why I say, don’t get distracted by the crumbs."

This is also similar to a quote attributed to Malcolm X: "The white man will try to satisfy us with symbolic victories rather than economic equity and real justice." This is what many feel like most of the changes made recently are: symbolic victories. They’re not substantive changes, and merely distractions from the bigger problems that Black people face in America. The band changing their name might be a step in the right direction for some, but it feels like a hollow gesture and purely symbolic when they decide to sue the woman who has been known under the name for the last twenty years.

Performative activism has long been a problem, and the band Lady A certainly isn’t the only one guilty of it. But this incident points out the glaring problem we have with this kind of activism — while the name change may have been well-intentioned, the lawsuit makes us question the band's motives and allyship. If you’re only doing something in order to come off as "woke" or not racist, you’re not doing it for the right reasons. Allyship is most genuine when no one is looking.

Tags: Lady Antebellum , Lady A , performative allyship , country music , music
Support Feminist Media!
During these troubling political times, independent feminist media is more vital than ever. If our bold, uncensored reporting on women’s issues is important to you, please consider making a donation of $5, $25, $50, or whatever you can afford, to protect and sustain BUST.com.
Thanks so much—we can’t spell BUST without U.