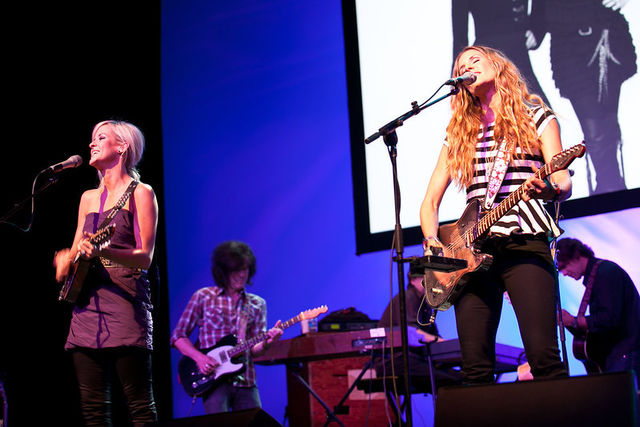 Amid the call for racial justice, we’ve seen lots of changes being made in various industries: Lady Antebellum changed their name to Lady A, Jenny Slate and Kristen Bell relinquished their roles voicing biracial black cartoon characters, and pancake mix giant Aunt Jemima will be retired due to its racist origins.

The Chicks, formerly known as the Dixie Chicks, are the latest to make this kind of change. The country trio has been around since 1989 and has made a name for themselves in the music industry since then. They are noted for being outspoken on issues, specifically against then-President George W. Bush and the war in Iraq, which got them blacklisted and boycotted. The backlash was huge for them and the term “Dixie Chicked” was coined to express the fear of rejection for speaking out, which was also touched upon in Taylor Swift’s recent Miss Americana documentary. Despite all of the backlash, they're back, and still as outspoken now as they were then.

On Thursday, June 25, the band quietly changed their social media handles to @thechicks. The word “Dixie” is a reference to the Civil-War era south and nostalgia for that time. Much like Lady A, the Chicks decided to drop the word associated with racist connotations. On the band’s website, the trio simply writes, “We want to meet this moment.” In a statement given to Pitchfork, a representative for the band said, “A sincere and heartfelt thank you goes out to 'The Chicks' of NZ for their gracious gesture in allowing us to share their name. We are honored to co-exist together in the world with these exceptionally talented sisters. Chicks Rock!”

Not only did the Chicks change their name, they also released a new protest song called “March March” that will appear on their upcoming album, Gaslighter. The music video just released for the song starts off with the quote, “If your voice had no power, they wouldn’t try to silence you.” The video features visuals of protests from past and current moments in history for causes such as the Black Lives Matter movement, the March For Our Lives movement, gay rights, women’s rights, and environmental rights. The names of Black people killed by police such as George Floyd, Breonna Taylor, and Tony McDade appear on screen throughout the music video. At the end of the music video, the Chicks encourage viewers to use their voice and vote and spotlight organizations such as Black Lives Matter, the ACLU, the Native American Rights Fund, among others.

“March March” is a powerful anthem from the Chicks about protesting for what’s right even when you’re an “army of one.”

The Dixie Chicks, My Texan Feminist Heroes, Are Back With a New Song