Details
BY Hayley Cain
IN Music
Published: 15 May 2020 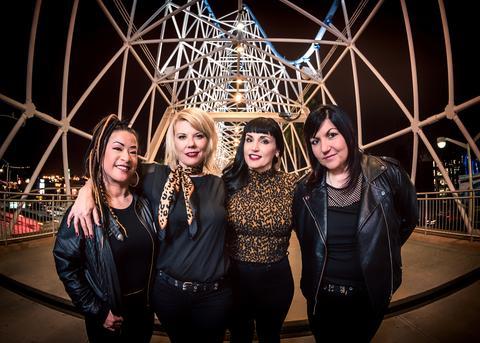 Leave it to SoCal punks Bad Cop/Bad Cop to tell us exactly what the world needs now. No, it's not simply “love sweet love,” but it is at least partly that. The band's new album The Ride (out June 19 on Fat Wreck Chords) trades the band's signature angry roar for a more sweet and sour mix of emotions, even delving into the territory of self-love (don't worry, they can still do it with a guttural snarl when they want to).

BUST is thrilled to premiere the band's second single, “Pursuit of Liberty,” one of the album's more fierce, in-your-face tunes.

The forthcoming album—featuring bassist/vocalist Linh Le, drummer Myra Gallarza and guitarist/vocalists Stacey Dee and Jennie Cotterill—might offer more introspection, but their sound has not lost an ounce of urgency. The guitars are still fat and distorted and the drums are still brutal as hell, the vocals commanding and soulful. However, a new inner light shines from the edges of these passionate battle hymns. Nowhere is that more apparent than in lilting album closer “Sing With Me.” Built around acoustic guitar, piano, and Cotterill’s voice, it invites the world to: “sing with me / or sing your own song / I don’t mind, just as long as you find / a voice.”

"These are political statements—self-love is a huge fucking statement," says singer-guitarist Stacey Dee. "Self-love means putting a fix on the problems at home before trying to fix everything in the world. It's asking people to find it in themselves to create the life that they really want to have so they're not in turmoil, so they're not in a place of stress and sickness."In 2018, Dee was hospitalized twice for different ailments, then discovered she had stage one breast cancer at the end of the year. Fortunately, it was highly treatable, but the experience was life-altering. Dee captures it with brutal frankness on “Breastless,” whose bright melodies belie the struggle described in the lyrics.

As Cotterill puts it, “Love is a more powerful truth than anger.” That positivity fuels many of “The Ride’s” tracks: “Originators,” “Simple Girl,” “Community,” “I Choose,” “Perpetual Motion Machine,” and “The Mirage” exude confidence, gratitude, and compassion.

I should note that the band’s 2017 full-length, “Warriors,” was recorded in the aftermath of the 2016 presidential election, so you can see why it'd come off a little more chaotic, angrier. If you ask bassist Linh Le, who penned and sang “Pursuit of Liberty” as well as “Certain Kind of Monster” (both blistering criticisms of the current administration’s treatment of immigrants), you need both a healthy dose of aggression and compassion to get anything done in this world.

As a first-generation Vietnamese-American immigrant, Le felt a need to get the mix of frustration and sadness off her chest.

“My family fled Saigon in 1975. Eventually, they received help to get them to the US, get them housed and employed. They were given a chance. So, why isn't the same thing still happening for everyone fleeing their danger?” Le says. “Why are we putting them in cages? It's repugnant. What happened over time where we lost all compassion? How have we gone from 'The Land of the Free' to "Build that Wall?”

She adds: “The song isn't about my family. I wrote this song to bring awareness to completely disgraceful treatment of refugees. My family's part in the song is just my way showing how personal it is to me. But the message is about all refugees.”

Le and I spoke more via Skype.

Tell me more about “Pursuit of Liberty” and “Some Kind of Monster,” and what was going on in your gut when you wrote these songs.

“Certain Kind of Monster” was a direct response to watching a video on Shaun King's Instagram...It was a clip of a family being raided by ICE. It's hard to explain how angry it makes me feel and how sad it makes me feel for them. Noticing the refugee crisis, and the people coming from Central and South America trying to flee their country—because they are in a position where they have to, and have no other choice...If  you don't know what that's like, you should be more compassionate to their situation. I think I would have talked about it regardless of whether my family had their own story or not. This topic, and the intensity of situation, is still swept under the rug.

“Pursuit of Liberty” seems to come from a more personal feel.

My family's firsthand experience brought on a whole different wave of emotions—of anger—and this feeling of “What can we do to help?” But you can only get so angry about things before it becomes completely unproductive. So, why not write something about it? I play in a band. This is the platform I've been gifted with. Not a lot of people are in this position, especially in the punk rock community. I give the example in “Pursuit of Liberty” of my family because it is the same situation. You are fleeing a situation where you stay and you're done, you can die, and you'd rather risk your family's life for another chance. That ambition, that drive—if you don't understand it, then you have no right to tell anybody that they don't have a chance to live here. I can't imagine what these people go through, just for a chance to give themselves a chance.

The emotion is pretty fierce and comes through!

It's been a big initiative for the band. We have a shirt that says “Abolish ICE” on the front and half the proceeds go to RAICES, which is a nonprofit advocacy group that goes to asylum seekers to get representation.

To your point about being so angry at times it can be unproductive, there is more talk of self-love on the album. Does it feel different to perform and record songs based more in a sense of love opposed to anger?

I think so. It's hard to write an angry song and come out of it happy, without any real solution. The refugee crisis, there's no solution to it now. Especially now.

So you need both: Anger and love.

Yeah, there needs to be a balance. And Stacey and Jennie are really good about writing about how much self-love has become such a beneficial asset for people getting through their day, especially now. That's also another topic that is sometimes swept under the rug, with mental health and everything. With me, it's a very difficult thing for me to write something personal, at this level. In the past, and similarly now, the songs I write about address topics I want to raise awareness and bring attention, to so that people know what's going on. When they say, “This is not my problem,” we can show them “no, this is your problem, too.”

Surprise, Agency, And Focus On Shopping's "All Or Nothing"

Rock Out Your Lockdown Angst With The Lippies’ New “On My Mind” Lyric Video: BUST Premiere

Tags: Bad Cop/Bad Cop , punk , song premiere , SoCal
Support Feminist Media!
During these troubling political times, independent feminist media is more vital than ever. If our bold, uncensored reporting on women’s issues is important to you, please consider making a donation of $5, $25, $50, or whatever you can afford, to protect and sustain BUST.com.
Thanks so much—we can’t spell BUST without U.