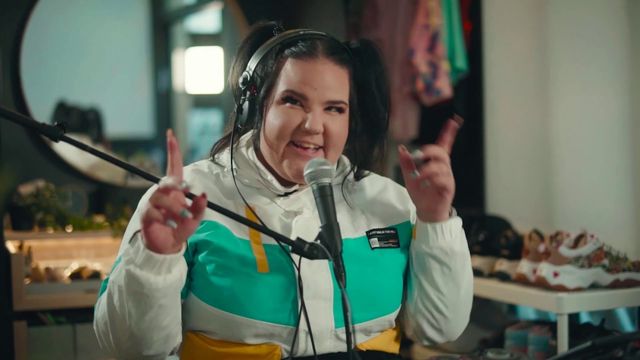 Since then, Netta has released 4 original songs and performed a handful of covers, but at the end of last year she shared that she had been experiencing “a lot of obstacles” when it came to making and sharing her music.

So, instead of struggling to record and release her music the conventional way, she invited her fans into her studio — aka her bedroom. There, she’s recorded musical covers and improvised songs to post on her YouTube channel. She calls these videos “NETTA’S Office” and has made them part of an episodic YouTube series.

In her first episode, “Coco Jumbo + Improv | NETTA’S Office: Ep. 1,” which she shared in December, Netta explained that these short “NETTA’S Office” episodes were really for her and her fans.

“I just want a free channel with my audience, like something really, really direct,” she said. “I really want to feel you. I really want to know you’re there and this is for you.”

“This is one crazy time to be alive, isn’t it? Coronavirus is running around the world and this is one hell of a crazy experience. I just want to salute to you all, and we’re going to get through this, and we all deserve a little bit of escapism,” she said in her latest episode of “NETTA’s Office,” before launching into her upbeat cover of Ray Charles' song “Don’t Need No Doctor.” Her series of improv songs were inspired by comments her Instagram followers left on a post where she challenged them to tag a friend and say why they deserve a silly song about them.

Netta told her followers, “The funniest 3 comments will get a special silly song about them.”

Netta’s videos are quirky, funny, and entertaining as heck, just like the singer herself. But Netta’s no longer the only one inviting her fans into her home. Since COVID-19 put a hold on life, canceling music tours and festivals, singer-songwriters and bands have begun to follow her lead, making and sharing music from their own homes via YouTube, Instagram, and TikTok.

Tags: Netta Barzilai , Netta's Office , YouTube , Corona Virus , Israeli , Singer , songwriter , funny , comedy
Support Feminist Media!
During these troubling political times, independent feminist media is more vital than ever. If our bold, uncensored reporting on women’s issues is important to you, please consider making a donation of $5, $25, $50, or whatever you can afford, to protect and sustain BUST.com.
Thanks so much—we can’t spell BUST without U.