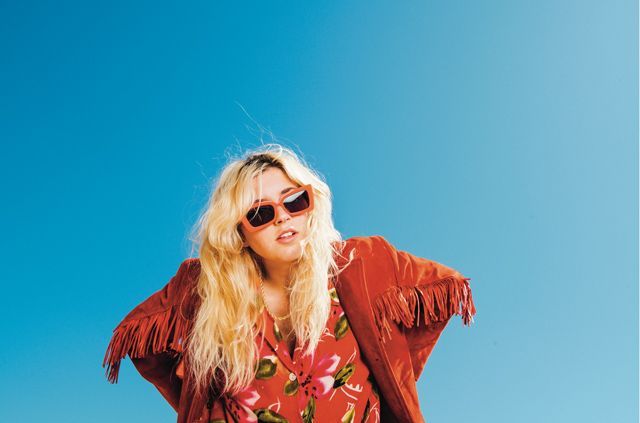 Caroline Rose created her fourth full-length, Superstar, amidst an aggressive tour schedule for her beloved 2018 release, LONER, recording from green rooms and her small home studio. She was inspired by cult films and the question, “Just how much can you make from nothing?” (Rose worked for years to promote Loner before it achieved critical acclaim.) The album is built in linear fashion, and it plays like a movie—weaving a partly satirical/partly personal tale of the climb to the top, and the lengths one might go to achieve success, while Rose’s infectious and hard-to-pin-down musical style courses through a kaleidoscope of sounds and genres.

From the album’s opener, “Nothing’s Impossible,” dance beats and synths crash in, followed by Rose’s velvet voice narrating an oddball anti-hero’s journey, beginning with a mysterious phone call from the Chateau Marmont (“Wow…nothing’s impossible/Even for you”). By the fifth track, “Feel the Way I Want,” our protagonist is fully in it, surrounded by glittering funk, reveling in themselves (“Ooh I got this feeling/Baby it’s just madness/I’m so in love with myself/It’s so romantic”). But before too long, we’re “Back At the Beginning” as the penultimate track takes a sobering look up from the bottom against a woozy, loping beat (“Is this what I wanted?/Is this what I wanted to be?”). Through the high highs and the low lows, Superstar is a bold and skillfully crafted body of work—a winking reflection on ambition, heartbreak, and regret—that speaks to Rose’s gift as an artist, while also speaking to our own secret desires.

Banny Grove's New Video Will Have You Feeling "So Happy So Good": BUST Premiere

"All Mirrors" By Angel Olsen Is Risky and Raw

Tags: Caroline Rose , indie pop , music review , album review
Support Feminist Media!
During these troubling political times, independent feminist media is more vital than ever. If our bold, uncensored reporting on women’s issues is important to you, please consider making a donation of $5, $25, $50, or whatever you can afford, to protect and sustain BUST.com.
Thanks so much—we can’t spell BUST without U.