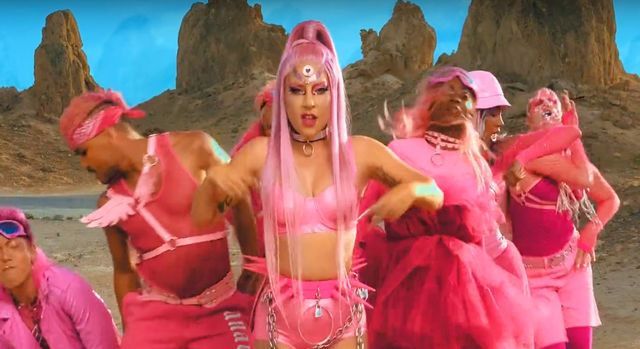 The Fame and the Fame Monster. Born This Way and Artpop. Cheek to Cheek and Joanne. Lady Gaga has successfully rebranded herself six times over the course of her 12-year music career (and that’s without counting The Haus and Star is Born eras!), and it’s looking like she’s just done it again.

Yesterday, Gaga released a brand new track and music video titled “Stupid Love,” the first single from what we can only imagine will be a new album and new iteration of the queen herself. After taking a break from creating electro-pop music for a few years, Gaga is back with a vengeance. Promotion for the single began earlier this week, and once Little Monsters saw bright colors and other-worldly aesthetics, they knew this was about to be good. Before jumping into the the intergalactic pop extravaganza that is “Stupid Love,” it’s important to know that the entire music video was shot on an iPhone 11. That’s right, this cinematic masterpiece was shot on a literal iPhone. (In the wise words of one Twitter user, get that Apple coin, sis!)

Get those Apple coins

Anyway, the video appears to be set on a desert-like planet in a galaxy far, far away. Clad in an all-pink fit, Gaga and her backup dancers somehow resemble both high-fashion Power Rangers and Mad Max-like rebels at the very same time. Many fans have begun to guess that the lyrics are referring to Gaga’s struggles with opening up to new love — more specifically, new love after a breakup with her fiance back in early 2019. With lyrics like “You’re the one that I’ve been waiting for / Gotta quit this crying, nobody’s gonna / Heal me if I don’t open the door” and “I don’t need a reason (Oh) / Not sorry, I want your stupid love,” it sounds like just another great song about love and relationships that anyone can relate to. The video, on the other hand, puts a different spin on things. But what Gaga vid doesn’t?

Gaga on the way to save pop music with LG6 pic.twitter.com/4LOq2tEn22

The beginning of the video explains that this distant planet is at conflict and war: “Many tribes battle for dominance. While the Spiritual ones pray and sleep for peace, the Kindness punks fight for Chromatica.” While we don’t really know what Chromatica is yet, per se (although many are wondering if that may be the title for this new album), it’s clear that this video is filled with metaphors about the current state of our world. With heavy nods to various cult classic flicks (Alien and Kill Bill come to mind), planet Gaga is home to a slew of different groups and communities.

While the majority of the video is just one fabulous dance routine after another featuring Gaga and the civilians of the planet, the video culminates in an epic fight scene between the groups that our pop queen has to break up (with the power of levitation, of course). As if there was no other way a Gaga video could end, the finale depicts one last dance party with all the aliens coming together as one. The last shot of the video shows Lady Gaga’s jacket with bright pink duct tape pasted to the back that reads “Kindness <3 Punk.”

Lady Gaga on her new album:

“I want people to dance and feel happy. I put all my heart, all my pain, all my messages from the other realm that I hear ... into music that I believe to be so fun and energetically really pure.” pic.twitter.com/sGVu8944Il

Following the release of the video, Gaga tweeted, “earth is cancelled.” It’s hard to tell whether she was referring to how dope Chromatica is and how we should all abandon ship and move there, or if she simply surveyed that state of our world right now and straight up cancelled it (which, out of everyone, she has the power to do). I do know that I have never retweeted anything faster in my entire life — and that Gaga has never been one to shy away from making a statement with her music. From “Paparazzi” critiquing the ways in which the media invades the lives of individuals to the overall messages of love and acceptance in “Born This Way,” “Stupid Love” is just the latest in a long line of Gaga songs and videos that can make us feel good and teach us something at the very same time.

Right now, we don’t know a lot about what the rest of Gaga’s new album will be like. Although one can only hope that perhaps this new era all revolves around the campy aesthetics of the planet Chromatica, LG6 remains a mystery.