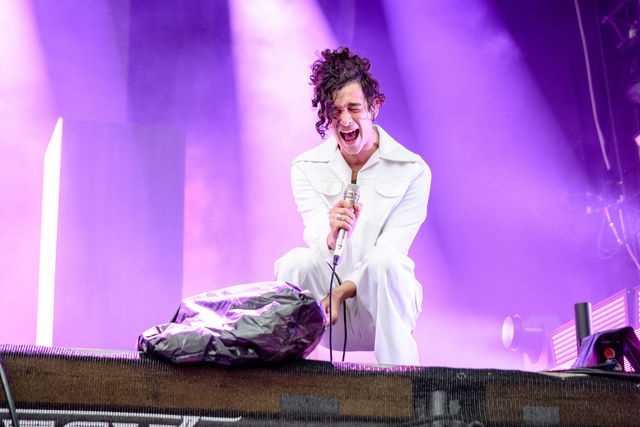 1975’s frontman, Matty Healy, has announced on Twitter that the band will only be playing festivals with a gender-balanced lineup. After another approaching festival season with largely male-based acts, The Guardian’s deputy music editor, Laura Snapes, reached out to the band online suggesting a new term of agreement for them “that says you’ll only play festivals that commit to X% (ideally 50%!) acts that include women and non binary performers.”

“Take this as me singing this contract,” Healy replied. The singer added that some festivals they had agreed to prior to making the promise might not “adhere” to the balance and canceling the already set shows would disappoint fans. “But from now I will,” he wrote, “and believe this is how male artist[s] can be true allies.”

Take this as me signing this contract - I have agreed to some festivals already that may not adhere to this and I would never let fans down who already have tickets. But from now I will and believe this is how male artist can be true allies ❤️ https://t.co/1eaZG2hEze

In 2015, music blog Crack In The Road started a conversation around the lack of female artists at festivals after they posted a photoshopped Reading and Leeds poster with all of the male acts removed, something that has been done yearly since to depict the disparity among spots held by women and men. The female-only updated lists leave many sad, empty spaces with a scattering of names. And it isn’t just the predominantly indie-rock festival either,many of the other top events throughout the summer have a similar issue. In fact, according to Keychange, in 2017 only 26% of the lineup in big-name music festivals were women; for the US, it was 10%.

Keychange is an international campaign aiming to bring more diversity to the music industry by investing in burgeoning talent and pushing for their partners of “all music organisations” including festivals, orchestras and record labels to meet a 50/50 gender balance goal by 2022. Many events and companies have signed up to the initiative including Standon Calling, Liverpool Sound City, Royal Opera House, Southbank Centre and more. Still, none of the biggest names in music festivals such as Glastonbury, which will have its first female headliner this year (Taylor Swift) since Adele in 2016, have signed on.

There have been slight advancements, however. Although Trump, Brexit, and Coronavirus will surely be remembered as some of the most historic moments of this era, Beychella will rightfully be noted as another- when Beyonce headlined the 2018 Coachella music festival and was the first black woman to do so. Similarly, Lizzo will become the first woman to headline the Bonnaroo festival this year; and last year at Barcelona’s Primavera festival, where Rosalía performed, there was a 50/50 gender lineup which will be repeated again this year. “Music shouldn’t be the ‘pale, male and stale’ playground any more,” organizer of the event, Marta Pallarès, wrote in Loud and Quiet.

With the 1975’s platform, they hope to encourage other male musicians and people in the industry to engage in similar stances. Healy, who is an advocate for climate change, included a speech by Greta Thunberg on a track released last year. In addition to their vocal demand for an effort in environmentalism, the band holds a yearly festival in Finsbury Park and has pledged to plant a tree for every ticket sold. More than half of the performers, like Charli XCX and Phoebe Bridgers, are female.