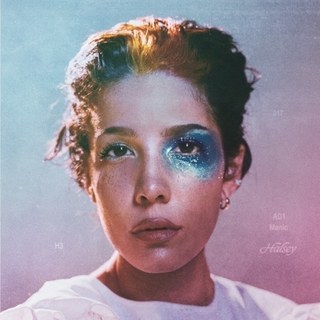 Halsey’s third studio album, Manic, is quintessentially an album about being in your twenties, about the muddle of being at what feels like the height of one’s youth and desirability while simultaneously being as uncertain and sensitive as you’ll likely ever be. In your twenties, you’re legally an adult, yes, but you still seemingly lack the power, privileges, and security of full adulthood in many ways. Taken as an artistic statement, Manicperfectly conveys the inherent tensions and pitfalls of seeking out and forming connections when you’re a young adult, of both wanting and fearing something real, desperately, with all your heart. Halsey’s lyrics mine the contradictory impulses of wanting either to close yourself off from others and protect the most vulnerable parts of yourself, or, alternately, to open yourself up to love and risk betrayal and heartbreak.

The musically adventurous, voracious, omnivorous Manic represents a total turnaround from the relative disappointment that was Halsey’s previous effort, hopeless fountain kingdom, which was itself a step backwards from her impressive debut, Badlands. On Badlands, Halsey combined an uncanny ear for pop melody with strikingly honest, detailed confessional lyrics about love, yes, but also sex, desire, drugs, and mental illness in a way that felt fresh and unmatched (and that spawned roughly a trillion Tumblr aesthetic boards), especially with songs like “Colors,” “Strange Love,” “Coming Down,” “Control,” and “Roman Holiday.” On Badlands, Halsey introduced herself to the world as a new artist unafraid to be unsubtle: she was willing to risk being overwrought or lyrically clumsy in her need to get her point across. The important thing, it seemed, was for her to get it all off her chest and into the world.

But with hopeless fountain kingdom, Halsey retreated musically as well as lyrically. By sticking to a prescribed storyline inspired by Romeo and Juliet, hopeless fountain kingdom abstracted and made generic the confessional, detailed lyrics of Badlands while also staying bogged down by a desire to seemingly keep every song radio-friendly, at the cost of freshness and musical ingenuity (see the entirely generic “Now or Never,” which I hope never to hear again on the radio). There were a few bright spots, such as “Strangers,” a duet with Lauren Jauregui that explored an on-and-off again relationship with another woman, “Sorry,” a tender piano ballad, and the Badlands-esque “100 Letters,” but overall, it didn’t match up. (While technically both Badlandsand hopeless fountain kingdom are concept albums, Badlands is a strong enough collection of individual songs that the vagueness of the concept doesn’t hinder its success as a project.)

On Manic, however, you don’t need a story to follow along, because Halsey’s own emotional journey resonates so deeply. Halsey rebounds, stronger and more confident than ever, and wisely solves the problems of hopeless fountain kingdom by nailing, pitch-perfectly, the messiness of her own emotional openness and volatility while letting her musical influences run wild. Indeed, Manic takes us on a musical journey as varied and sweeping as Halsey’s capacity for love, lust, and loneliness—and pretty much every song is stellar.

The tracks on Manic run the gamut from club jams to various flavors of pop (synth, electro, alt-, baroque, et cetera) to hip-hop to even country and alt-rock, and Halsey’s flexible voice is more than up to the challenge. Most ingeniously, Manic acknowledges the audience’s expectations of each musical genre, ultimately matching every kind of lyrical theme with an appropriate musical style for maximum impact. See, for instance, the acoustic, catchy, country stylings of “You should be sad,” where Halsey nearly spits out, “You’re not half the man you think that you are / And you can’t fill the hole inside of you with money, drugs, and cars / I’m so glad I never ever had a baby with you,” pairing a near-twang in her voice with a Dixie Chicks-style telling-off of a bad, no-good man. Or take the adult-contemporary vibe of the chorus of “Finally // beautiful stranger,” where Halsey wonders whether the “beautiful stranger” in her arms will “do [her] wrong,” or whether it’s “safe […] to fall.”

“I HATE EVERYBODY,” one of the best songs on the album, finds Halsey simultaneously bemoaning her inability to be satisfied alone and a general misanthropy derived from self-loathing against dramatic Panic! At the Disco-esque synths, trills, and bells. “clementine” explores this same territory, with the haunting chorus of “Cause I don’t need anyone / I don’t need anyone / I just need everyone and then some.” Even the more high-concept touches, like the several interludes guest-starring other musicians, and the use of audio clips from movies to emphasize the themes of the songs, are judiciously chosen and even add excitement rather than sounding skippable or eyeroll-worthy. The stretch of songs on Manic that includes “Forever … (is a long time),” “Dominic’s Interlude” (featuring singer Dominic Fike), and “I HATE EVERYBODY” flows together perfectly and seamlessly, coming across almost as one long song. The rock-sounding “3am” caps the trio off perfectly with the classic Halsey lyric “I need it digital ’cause, baby, when it’s physical I end up alone”: slightly clunky, but honest and effective, and very reflective of contemporary approaches to relationships and isolation. Alanis Morrisette makes an appearance on her own interlude, alternating and duetting with lyrics about loving men and women both: “’Cause he is she is her / And her and he are love / And I have never felt the difference.” K-pop Star Suga (from BTS, with whom Halsey collaborated in 2019) has his own interlude as well, incorporating yet another exploration of genre into Manic.

Snippets of films as varied as Eternal Sunshine of the Spotless Mind and Jennifer’s Body appear in the tracks “Ashley” and “killing boys,” respectively. Halsey uses Kate Winslet’s famous rejection of a role we might now refer to as a Manic Pixie Dream Girl, perhaps to comment on her previous relationships with men as well as the public persona some observers have assigned her. The single “Without Me,” while perhaps the weakest song on Manic, digs into this same dynamic, reinforcing her desire to be a  Clementine and not a Kirsten Dunst in Elizabethtown or Natalie Portman in Garden State, recounting being used by a lover for support and fame but without receiving anything in return. Megan Fox’s and Amanda Seyfried’s famous conversation about the dubious merits of murder in Jennifer’s Body kicks off “killing boys,” which is an incredibly catchy, sly tale of getting payback on a boyfriend that balances insouciance and melancholy.

And even with this enormous variety, Manic feels unified and consistent, rather than scattered, precisely because of Halsey’s lyricism and emotional expression throughout. Her words are evocative enough that you don’t even need to be familiar with which ex-lover Halsey is singing a particular song about, although that information is certainly available online (or is expressed clearly enough for devoted fans to decipher, Taylor Swift-style). There’s tenderness and raw pain in “More,” where Halsey alludes to experiencing several miscarriages; there’s a strong metaphor in “Forever … (is a long time)” for the fruitless effort in trying to make something work: “I spent a long time watering a plant made out of plastic / And I cursed the ground for growing green.”

But even beyond that, Manic takes us through a very clear progression of Halsey’s mental and emotional state, as if she begins with the anguish of “Ashley” and “clementine” and comes to a more accepting place in “Still Learning” and album closer “929.” The final track is a stream-of-consciousness venting of tiny, discrete memories that linger in Halsey’s mind, as if she’s using the last track of her own album to make sure she hasn’t left anything unsaid. And while Halsey certainly hasn’t spared any detail in Manic, she’s made it clear that she still has plenty left for listeners to anticipate on future musical endeavors. “929,” titled after Halsey’s own birthday (she just turned 25), makes it clear that she’s very aware of her twenties as a time of both invincibility and vulnerability, and that if she can make it this far, getting through the hurt and troubles to thrive, maybe there’s hope for all of us.

Manic is out now.