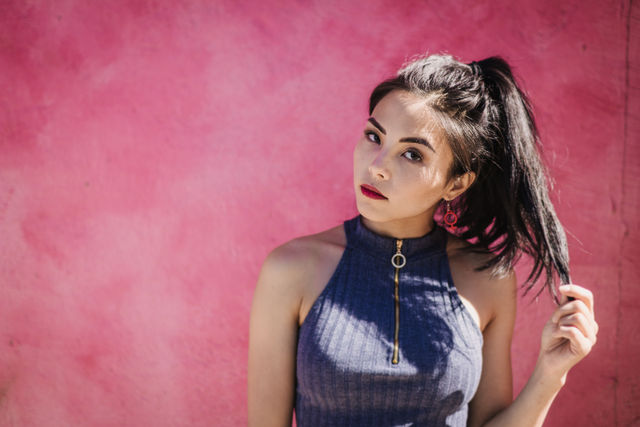 On her 2019 debut, Casualty, Anna Akana refuses to stick to one emotion: from the feisty “Intervention” to “Alone Together,” an ode to a complicated breakup, her songs are anything but ambivalent. The most heartbreaking track on the record, though, is the vulnerable “Selfish.”

“I have been pretty vocal about the fact that I wrote the album during a dark period in my life, and I really wanted to address that depression head-on,” Akana tells BUST. About the lyrics, she adds, “Sometimes, you’re in a position where you want to take that opportunity of an out. I know I never could, because I’ve seen the effects—how that’s impacted my family and my brother and my parents—but sometimes, life is exhausting. Being a person is exhausting.”

In 2007, Akana lost her sister to suicide. As an actor, author, content creator, and musician, Akana has used her myriad platforms to raise awareness about mental illness. Her powerful video “please don’t kill yourself” has amassed upwards of 3 million views on YouTube, and her memoir, So Much I Want To Tell You: Letters to My Little Sister, offers advice on just about everything. But through music, Akana says, she’s able to talk about mental health in a different way.

“[Through other mediums,] it’s definitely a more uplifting, educational message, whereas in music, I was able to just sit in whatever feeling, work off of that,” she says. “Especially when I’m in the throes of my clinical depression, it’s sometimes great to just have a song that lets you feel bad, that just validates your sadness.”

Akana’s videos are just as varied as her songs, and for the “Selfish” music video, she teamed up with animator Jennifer Ruiz. “When you are really depressed, time just slows down—and there is no art form that takes longer than stop-motion,” she quips. Watch the video below:

Up next, you can catch Akana in ABC’s A Million Little Things, returning January 23, and Netflix superhero drama Jupiter’s Legacy, which will premiere at the end of this year.

If you or someone you know are thinking about suicide, please call the free, confidential National Suicide Prevention Lifeline at 1-800-273-8255. You can also reach the Crisis Text Line by texting “START” to 741-741.

Tags: Anna Akana , video premiere , mental health , suicide , music
Support Feminist Media!
During these troubling political times, independent feminist media is more vital than ever. If our bold, uncensored reporting on women’s issues is important to you, please consider making a donation of $5, $25, $50, or whatever you can afford, to protect and sustain BUST.com.
Thanks so much—we can’t spell BUST without U.