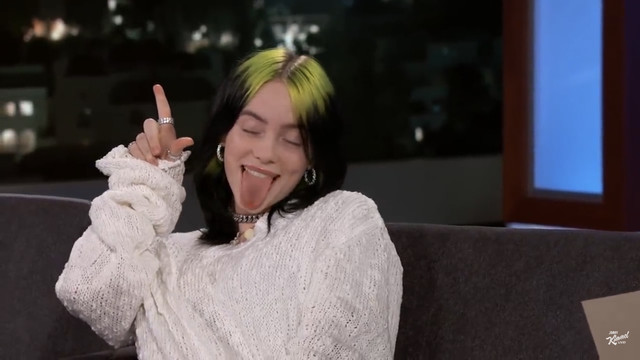 On an episode of his talk show two weeks ago, Jimmy Kimmel quizzed the teenage emo-pop sensation Billie Eilish on her familiarity of all the artists he listened to when he was her age in 1984 (a clue of foreshadowing for those who are familiar with this certain band’s discography). When he began to ask “Can you name a Van Halen-” the seventeen year old expectedly replied, “Who?” to which Kimmel joked he was going to start crying.

To be fair, I am a member of the Gen-Z community who is very familiar with Van Halen’s music, embarrassingly. But it’s not fair to expect any person born after 1995 to be well-versed in hair metal band music of the 80s. Meanwhile, if I asked any random man over the age of 40 who Billie Eilish was, they’d probably be perplexed, too. So to put our dear boomer dads out there to the test, here’s a list of 10 female artists you should quiz your elder on:

The British pop princess got her start by posting her songs on Myspace at the tender age of 14. A club promoter found her music online and invited the then teenage Charli to perform at a rave party. She took the opportunity and-- her parents chaperoned. Now, eleven years later, Charli XCX is a full-fledged electronic music icon. Her unique metallic-yet-girly edge has gone mainstream, and her discography is full of party anthems that are sure to make you dance.

Most people assume the hardest mosh pits collide in crowds of white dudes at hard rock concerts, but I’m here to tell you you’re wrong. Black girls can mosh too, and we go pretty hard. The hardest mosh pit I’ve ever been involved in was the all female one Rico Nasty administered at her Afropunk set this past summer in Brooklyn. Imagine hundreds of young black girls all throwing their bodies against each other to the lyrics, “Thank God I ain’t have to smack a bitch today.” There was one older white man at the front of the stage who shocked us with his presence. We bonded with him and he told us he was a professor of African American Studies at Yale University. His much younger girlfriend introduced him to Rico's music. Needless to say, it was a physically painful yet moving experience. The DMV rapper fuses her punky rock attitude with catchy rhythmic hip-hop beats. She’s been featured in Vogue, has landed her own magazine covers, and has amassed millions of listeners and followers. She’s certainly an artist on the rise.

A true genre-defying artist, Kali Uchis makes music for the girls who can’t be put in one box. Like Rico Nasty, she reigns from the DMV where she was also influenced by punk music just as much as she was inspired by her own culture as a Colombian-American woman. Her music blends the smooth Latin rhythm with her own R&B twist. After two critically acclaimed studio albums and millions of streams, she is still on her grind working on new music. Her new single “Solita” just dropped today, so do your favorite boomer a favor and send him the link.

Mitski’s most recent album Be The Cowboy is what your angsty indie daughter was probably listening to after the boy she had a crush on lead her on and left her feeling lonely. With lyrics like, “I’ve been big and small, and big and small… and still nobody wants me,” the 29 year older has a powerful way of memorializing the young adult experience that not many other artists have been able to execute with the same conviction and tenderness as she has. Her words can creep under your skin and into your soul right where they belong. She has been called “the most advanced American songwriter,” by rock legend Iggy Pop. There’s an endorsement that even the most out of touch boomer can respect!

You may recognize this L.A. rapper and songstress from the viral video and meme “Bitch, I’m a cow,” which has accrued nearly sixty million views on youtube. The video shows Doja Cat dancing in her cow patterned thotfit in front of a green screen eating various beef and dairy products and sticking french fries up her nose to the beat of her musical ode to the farm animal. Though she’s got a great sense of style and humor, her rapping abilities are no joke. Doja Cat’s second full-length studio album Hot Pink was recently released this past November. She two hit songs on the charts, one dedicated to butts (“Juicy” featuring Tyga) and the other dedicated to boobs (“Tia Tamera”). We can’t get enough of her anthems to body positivity. Keep ‘em coming, Doja!

Michelle Zauner, the frontwoman of the band Japanese Breakfast, was only 15 years old when she got her hands on her first guitar. A year later, she began making music of her own. Her band has toured across the country and around the world, playing celestial melodies from their two studio album Psychopomp and Soft Sounds from Another Planet. The musician uses her songwriting as a way to work through ideas of identity, loss, and love all to a soft, upbeat soundtrack.

Trying to explain Lana del Rey’s music to my own father has been a waste of time, so if you recognize her music, you get extra cool points. Many of us Tumblr alums remember the days when Lana del Rey’s impact radiated through adolescent girl fandom blogs and twitter accounts across the internet. Yet, when I ask most older people about their familiarity with her, they look at me with blank faces. Her sound is reminiscent of Nancy Sinatra, but her lyrics read like an Eve Babitz novel. If you’ve caught your daughter sporting a flower crown on her way to a music festival, you can almost certainly blame her for the return of the 60s trend. Her sixth album Norman F***ing Rockwell was released this past summer in August to critical acclaim. I personally think it is one of her best albums to date. I recommend you take a listen.

Megan Thee Stallion, also known as the founder of this past Hot Girl Summer, is a rapper and songwriter hailing from Houston, Texas. No, the “Thee” in Megan Thee Stallion’s name is not a misspelling. When you have a flow as hard as hers, you need the extra -e for emphasis. What is a stallion, your dad might ask? She’s not referring to the four legged kind you might be imagining. In the south, a stallion is a word used to refer to women who are tall and curvaceous, much like the majestic animal. Megan proudly identifies herself as a stallion, and many women around the country has resonated with the sex-positive attitude in her lyrics. The superstar has just made Forbes 30 Under 30 list at just 24 years old-- and all while pursuing her degree at a four year university. She’s the modern day role model we should all look up to.

The German born popstar has been destined for stardom ever since she came to America to begin her music career at the young age of 19. Petras became famous in Germany for being the country’s youngest person to undergo gender affirmation surgery when she was 16. She had already begun making music by that time, but was never taken seriously as an artist by those in the German music industry. Now, she has proven all her haters wrong. The singer is beloved by her fans, especially on twitter. Her music is saturated bubblegum pop, but the production sounds more mature than the early 2000s pop idols she pays homage to. It’s impossible to stand still when you listen to Kim. Even the stiffest dads won’t be able to resist the beat.

FKA twigs is not just your daughter’s teenage vampire crush’s ex-girlfriend-- that’s what the tabloids would like you to think. She is a true artist in every sense of the word. FKA twigs is a classically trained opera singer, ballerina, hip-hop dancer, songwriter, choreographer, and director. It’s difficult to explain what genre her music falls under. It’s extremely original, to the point that when I show my older family members her music, they become agitated at the sounds they’re hearing. “I don’t understand it,” is what my mom told me after having her listen to LP1, her first full length studio album. The range of her influences include: Siouxsie and the Banshees, Adam Ant, Billie Holiday, Björk, Kate Bush, Sonic Youth, Erykah Badu, and many many more. Her newest album MAGDALENE is like a classical electronic baroque trap album, if such a thing can exist. To prepare herself for her album’s tour, she spent months learning pole dance and traditional wushu after recovering from surgery. I saw the MAGDALENE performance twice over the course of the summer, and it was a truly breathtaking show. Whether you get the music or not, her talent and discipline as a performer is undeniable. The only way to understand her genius is to just sit and listen to her music and watch her videos without any pretenses. Just marvel. If your dad vibes with FKA twigs, he is automatically elevated from boomer status to a respectable “cool dad” level.