This Fall, Bikini Kill Reunited For A Night Of Feminist Herstory 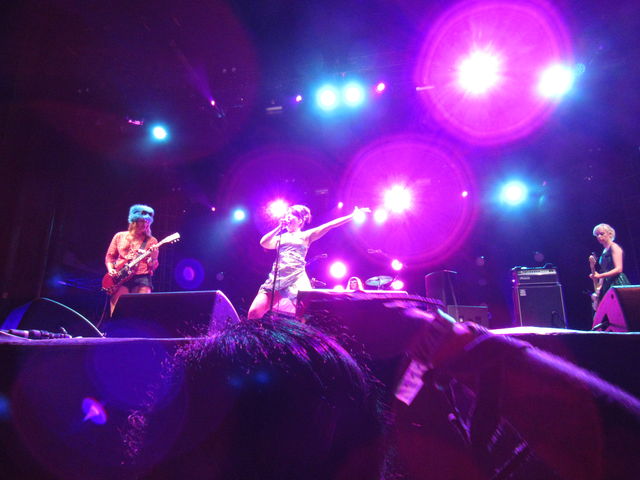 Walking around the grassy concert grounds of Riot Fest, it is evident punk music has evolved to become more inclusive: the festival attendees are people from all walks of life. Everyone is here to have a good time, and with a wide variety of music, there seems to be something for all of us.

As attendee Fat Tony put it, "I think nowadays it's way more punk to be accepting, and it's way more punk to use the right pronouns not to misgender people. Being misogynistic was cool at one point, but it's not anymore. For example, [the band] Against Me! is a massive advocate of trans people."

Many incredible artists have paved the way for acceptance and gender inclusivity in punk music. Bands like Blondie, Joan Jett, and The Runaways (of which Jett was one of the founding members) left their mark on rock ‘n’ roll; as rock evolved into punk and grunge, though, it started becoming a sort of boys’ club.

Female punkers were treated as poseurs or groupies. In 1990, a small group of women from Washington state started the Riot Grrrl movement. These women formed bands and created fanzines explaining the feminist manifesto. Some scholars argue this movement was the kick-off to the third wave of feminism.

During that time, Kathleen Hanna, who was living in Washington and studying art, was a part of the Riot Grrrl movement. She got together with fellow zine creator Tobi Vail, Erica Dawn Lyle, Billy Karen, and Kathi Wilcox to create the all-female (and now iconic) punk band Bikini Kill.

At the time, this punk group was the epitome of feminism, and exemplified the ways in which art and activism can relate to each other: they were going to take down the patriarchy, and they were going to use music to do it. These women were, and still are, a force. After playing and writing their zines in 1991, the Riot GRRRL manifestowas written.

The band continued to trailblaze until 1997. It was then that the group disbanded but, in the magical year of 2019, Bikini Kill reunited for the first time in 22 years to tour.

Attendees of Riot Fest witnessed living feminist herstory on September 15, when Bikini Kill headlined and closed out the festival. As many attendees agreed, the band deserved to be the headliner.

"I relate to them so much – they make me feel, it sounds so cliché, but not alone," attendee Shelby Grassman said. "Their existence is super important for women, especially women that enjoy rock music or any alternative music that's been dominated by men."

Attendee Robyn Reynolds added, "They're the whole reason we came out today. I think they have given a voice to women in punk music and allow them the freedom and comfortability to be in this space and not be intimidated."

As Bikini Kill walked on stage to perform, it was evident why they have left such an incredible mark on music. The energy was electric, and the empowerment was palpable. This was the year Riot Fest decided it was going to be feminist as fuck, and unabashedly.

With Hanna on vocals, Karren on guitar, Dawn Lyle on Guitar, Wilcox on bass, and Vail on drums, the church of feminism was in session.

As the crowd started to jump and chant, Hanna took a moment after a song to say, "I'd chant with you, but I'm afraid of what would happen." After this, she took a moment to call out the dudes who were in the front, taking up more space than necessary.

"If you're a cis, white, gendered man here and you could realize how much space you're taking up here, that'd be great," Hanna said directly to the tall men pushing women aside. It was evident from this show that feminism in punk music and music, in general, continues to be necessary.

Hanna and the members on stage addressed how hard it is to be a feminist, and how quick others are to dissect what it means.

Before singing their song, "Shut Up," Hanna took another moment to address the audience, saying, "This is a song for mansplainers who tell women how to be feminist, when a guy ends up reading more books about feminism than you and ends up being a fucking rapist. You're a fucking dick."

As the night proceeded, Hanna spoke on other issues about feminism. She wasn't preachy but instead spoke like an old friend, letting the audience know that it's okay if we mess up. It's okay if we need to take time for ourselves. Equality is an exhausting uphill battle. "No conversation, no band, no art starts everything being perfect, it's the mistakes that make it better," Hanna said from the stage. Her words, coupled with the band's music, made it feel like a moment of catharsis.

This show was a victory for people who are marginalized because of their gender identity. It was one of the few times an establishment took the time to see us. To put on stage a group of forwarding-thinking women who want a "fucking revolution and to change the world."

We witnessed herstory and were given the baton to continue the fight. And maybe, someday, a future feminist frontwoman for a punk band will get onstage at Riot Fest, push the cis white men to the back, and thank Bikini Kill for starting a movement.

The Regrettes: The Modern-Day Riot Grrrl Group In Concert

Tags: Bikini Kill , concert review , Riot Fest , riot grrl , riot grrrl , punk , feminism
Support Feminist Media!
During these troubling political times, independent feminist media is more vital than ever. If our bold, uncensored reporting on women’s issues is important to you, please consider making a donation of $5, $25, $50, or whatever you can afford, to protect and sustain BUST.com.
Thanks so much—we can’t spell BUST without U.