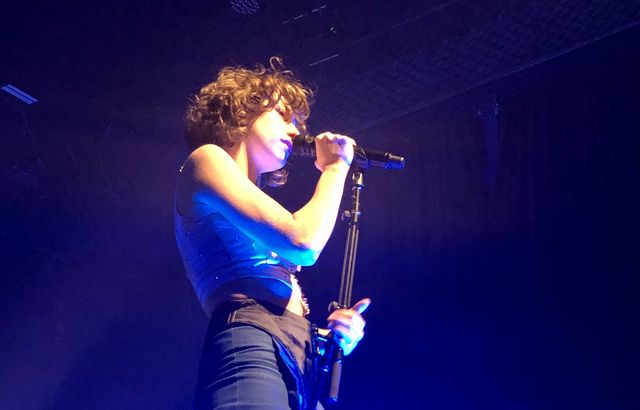 At one point during her November 1 show at New York’s Terminal 5, 20-year-old Mikaela Straus—better known as King Princess—looked out at the crowd and announced, “I’m gay.” Once the cheers died down just a bit, the pop up-and-comer performed “1950,” her first single from 2018. “I hate it when dudes try to chase me,” Straus sang. “But I love it when you try to save me.” Of course, her fans knew all the words.

I first fell for King Princess with the June 2018 release of her debut five-song EP, Make My Bed. On my favorite track, “Talia,” Straus unsuccessfully and repeatedly attempts to bury the memory of a girl who broke her heart; then, on “Upper West Side,” she rolls her eyes at someone she reluctantly can’t stop thinking about. Her songs are as vulnerable as they are snarky, and her voice is silk-smooth and seductive.

King Princess just dropped her first full-length album on October 25. Cheap Queen features songs just as timeless, sultry, and honest as the ones on Make My Bed—as Straus previously told Them, “I’m not somebody with chill, so my writing has no chill, either.” On this new album, Straus explores practically every step of falling in love or lust (“Homegirl”), breaking up (“Watching My Phone”), and all the messy in-betweens (“Ain’t Together”). To support the release, she played two sold-out hometown shows in New York.

Straus kicked off her set with the emotional ballad “Isabel’s Moment” before segueing into “Tough On Myself,” the album’s opener. She is an unquestionably natural performer—Straus owned her stage with such painless confidence that even the saddest, most exposed songs off Cheap Queen sounded new. On her record, the unapologetically devastated “You Destroyed My Heart” is the perfect background music for a moment of bitterness and loss, but live, the song turned harder, angrier as Straus sang, “You broke my heart/Now I want somebody good.” Other standouts included her concluding performance of “Hit the Back” and her encore, “Ohio,” a track that, reportedly, almost made it onto Cheap Queen.

What was almost as amazing as Straus’ performance, though, was the community she created in three hours. At the end of the show, I noticed two girls, both a bit younger than me and giddy from a post-concert high, struggling to take a selfie. When I offered to take a photo for them, they assumed the position: one wrapped her arm around the other’s waist and kissed her cheek. I jokingly texted my friend—ugh, the KP concert made me want a girlfriend—but more than that, it made me think of my younger self circa 2010, dressed up in neon Spandex for Justin Bieber’s My World tour, laser-focused on each of Bieber’s movements, bathing in the warmth that comes from dancing with so many girls who had waited months and months and months for one specific moment.

I’ll never know what it would have been like, as a teen girl, to have had a heartthrob like King Princess to look up to and to crush on, someone who writes sexy, emotional songs about desiring other women, fucking other women, and—well—sometimes losing other women, too. At her show, I was surrounded by queer teens and adults alike who saw the same thing I did: a pop star who cared about making music for us. Someone who chose to open her sold-out shows with performances by local drag queens; someone who smirked when audience members threw bras onstage.

But maybe it feels like the kind of love Straus describes in “1950”: “Tell me why my gods look like you,” she sings.

Every time, her fans sing along.