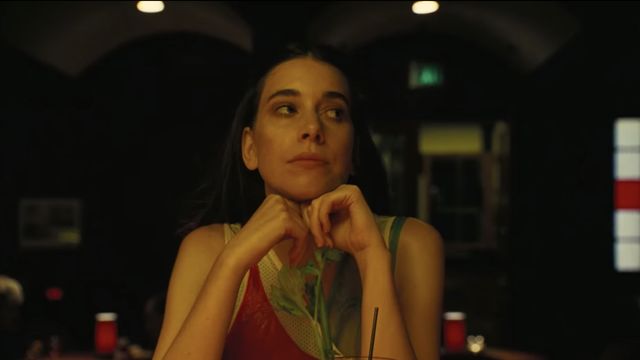 Don’t worry, everybody. Things are going to be okay. HAIM released a new song and a music video, directed by honorary fourth HAIM sister Paul Thomas Anderson, on October 30. The world has been good to us for another three minutes and 24 seconds.

If you’re a true HAIM fan, like me, you paused your entire day to watch the premiere of the “Now I’m In It” music video at 3:30 pm EST on YouTube—and then you watched it seven more times. Not only does the song bring to mind the likes of Queen or St. Vincent ("Under Pressure"? "Fast Slow Disco"? No? Just me?), but it also has that HAIM sound that we all crave: the drums that are impossible to not dance to, the harmonies in the backup singing, and—in the music video—Danielle Haim going through a car wash and the strutting through Los Angeles in a way that feels brand new every time. Nothing about the song isn't perfect, but let's talk about the lyrics.

“Now I’m In It” is about depression and understanding how it feels to go through a period of hopelessness — when you feel like you’re stuck in a dark hole, Danielle Haim wrote on their joint Instagram account. Danielle continued to say that “the track is chaotic- like my mind when I’m spiraling. Fast-talking to myself- words jumbled up.” The song is about accepting the need for help when you’re depressed and working to get through a tough time.

This song comes after their other recently released track “Summer Girl.” According to DAZED, “Summer Girl” was written by Danielle after she found out her partner was diagnosed with cancer. Both songs feature incredibly moving lyrics that can make you cry tears of sadness and also joy while you’re dancing your heart out. These are the kinds of songs you would request at a house party, even though they aren’t the lyrics you’d expect everyone to be singing as they lose another game of beer pong. But who cares? With those songs blasting at the aux, you’re winning all night.

HAIM has been around since 2007 and recently got their first headlining gig at Pitchfork Music Festival in Chicago, which brought in a crowd that sang every one of their songs louder than ever. Since they first entered the scene, HAIM has released an EP (Forever) and two albums (Days Are Gone, Something to Tell You), with the first one earning a Grammy nomination for Best New Artist, and a few singles and remixes. They’ve been the musical guest on well-known talk and sketch shows like The Tonight Show with Jimmy Fallon, Ellen, Graham Norton, and Saturday Night Live. And not only do they reject the term “girl band” and promote themselves as individual musicians, but they also show off their feminist qualities—like firing their booking agent after finding out they were paid 10 times less than other male artists represented by the same agent—and don’t back down when they feel the women in the music industry aren’t being treated equally. In other words, they are feminist queens.

Though it was only dropped about 24 hours ago, the music video for “Now I’m In It” has been viewed over 230,000 times, a number that's sure to be doubled by this time tomorrow. There has been no talk of a new album just yet, but they are releasing music as they finish it. If anyone happens to have their number, I would be more than happy to personally call them and ask about an album—and also ask them if they want to hang out or something.

header photo courtesy of "Now I'm In It" Music Video/YouTube

Tags: HAIM , music , music video , depression
Support Feminist Media!
During these troubling political times, independent feminist media is more vital than ever. If our bold, uncensored reporting on women’s issues is important to you, please consider making a donation of $5, $25, $50, or whatever you can afford, to protect and sustain BUST.com.
Thanks so much—we can’t spell BUST without U.