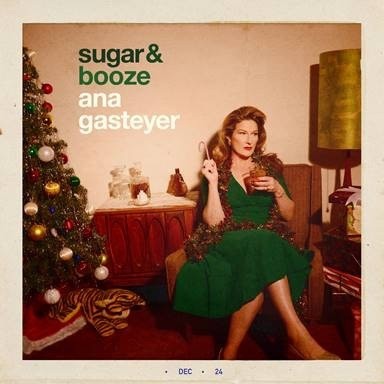 The brilliant comedienne and singing dynamo Ana Gasteyer is back with an intoxicating new album just in time for the holiday season. Sugar and Booze is her new collection of original PG-13 Christmas anthems that’ll get you in the naughty mood. Warning: if you were looking for some songs your little drummer boys and girls could sing along to, you might want to reserve this for the adult holiday party...

One track off the album is entitled “Secret Santa.” It has an upbeat tropical swing reminiscent of a '50s bossa nova club song with Gasteyer’s unique twist of humor. It feels like it was written by the magical love child of Astrud Gilberto and Lucille Ball — an unexpectedly perfect combination. The song also features a mini SNL reunion with the dazzling Maya Rudolph, and the two discuss Gasteyer’s predicament and subsequent revelation over the telephone. It seems Ana has flown to Havana, Cuba to buy the perfect gift for her dashing yet terribly chauvinistic guy, but after an unfortunate banana slipping accident, she’s awoken from her concussion on a cabana with a delicious cocktail of orange Fanta and rum and literally got woke to her man’s sexism. She’s through being quiet for her man. She’s too busy enjoying the warm tropical breeze and her own feminine mystique. Gasteyer and Rudolph exclaim in a duet that they’re, “brassy and sassy and proud!” Who knew the spirit of Christmas could be so empowering?

Sugar and Booze will be released on October 25 (a hint for anyone wondering what the perfect gift is this year). If you happen to be in New York, Los Angeles, Philly, Atlanta, Nashville, Evanston, or Ridgefield: you’re in luck! Gasteyer and her band will be touring this album in your cities from November 30 to December 20. Treat yourselves to the most wonderful show of the season. Tickets are on sale now.

Comedian June Diane Raphael On Why She'd Rather Be Called A 'Bitch' Than 'Nice': BUST Interview