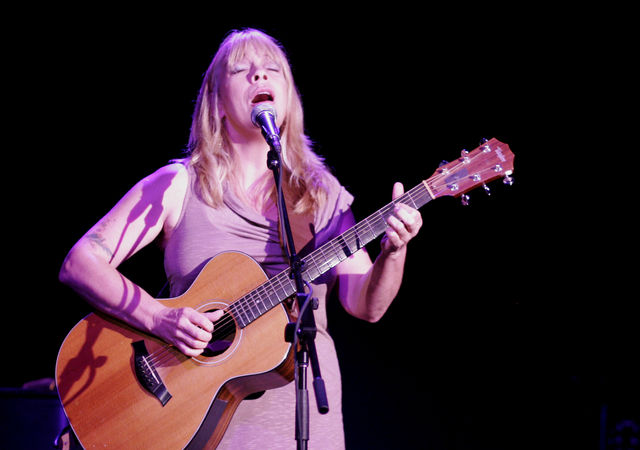 Few women have arrived on the music scene with the critical and commercial force of Rickie Lee Jones. Her self-titled debut featured 11 songs that ranged from the catchy, lighthearted “Chuck E’s in Love” (a Top 5 hit) to heartbreaking ballads like “Last Chance Texaco” and “Company.” That album made her an overnight success: she graced the cover of Rolling Stone, won the Grammy for Best New Artist of 1979 and became the first musical guest on Saturday Night Live to be allowed three songs instead of the customary two.

But Jones defied expectations right off the bat. Her sophomore set, Pirates, was another critical success but bore little resemblance to her debut. It contained just eight songs but most of them were longer, more detailed lyrically and less traditional structurally. It was the first of many left turns she would take. Jones has released 12 more studio albums since then, each one different from the next. While she has never scaled the commercial heights she did initially, her place in the popular music pantheon is beyond dispute and her influence on other artists has been significant.

2019 is a big year for Jones. For one thing, it marks 40 years since she unveiled that first album. And for another, she has a new studio effort, called Kicks, which came out in June. This is a collection of covers (her fourth) and it’s also the second album she has released since leaving Los Angeles — which she called home for many years — and moving to New Orleans. If there’s another disc in her catalog that Kicks resembles — in terms of both brevity and diversity — it’s probably 2000’s It’s Like This. The artists that Jones covers this time around range from Elton John to Bad Company to Dean Martin. She also tackles “Nagasaki,” which was written in 1928 but popularized in the ‘50s by The Benny Goodman Quartet.

I’ve had the pleasure of speaking with Jones several times over the years. This time around, in addition to covering Kicks, we discussed everything from her thoughts on the women who have influenced her to her landmark debut.

I wanna start with Kicks, the new album. This is the second album you’ve made since moving to New Orleans. Tell me a little bit about your connection to the city.

I lived here back in the early ‘80s. Had an apartment for a few years that I came to off and on. And I would say specifically, it inspired the character record Pirates. A song like “Woody and Dutch”… [It was] a departure from the first record. I came here to play only a couple of times. But when I came back here, just before Katrina, it was looking pretty nice… Anyway, I started getting it in my mind that I didn’t wanna live in L.A. anymore. And New Orleans felt familiar. So my relationship with it is kinda personal.

A couple of the songs on Kicks were popularized by Dean Martin back in the day. Were you a fan of Dean’s growing up?

Yes, I am a fan of Dean’s — but not enough to make that the reason I did it. But as I discovered one song, I discovered [others]. The songs that he recorded in the ‘60s I really have an affinity for. They’re light, funny, smart. I first think of the songwriter, and then his performance. So I associate it with Dean Martin but [those songs were] written by different people. One of them was Lee Hazelwood, who was writing for Frank Sinatra. He was an important writer in [terms of] the music that was on the radio before the psychedelic movement.

This album opens with “Bad Company.” What drew you to [cover] that song and put it first on the album?

Well, there was a lot of thought about the sequencing. In some place, “Bad Company” just kills the record; in some other place, some other song dies. So this was the best place for [it]. And other people thought it should be first. They just felt it would be a strong way to come out.

I like rock and roll. I love a nasty guitar. I love that music, even though the timbre of my voice doesn’t necessarily lend itself to it. [But with] this one, I was able to tell that story. You know, I sing a lot of rock and roll at soundcheck or sitting at home by myself.

I remember you telling me [once] that you were also a big Janis Joplin fan but that your voice couldn’t have been more different from hers.

That’s right. The idea, if I wanted to do a Joplin song, would be to emphasize the difference. A good artist will take somebody else’s influence and make it their own. I’m always excited to declare women that inspired and influenced me; I feel it necessary and never derivative. I want you to know who came before. And I want you to know that everybody is inspired by other people. The pressure, especially on women, to act as if they never listened to anybody that they sound like, and created themselves out of thin air, is ridiculous. I think an artist can be brilliant and still remind you [of someone else]. It’s okay!

I also wanted to ask you, what women influenced you who were not musicians?

Katharine Hepburn! I probably found her ‘cause she was a fellow Scorpio. And she looked a little bit like my mother.

I liked how to down to Earth she was. There are these rich people… It drives some of us to do great work and it kills some of us. [But] there are some wealthy people who are so altruistic and enlightened. You know, she grew up with a lot of money but she [had] common sense. And she held on — to her career and to her life. Her very unorthodox [life]. I really love her.

Two of your last three albums have been collections covers. Coincidence? Or are you feeling more drawn these days to doing albums of covers?

I think that some of it is business — that’s just the truth of it. If you go six years without making a record, it means you won’t have enough money to stay in the music business. So if I don’t have the impetus — which I didn’t, you know, it was a rough time for me — if I didn’t have the songs of my own, [if] it wasn’t time to write yet, what are the songs that will express what I’m feeling? What do I want to say now? Until I write something [new].

I guess I just pick [the songs that] I am thinking of at the moment. [It] has to do with history, honoring my family, the song, what it stands for, my career, my voice at the time -- all that stuff.

Looking back — this is 40 years since your debut. Any thoughts on your first album 40 years later?

I think it was brilliant, you know? I think it was timely. If I hadn’t become a kind of phenomenon and just listened to that record, I think we’d say “This is one of those records that belongs up there with ‘Good Old Boys’ with Randy Newman, or any of the other great storytellers of that time. The producers did a beautiful job and yeah — I think it’s a great collection of diverse pop writing.

I was really fortunate to kick that door open in the wake of all the disco and shit that was going on. And I think I did that not consciously — but not totally unconsciously either.

It is an amazing album. No two songs on it really sound the same — and it didn’t sound like anything else [from the time]. Just to circle back to the new album… I just watched the new clip for “Nagasaki.” It’s a very entertaining video! Did you do all the harmonies in your rendition?

What are your feelings about the role of women in popular music these days? How do you feel their role has changed [over the years]?

The role of women in music could be much greater [and] more celebrated than it is. It’s divided racially. Girls of color [are] forced to embrace this street whore bullshit of the lowest common denominator. Then white girls, they respond with a boring non-sexual persona… They like us to stay divided. Makes it easier to sell to us.

I liked wearing the strip clothes on stage and then singing the serious music. I liked mixing it up, it was the only way I could fight the pressure to conform to a kind of image. Are you rock? Are you sex? Are you a songwriter? Hey, I am what I want to be. I am a totally unique woman of genuine musical depth and odd sensibilities. I am good at what I do, and I decide what that is, when it changes [and] when it does not. So I did that lace gloves and spandex suit for Pirates, and sang those moving, emotional stories. I think that is my contribution: to defy expectation, to insist on defining by self. I suffered in marketing because those nice folks at Warner Brothers just didn’t know what to do [with me]. But I made my own way.

I am sure people under 30 have no idea who I am or what I am talking about. But the two Rolling Stone covers in just two years echo how [great] my initial impact was. And while my own career has not been, let us say, stellar, I have been very happy to know that my work went out into the ether and became a part of people. That’s the main thing… In the end, I believe it is the quality of the work that God sings through, and that is what matters. In the end, I want a song people are going sing, at least in their hearts, that is going to bring them solace, sex, hope, laughter -- some kind of bridge between their reality and the great place they could be.

One last question. Any thoughts on the song “Where I Like It Best?” I know it wasn’t the single from [The Sermon on Exposition Boulevard] but it was my favorite on that album.

Tags: Rickie Lee Jones , music , interview
Support Feminist Media!
During these troubling political times, independent feminist media is more vital than ever. If our bold, uncensored reporting on women’s issues is important to you, please consider making a donation of $5, $25, $50, or whatever you can afford, to protect and sustain BUST.com.
Thanks so much—we can’t spell BUST without U.