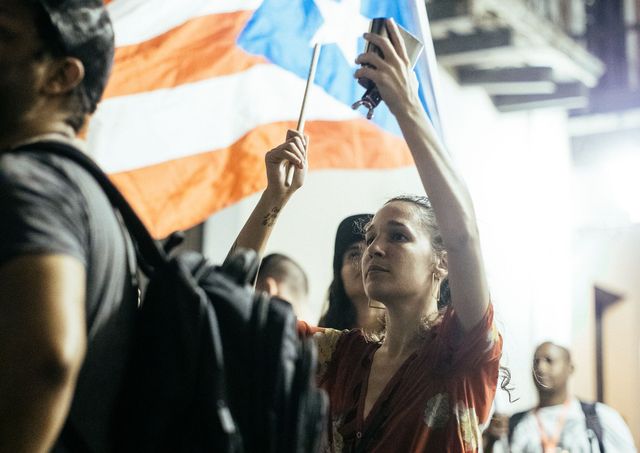 In the last month, the world witnessed how music, unity, and protest can take down a corrupt and sexist governor, and among the artists leading the revolution is Puerto Rican artist iLe.

iLe, like many other artists at the protests, hit the streets every day demanding #RickyRenuncia. The protests were sparked after the Centro de Periodismo Investigativo released 800 pages of a private chat uncovering sexist conversations from political leaders. The chats revealed a text of the former governor saying, "Vamos caer le encima a esa puta" (we'll beat up that whore) in reference to Melissa Mark-Viverito, Vice President of the Latino Project. The chats also revealed corruption at the highest levels.

"Colectiva Feminista were the ones who initiated most of the protest that went those days, so we have a lot to thank them for,"  iLe told BUST. "I think that now we are paying attention to what is going on. Suddenly we are little by little seeing the empire being destroyed."

Activism is not new to her or her family – it is a reflection of who she is, and it’s clear in her music. "I just see it as my duty as a Puerto Rican and a citizen," iLe said. "To be present, whenever I can be. And now that we have the internet, it's important also to empathize and feel closer to other situations in other countries as well. As we heal, we can have that solidarity from other countries, and that always gives us a boost."

Born Ileana Cabra Joglar, iLe was formerly the female voice to the musical group Calle 13. She is the sister to René Pérez Joglar (also known as Residente) and Eduardo Cabra (Visitante).

"I feel lucky that I grew up in a family that taught me well and from a very grounded place," iLe said. "It let me realize the importance of being present from where you are and where you come from. I feel very grateful for that because a lot of people from my family taught me things that I wasn't learning in school."

iLe has been using music as a way to bring forth issues on the island since the beginning of her solo career. In the song and video "Temes," she tackled the rise of women's abuse on the island, an issue which has only worsened after Hurricane Maria.

"The women's situation is not only a situation that happens in Puerto Rico but something that unfortunately happens around the world, and it's something that we need to care about," iLe said.

Her latest album Alamdura is a political grito. A play on words, the title Almadura takes the Spanish spelling of the word soul (alma) and replaces it for armor (Armadura). The title means a shield of the soul. The cover has her mounted on a white horse dressed as a Boricua warrior. The island has a long history of music, poetry, protest, and activism, and iLe is an inheritor and reflection of this history.

"In this album, I was focusing on our inner strength," iLe told BUST. "We sometimes forget that we have an inner strength inside of us that we can use in our favor to be ready for whatever we need to be ready for. So, I think we're in that moment right now – not only in Puerto Rico, but in the world."

The album opens with the warrior song Contra Todo. With horns and rhythmic drums, the song is the sound of Puerto Rico. She begins in Spanish, singing, 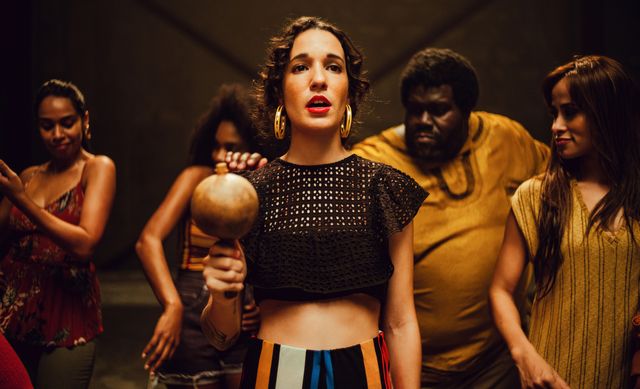 "I feel the first song, ‘Contra Todo,’ is the song that describes a little about what the whole album is about,” she said. “It's very direct into our own battles and shows that it's important to recognize that strength we have is like our shield."

The album includes rhythms of bomba and plena, the Afro-Caribbean music from the island, as well as salsa and Spanish trap music.

iLe says she loves world culture and different forms of music. But for now, she feels closer to Carribean music: "I feel like it needs to be more known. We have such a great musical history that we ourselves don't know enough about. That for me, is important." In her creating this album and tapping into her Caribbean roots, she is not letting the music or history be forgotten.

"That is what worries me; you know when we forget our past. I don't believe in forgetting the past. I believe in transcending the past," iLe said.

iLe’s lyrics are very relevant to what is happening not only in Puerto Rico, but around the world today.

"The government of the United States and how it's managed is very sick-minded," iLe told BUST. She went on to explain that this is especially true when we look at how the United States government has treated Puerto Rico; iLe says she is part of a small group of people that wants Puerto Rico to be independent, and she feels that the want for independence is growing among Puerto Ricans. The debate between independence or statehood is complicated and fraught among both Puerto Ricans on the island and the diaspora.

She explained, "We have received so much abuse throughout the years we start to believe that we're less and that we can't, but we can. I think nowadays, younger generations are reminding us how capable we are of doing whatever we want with our own country."

One month has passed since the former governor of Puerto Rico, Ricardo Rosello, listened to the demands and protests of the Puerto Rican people and stepped down as governor. This was a huge accomplishment: many around the world looked upon Puerto Ricans in awe of what they accomplished.

"What we did was very important. Not only was he a governor of Puerto Rico, which is basically like our president, but he was the son of a former governor, and he's part of the statehood party,” she said. “What we accomplished was a very important goal and is something I myself never imagined would happen."

Her new video "Ñe ñe ñé," exclusively premiering today on BUST, is a song set to folkloric Plena music. It tells the story of people in power who abuse and shift the blame.

"We are finally noticing that the world is wrong, you know. Our system is working against us," iLe told BUST.

With so many government officials seeking to line their own pockets both in Puerto Rico and throughout the world, iLe said, we as a society are changing the system. We "are finally finding ways to construct more instead of destroying."

She explained, even though Puerto Rico is in the middle of a battle that might take a long time she's happy to see so many people, "noticing that we need to do something about [our current system.]"

Almadurais an album about protest, love, and protection, protecting our planet, our land, and our community.

"For me,” iLe said, “art is the revolution. It's a way to finally speak out.”