In Her Final Show, Mitski Confronted The Spectacle of Performance 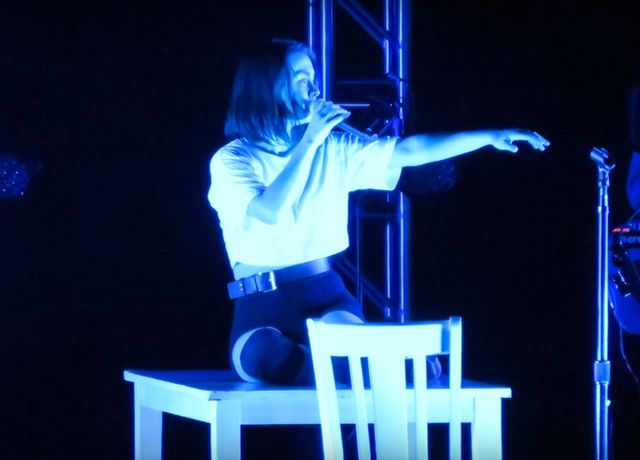 Sunday night, Mitski stepped on stage for the last time, indefinitely. Wearing a white tee, black bike shorts, and a pair of knee pads, she appeared before the buzzing crowd without reacting to its rising volume. After a few measured steps and a 90-degree turn, she stopped, revealing only her profile. Her eyes were low and locked but not downcast, her arms at her sides, her body still and ready. She waited for the band’s machinery to kick in.

This show, just after sundown in Central Park, finished off the Be the Cowboy tour. It was also Mitski’s goodbye to live performance, at least for now. Fittingly, a weight hung in the air: music echoed throughout the park so that latecomers only had to follow the sound to find their way, the tree canopy above us trapped those teal and pink neon lights, doing their part to scaffold our temporary cathedral. And on a Sunday night in the residue of late summer, with a few precious hours left before another work week, the energy in the audience felt soberer than the typical concert—and a bit more wistful.

Maybe that mood resonated because Mitski felt it too. “It’s ending in NY where I came up,” Mitski told Pitchfork. New York, where she went to school, first in the city at Hunter and then upstate at SUNY Purchase. Here, where she first started making music, before she had a cult following and a legacy.

To some, Mitski is now known as the indie queen of catharsis, but the artist herself resists being pigeonholed as a sadgirl icon. In a Pitchfork interview, she said:

"I was always bothered when people say, ‘I cry to your music, it sounds like a diary, it sounds so personal.’ Yes, it is personal. But that’s so gendered. There’s no feeling of, ‘Oh, maybe she’s a songwriter and she wrote this as a piece of art.’"

So on Sunday, Mitski kept her communication with the audience to a minimum. She waited ’til deep into the show to speak. And of course, she never yelled obnoxious crowd-pleasers into the mic, she didn’t call out the venue or ask if everybody’s having a good time tonight. Instead, when Mitski finally spoke to us, she kept it simple. She thanked us for coming out, thanked her opener, Lucy Dacus as well as all those who support her on stage and off, and named each of her band members. With her comments about intimacy in mind, I think that Mitski’s performance was as much about establishing a boundary as about articulating her art. She’s aware of her status as an alternative idol—Mitski had a small but deep fanbase, especially among queer people, since she started making music, and her audience has been expanding since Puberty 2. Now, Mitski’s grappling with all that comes with celebrity: the false bond that’s expected to blossom between performer and audience, the assumption that fans know the artist by absorbing her art. When those inevitable “I love you!” shouts started to bubble out of the crowd between songs, each one rang with an ironic echo. Mitski didn’t offer the eager strangers an “I love you too” in return, she politely turned down the concert script. In light of her words and her decision to step away from touring for a while, it makes sense that Mitski’s reminding us that as “personal” as her lyrics might sound, we don’t actually know her.

Chalking up Mitski’s art to sadness not only mistakenly personalizes it, it reduces it to a single note. If you claim Mitski only makes music to cry to, you strip her songs of the layers she built into them—their emotional depth and their cultural criticism. Take this show as a slice of Mitski’s discography and you’ve got: a snarky, crushing rebuke of Americana’s attachment to whiteness and masculinity (“Your Best American Girl”), an ode to music framed as a love song (“Geyser”), and a cutting take on beauty, its expiration date, and the relentless desire for it anyway (“Liquid Smooth”). Plus, an open and caving breakup song wrapped in the metaphor of a forest fire, equally redemptive and devastating (“A Burning Hill”) and a portrait of mania and unemployment, which burns out in under two minutes (“My Body’s Made of Crushed Little Stars”). And that doesn’t even cover the entire setlist.

Live, Mitski delivers all of it and more. While some artists falter on tour, Mitski’s vocal talent is on full display. She sings with unforgettable clarity, her voice cutting the air like a blade slicing a ripe peach—not with violence but with precision, not with urgency but with intention.

Her choreography is stunning and strange. Mitski and her choreographer Monica Mirabile have crafted their own uncanny visual style, instantly recognizable and difficult to describe. Most of her movements are slow and decisive, which make her bursts into hair tosses, leaps, and thrashes even more jarring. At one point, Mitski clawed the air. At another point, she sat down, leaned back, and started to spin all while kicking her feet in slow swirls, as if riding a bike at the bottom of the ocean. During “Dan the Dancer,” she jumped and spun across the stage as she sang, “I’m not gonna be what my daddy wants me to be.” She slapped her own ass on the song’s final line: “I’m gonna be what my body wants me to be.” During another song, she held her palm before her—like a fan, a face, a mirror, or all three. And she did a mock strip-tease during her ballad on city-born loneliness, “Nobody.” Mitski parodied concert performance, but she also used it--as a storytelling tool, an art form, and even an inside joke.

But Mitski wasn’t only a striking presence on stage. She granted the stage itself a presence: that empty space became a character in her performance. It wasn’t just a pedestal to hold her but something with which she interacted. She reached into it, arched her body through it, ran from corner to corner. She filled the stage with tension and then eased it into elasticity. And with the cooperation of our imagination, she shaped the air around her and conjured objects into it.

The equipment typically intended to remain concealed by darkness, ignored and unseen, became an integral part of her show. Mitski grabbed the mic stand and transformed it into a prop—a gun locked at her side as she stands in soldier-rigid stance, a trophy belt above her head as she poses like a heavyweight champion. Mitski is always one step ahead of us. On this tour, she actively toyed with the concept of performance, adopting a new persona with each twirl of the mic stand. She did bring a couple actual props with her too: a simple table and a single chair. She extended her body across the table top and froze like an upturned animal corpse on its surface during “I Bet on Losing Dogs.” Later in the same song, she lifted her leg like a dog pissing on it. Halfway through “Geyser” Mitski gently upended the table, patiently pushing it onto its side. At first, she crouched beneath the structure as if it were a shelter, but in a few beats she was throwing her body against the wood, shaking the table legs as the song crashed toward its final notes.

Mitski challenges the spectacle of live performance in the most playful, defiant, and palpable way I’ve ever seen. She transforms and deconstructs her props. She mocks and teases the space around her, builds into it and rips it open. What’s a better method of confronting performance than fighting with the stage itself?

Of course, Mitski also clues us in to the fact that we’re part of it all too. We move in rhythm with her and cheer at the right moments. We sway to the slow songs, and we do the double-clap during the stand-out “Nobody” just as we memorized it. As her closer fades, Mitski slowly bows to the center, left, and right. We applaud.