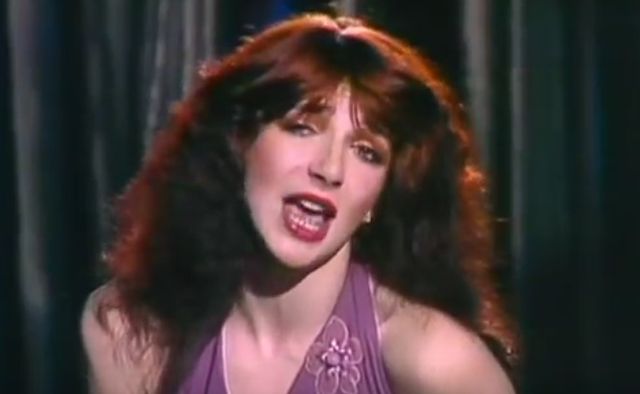 Confession - I am obsessed with Kate Bush and, like most people, it started the first time I heard “Wuthering Heights.”

It sounded unlike anything I had heard before, a haunting, ethereal ballad based on a book I merely skimmed through for AP English. It certainly wasn’t off-putting, but it was at odds with what I thought a popular song could be. I mean, few people would think to start a song with such lyrics as: “Out on the wiley, windy moors/We'd roll and fall in green.”

But there’s something about it that draws you in that eerie, high pitched howl which puts you face to face with Cathy’s ghost at the icy window.

The first time I heard it, I had to hear it again. And again and again. And I haven’t stopped since. And soon after, I had to check out her entire discography. I was blown away. While Bush has achieved superstar status in the U.K and other parts of the world, she’s not as well-known here in the United States. Which amazes me, because she’s so damn great!

Her songs are complex but catchy. They’re full of smart literary and historical references. She’s both earthy and ethereal, a rare breed of artist who has made her whole career on being wholly herself - writing her own songs, coming up with her own music videos, and sometimes, producing whole albums by herself. She accesses this deep reservoir of emotions and invites us in. In celebration of her birthday today (July 30th), I’m looking at the top 10 reasons why I love Kate Bush.

1. Kate Bush was the first female artist to have a number 1 hit in the UK with a self-written song, “Wuthering Heights,” which she wrote when she was only 18! She insisted that it be the lead single from her debut album, The Kick Inside. The record company EMI wanted it to be “James and the Cold Gun,” but she knew what she wanted.

3. Three words - Hounds. Of. Love. She produced her 1985 album Hounds of Love herself! Wanting to be free of any label influence, she literally built her own damn studio in her backyard. Obviously her songwriting is always going to be top-notch, but producing is a different skill set, one that is fully on display here. Just listen to the song “Waking the Witch!” The way she layers all those weird voices and church bells with some sort of Crucible-esque storyline? We have no choice but to stan!

4. The first side of the album contains certified bangers like “Running Up That Hill (A Deal with God)” and “Cloudbusting." The second side is a conceptual album entitled The Ninth Wave, a collection of seven songs that tell the story of being alone in the water at night, trying to stay awake and avoid drowning.

5. As great and groundbreaking as it is, Hounds of Love wasn’t even the first album she produced herself. The first was The Dreaming, which she made when she was the age I am now (23), a fact I try to distance myself from when I can't get my act together and have 2 weeks worth of dishes piled up in my sink. She was an early adopter of the Fairlight Synthesizer, which went onto becoming a major element of a lot of eighties music.

6. While Bush herself has for the most part stayed away from politics (aside from that infamous comment about Theresa May) her songs have always had a political bent to them. “Army Dreamers” is an explicitly anti-war song, as is “Breathing," written from the perspective of a fetus during the nuclear aftermath. “The Dreaming” concerns the struggles of indigenous Australians. Songs like "Running Up That Hill" and "Babooshka" have examined gender roles.

7. She has only ever toured once. ONCE. That is unheard of in this day and age! In 1978, after the release of The Kick Inside, Bush embarked on a tour of the UK. The Tour of Life combined music, dance, magic, and mime. She never toured again and rarely performed live, until her sold-out concert series in London in 2014. While I would have loved to be able to see her perform, I respect her decision to make music on her own terms.

8. She and Prince once collaborated in 1993 with what is, in my humble opinion, one of the most underrated songs of all time, “Why Should I Love You"

9. Those music videos, though! They’re filled with interesting imagery and delightfully bizarre choreography. My colleague Francesca asked me to include the video for “This Woman’s Work” with the comment: “I just love the choreography! It’s like a dance without being a dance. Is that pretentious?” No, it’s not pretentious at all, Francesca! Kate Bush leaves many of us speechless! Sometimes I will watch “Wuthering Heights” ten times in a row, and I have no idea why! And it’s clear I’m not alone!

10. Because she is just the best and the weirdest. No further comment.

Big Boi Is Obsessed With Kate Bush Because DUH Who Isn't?!

Kate Bush Is Back With The Director's Cut

Tags: Kate Bush , Wuthering Heights , Hounds of Love , music
Support Feminist Media!
During these troubling political times, independent feminist media is more vital than ever. If our bold, uncensored reporting on women’s issues is important to you, please consider making a donation of $5, $25, $50, or whatever you can afford, to protect and sustain BUST.com.
Thanks so much—we can’t spell BUST without U.