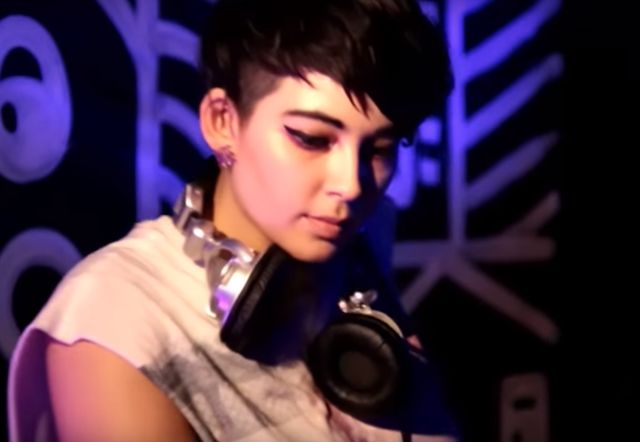 For the past month, entry lines at a club in Queens have been wrapping around the block.

Drawing the crowds are DJs from the collective known as Working Women. DJ Nicely, Nina, and Voices have been hosting a residency at Nowadays in Queens all July. And their presence is magnetic.

Since Tanya Lyon, Kristin Malossi, Nina BC, Ashlyn Behrndt founded the collective in 2016, Working Women has been pushing for women, queer, and nonbinary DJs to get paid fairly and booked often. The project “embraces improvisation, emotional exchange, theatricality, collective listening, taking knowing chances and, above all, an ongoing commitment to the art of DJing, collaborating and exploring a breadth of musical styles.”

Working Women’s emphasis on vulnerability, intimacy, and collaboration above ego creates a palpable atmosphere at their gigs. It’s a refreshing departure from seeing smug overhyped white dudes behind the decks.

And, of course, it’s more than that. Working Women confronts deep-seated misogyny in the music industry. "Maybe when we reach the point where sidelining, gaslighting, denying, undermining, taking over, reductionism, hostile environments and sexual harassment have disappeared, there would be less of a reason to create all-female projects,” prominent Amsterdam-based DJ Paula Temple told FADER in an interview discussing her punky, apocalyptic techno.

The four founding artists have expressed that at times the name Working Women can be limiting too, though. Sometimes they’re tagged Women DJs as if they’re some kind of isolated genre. And sometimes they feel like their name doesn’t accurately capture Working Women’s image--because full gender inclusivity isn’t a footnote to them, it’s a core principle of their collective. One of Working Women’s biggest clients, Sara Skolnick (Riobamba) told the New York Times, “The future is nonbinary and inclusive.”

But Working Women isn’t the first collective to break with bro-y club culture. They owe a lot to the Brooklyn-based Discwoman.

Discwoman’s creators—Frankie Decaiza Hutchinson, Christine Tran, and Emma Burgess-Olson—found each other in 2014. Burgess-Olson was born in the Bronx but grew up immersed in the Kansas City rave scene. Hutchinson left London as a teenager and spent her first few years in New York organizing photography shows and film festivals for and by women of color. And Tran put together underground punk shows in New Jersey before moving to the city.

Now they’re an iconic presence in New York nightlife. Committed to retaining an intimate, familial feel with global allure, they represent 17 DJs who perform everywhere from Bushwick to Tokyo. Remembering what catalyzed the collective, Tran told NPR, "We wanted to bring together like-minded people who were creative — marginalized creatives, whether LGBT or of color, just people we could relate to or identify with. That's where I got a lot of my event production background, learning all the technical things involved."

It feels like the current industry setup keeps people from thinking that they can make music — the language around it and the idea that you have to have some sort of technical education to be a musician. It's like "you need to know how to use drum machines, you need to know how synthesizers work," as if that's the only way you can become a good producer. That's a really limiting way to thinking about music. It's just not true . . . If someone had told me that when I was a kid, I would have thought a lot differently about making music. Honestly, if you want to bang a spoon on a table and just record that, that's actually really cool — music isn't really this specific, guarded science. Not all music producers need to know what every single button on the mixing board does, you know?

Burgess-Olson has rejected this kind of gate-keeping from the beginning. Instead, she says Discwoman is all about building a collaborative community, a place where people feel empowered people to learn and re-learn: "'Do you want to be a DJ? Cool — we'll teach you. Do you want to learn how to make music? Let's connect you with someone who wants to teach you that.' People know they can comfortably reach out to us and feel supported."

You can find Discwoman’s clients at Bossa Nova, a hub in Bushwick that serves as a home base for the collective. Usually when people think of Discwoman, they think of techno. But at Bossa, tastes are eclectic: in addition to wide-ranging techno, you’ll also hear house edits of hip hop classics, reggaetón, and rap. DJs like STUD1NT, Riobamba, and SHYBOI each bring their own distinctive sound to the space. In UMFANG’s mixes, you’ll catch influences of experimental noise. SHYBOI’s latest music is a glitchy tribute to outlaw culture. While Riobamba describes her style as “rowdy, deeply researched live sets [that] reflect back nightlife’s power as a site of joy and resistance.” At Discwoman gigs, you’ll catch the full spectrum of the technofeminist soundscape.

The talent on Discwoman’s roster has been drawing international attention. And collectives that follow the project’s lead are popping up everywhere—because they’re energized and effective and necessary. SHYBOI tells Fader, “It’s without a doubt that queer women/gender-nonconforming/trans artists, especially those of color, are treated differently than their white male counterparts . . . Having the backing of these incredibly talented people has pushed me to test myself more, tweak a boundary here and there in a different direction.”

She adds, “No one on this roster takes any bullshit.”

Dude York's "Falling" Will Make Poptimists Out Of Us All