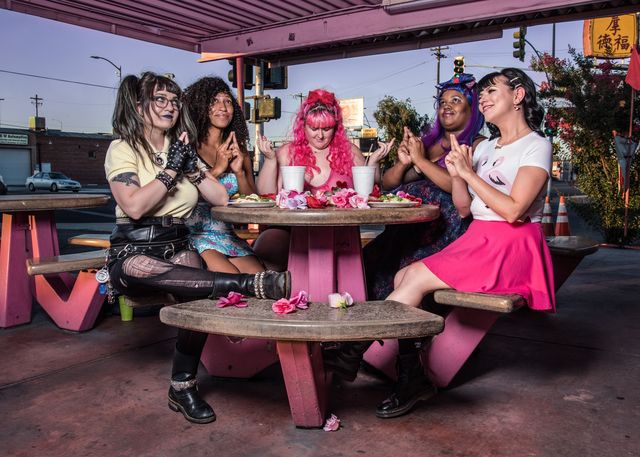 Fresno, California’s Fatty Cakes and the Puff Pastries knows how to sashay along the line between vulnerability and empowerment with a wink, a nod and a cherry on top. If you’ve already heard their song “Fat Grl Tears,” off the band’s debut self-titled 2018 LP produced by legendary LA punk pioneer Alice Bag, then you probably already know that the tears in question represent a syrupy, bittersweet mix of emotions: Sorrow and rage for a world that fears and demonizes fat bodies and encourages young girls to hate themselves thin; laughter for the absurdity and ridiculousness of this antiquated patriarchal construct; and tears of joy for the self-love and exuberance of owning, loving and celebrating your own human vessel.

Per usual, Fatty Cakes and the Puff Pastries has taken “body positivity” and given it a turbo-powered frosting injection. Perhaps we could call this new movement “body ecstasy?” The hungry stars of this video—the band’s vocalist and uke player Amber “Fatty Cakes” Fargano and bassist Vishinna “The Bass’D Goddess” Turner alongside a gaggle of Central California Valley artists, activists and upstarts—flaunt every delicious roll and dimple of their big, bodacious bods (while enjoying some snacks from Fresno-based barbecue joint, Miss Piggy's BBQ, owned by Turner's mom).

Prominent fat liberation activist Virgie Tovar, who urges her followers to “lose hate, not weight,” provides a juicy cameo for the ages. As she noshes exuberantly into a donut while mugging for the camera (daring us—no doubt—to question why we don’t always eat like this in public), a new twist on the “crying” theme emerges. These are not wails simply of discontent or even joy. This is a cry (the good, cathartic kind). A battle cry that urges us all to really sink our teeth into the meat of the matter. That is, to really chew on the fat.

I asked the band what the song means to them.

“'Fat Grl Tears' was written as an anthem for fat women and femmes to call out the fatphobia they face, whether in the media, strangers, or people they love, and in turn celebrate their bodies as an act of resistance. We were very lucky to get fat activist and body positive community voice, Virgie Tovar, as one of the stars of the video. The work she has done through her TED talks, published works and journalism reflects so much of what this song, and our band, is about. What is it all about, you ask? Eat what you want in public. All bodies are good bodies. 'Fat Grl Tears' is exactly that!” 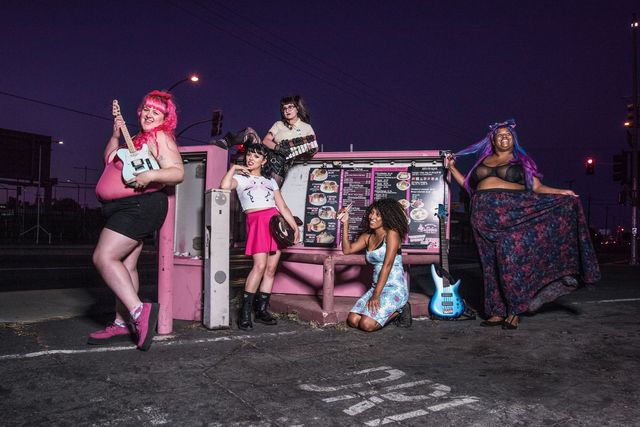 You can follow Fatty Cakes and the Puff Pastries here.

"Thunder Thighs" Is The Body Positive Anthem Of Summer 2017