Details
BY Gracie Western
IN Music
Published: 24 May 2019 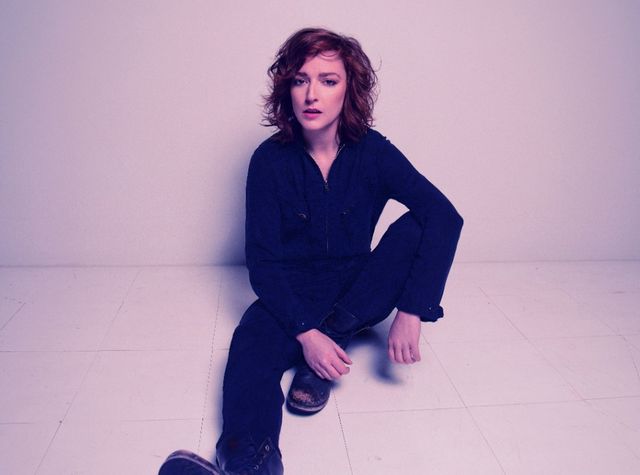 I would have done just about anything for pronoun’s righteously angry “i’ll show you stronger” this February, curled into the window seat of the always-smelly Bolt Bus, sobbing after a breakup that had torn out my insides and spit them on the ground, much like that habit of his I had despised only days before. I needed music like this. So thank you, Alyse Vellturo, for the breakup album of all breakup albums.

Vellturo’s first full-length record, “i’ll show you stronger” is not the compilation of songs you listen to halfway through a box of tissues and a pint of Ben & Jerry’s, but the album you play on repeat when that beautiful rage follows, your steps not weighed down by a heavy spirit, but lifted up by a furious stomp-stomp-stomping along to the steady drums in pronoun’s tracks.

Not only is Alyse an incredible songwriter and artist, but she is seriously a badass in all areas of her life: when not writing, Vellturo does all the production work for her music, designs her cover art, works a day job, and even has her own record label, Sleep Well Records. Although I doubt she’s sleeping that well with the multitude of endeavors she’s undertaken.

“i’ll show you stronger” balances a soft, dreamlike state with a self-assured fierceness, resulting in the unapologetic mammoth of an album that keeps it real, while reaching deep inside for the kind of strength that we all need in one moment or another. I was lucky enough to catch up with Alyse on her latest work, women in music, and her upcoming tour.

You recorded your EP, “There’s no one new around you.” from your bedroom. Was “i’ll show you stronger” also recorded in your bedroom?

A lot of it was. I would use “run” as a good example. I finished that song, and when I got the first mix back, I was like, “This sounds ridiculous. You need to have live drums on this.” It was so important to me for so long to do everything by myself. But at what cost? Are you really going to ruin this song, just so you can say I programmed the drums on it? There were probably four or five tracks on the album that did have live drums. But all the guitars, and most of the bass, and all the vocals, I did in my bedroom.

I find your music super interesting. It exists in this liminal space, where you combine high soprano with super low vocals, where you’re floating between genres, and carving your own space in 2019, yet it still reminds me of 90s rock, like The Cranberries. That in-between state you occupy is fascinating because it displaces the listener. Is striving for the unexpected part of your creative musical process?

I don’t ever want to make the same song. I always say that. But I wouldn’t say that’s a part of the process. I think it just happens. Because I’m making it alone, I want to make music that I really like, and there’s no one there second guessing that. There’s no reason for me to be second guessing anything. I’m just working on something until I like it. So, it’s kind of weird, but it’s also not weird. When people ask me to define my genre, I don’t know what to say. Not in the way of ‘it’s so weird,’ but, ‘it’s so simple.’ It feels like something that should sound familiar, but for some reason it just doesn’t.

Have you found that being in charge of your own record label, or that side of things - I know that’s your day job - does that make it easier to find your own space within a male-dominated music industry?

I’ve realized, since I’ve started doing interviews and people have started asking me these questions, that I don’t think about gender very much at all. Which is very strange, it’s something I’m trying to kind of work on. I’ve been super lucky, where even my day job is run by women. The CEO is a woman, all the SPs [Senior Producers] are women. So, I’m trying to get better about that because I realize that that’s not normal at all. It’s extremely lucky. Pretty unheard of in the music industry, let alone any industry. At the end of the day it’s about confidence, and believing in yourself and your knowledge, which I’m pretty bad at. I’m also trying to get better at that.

Have you found that experience to be the same as an artist?

I also don’t think about it that much. I do think about how - I was talking about this with someone earlier - most industries, and I would go as far as to say, the world, was not designed for women. We’re still literally fighting for our rights. I think I’ve noticed that when we’re touring, it’s just not designed for things, quote-on-quote, “girls would like to do.” Like, do you want to sleep on an air mattress on someone’s floor in Columbus? Take time off your work, and not make money, and lose money? I love it, but I think stereotypically it doesn’t sound very appealing in the way women have been raised. The different rules that have been bred into us without us even realizing definitely hinders that too. But I do think that’s in any society, and in any job, and as I said, the world. And it’s still adjusting, and we’re fighting for the world to adjust, but it hasn’t grown with us in consideration. It’s always been kind of a man’s world, and we’re working on that.

You mentioned in an earlier interview with Highclouds that “i’ll show you stronger” takes on an angrier, more empowered tone compared to your EP, reflecting your emotional process post-heartbreak. What was it like to be able to reclaim that power, and now to be able to share that with the world?

It was super cool. It came over the course of three years, so it was kind of interesting. I didn’t even really realize at the time that that was what this album was about. I wrote half of it three years ago, while I was writing the EP. When I came back to try and finish them, I had to put myself back in that space, because the lyrics are so personal, and at points, gut wrenching. It’s that breaking point where you’re in the twilight zone, and you’re like, isn’t this kind of crazy? And then you wake up one day and you’re like yes! This is insane. It’s the final straw where you’re like, wait a second, I’m upset, and I don’t like myself that much, but I know I’m not deserving of this. So it’s good. I hope it helps bring other people confidence.

What are you looking forward to most about getting to perform this album live on your upcoming tour?

It always takes a bit with new songs, to get the right vibe with the band, because I do make it all myself. So it’s figuring out what parts work with which instruments. I’m excited for this run, to be playing it and to be figuring out what makes it sound great for two weeks straight, because after that, it’s going to be smooth sailing. For my old stuff, I can just play it with my eyes closed at this point. It’s a little nerve-wracking, but I’m excited to figure out how to make them sound best live.

Be sure to listen to "i’ll show you stronger" on all streaming services, and catch pronoun headlining at Rough Trade NYC on July 11.

Common Holly Is The Innovative Indie Artist You Need to Hear: BUST Interview

Tags: music , pronoun , alyse vellturo , breakup , i'll show you stronger
Support Feminist Media!
During these troubling political times, independent feminist media is more vital than ever. If our bold, uncensored reporting on women’s issues is important to you, please consider making a donation of $5, $25, $50, or whatever you can afford, to protect and sustain BUST.com.
Thanks so much—we can’t spell BUST without U.