Details
BY Bry'onna Mention
IN Music
Published: 10 May 2019 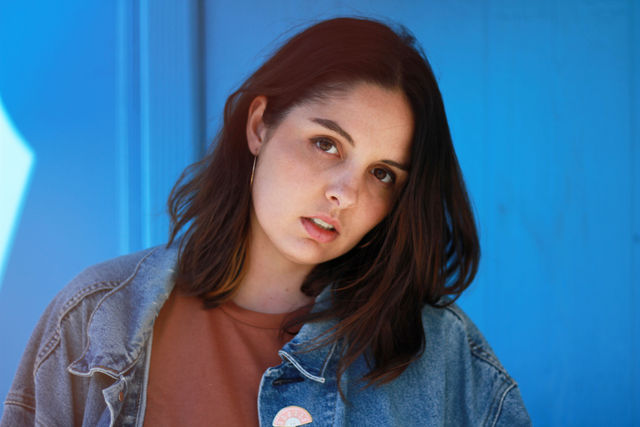 Described as “The Best DIY Rock Star You’ve Never Heard Of” by Billboard, Maddie Ross’s debut album Never Have I Ever is here and could not be more on time. Jammed packed with all the beloved looks, sounds, and feels of yore, but with all the queer flavor it desperately needed, the 10-track album soothes and rocks an early ‘90s baby’s middle school heart, delivering all the ‘00s nostalgia we’ve been missing. Her most recent video, “Liv Tyler” is television reimagined: bisexual contestants on MTV’s Room Raiders, an interracial lesbian Polly Pocket ad, a gay Coca-Cola commercial, and a nod to the best rom-com ever, She's All That where Maddie gets a makeover from cool girl to nerd and runs off with her female love interest.

Maddie Ross who is currently on tour with songwriting legend KT Tunstall--who slid into her DMs after stumbling across her music via Twitter--sat and talked to BUST about the power of social media, genuine authenticity, and how doing it yourself doesn’t have to be trash.

With the power of the internet mixed with putting yourself out there,how grateful are you to be apart of this generation’s access to reach however many people you want with your music?

I think it’s incredible! I know that there are so many terrible side effects of the internet. But, it’s kind of like, with everything in this world that is changing so fast. Like, when AOC [Alexandria Ocasio-Cortez] talks about the Green New Deal--this could be really fantastic, and we’ve got to stay on top of it and see the opportunities that are there, rather than letting it destroy us. And I mean I grew up as a teenager with social media. So I understand firsthand, the way that it can cause depression and bullying and all of that stuff. Even now I’ll do social media, take a little bit of a break or delete it from my phone for a little bit just so I can not be on my phone all the time. But that being said, I am so grateful. I tried to be open and authentic, because when I came out, I didn’t share it with the world until a year later. And now it’s like I want to share it. I try to be open and authentic on it and it has led to a lot of cool friendships.

And of course, KT Tunstall found my music through Twitter, which is so unbelievable. And I couldn’t of made that happen if I was trying to. And she is so amazing and authentic and loves to lift up other musicians. It’s just this crazy thing that would have never happened otherwise, because it’s not like I’m rubbing shoulders with celebrities. I don't have a manager or a label or anything like that, so I just feel so lucky in so many ways.

But also I think that just speaks to your talent. It can’t just be luck or by chance that that opportunity would happen. You would have to have the talent to back it up.

[laughs]Thank you. But I would also say hard work. After luck, the only way to honor that is to just be as good as a person as you can. And, by also being ready, so that if something does pop up, you can be like “Hell yeah, I can go on this tour with you!”

True! Being that you mentioned not having all this backing and everything being very D.I.Y-- How do you it? How do you stay independent and consistent?

My girlfriend Wolfy is the secret weapon. It’s like dating the world’s best producer and smartest manager with the most artistic eye and she has the best taste. She’s just do driven. She’s got this crazy work ethic--just very, very driven. To be an indie artist you do need a teammate of some kind. She’s just got this thing that like, “D.I.Y doesn’t have to be low quality. We have the ability for the artwork to look as good as if we hired a professional.” She’s just got high standards and loves to plan. Date night dinners will just turn into planning sessions like “What’s your 5 year plan again? Let’s reorganize!” 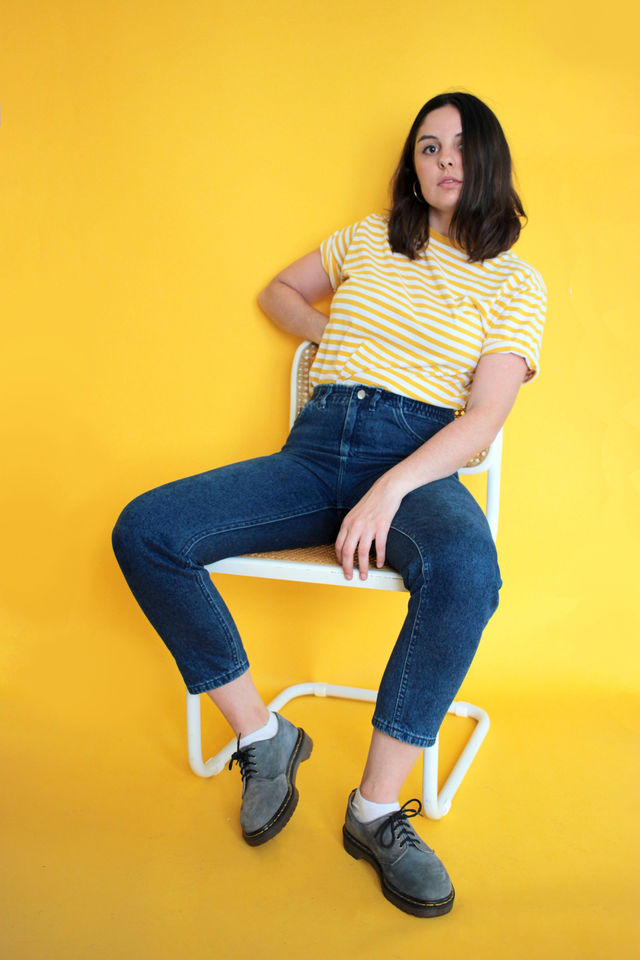 You have a very specific look and sound for the album--especially in the “Liv Tyler” video--which I really appreciate. In this day and age, where a lot of videos and songs all look and sound the same, why was it so important to have such a nostalgic single/album inspired by that late ’90’s/’00’s MTV era?

It is very intentional, but the other part of it, is that it just felt so right and so perfect. Wolfy, had the concept of this album, because I was getting a bunch of comparisons like “Oh, this Maddie Ross song sounds like it’s from a Rom-Com” or “this is ’00s Pop” from a lot of white men, saying it with the air...like that was negative. But then all the girls my age, or my gay guy friends, and all of us that grew up on Britney [Spears], and Avril [Lavinge] and Michelle Branch and just everything from that era, and it just really clicked. I realized, it matters who is consuming the music. And I’m making it for those people my age, so we just really leaned into it. I just didn’t want to be afraid of making that music.

And for the video--it also felt very natural. The director and I started talking about our coming out stories and comparing them and it was just glaringly obvious that we both grew up on pop culture. And we talked about the challenges of coming out, even though we had supportive families. But the root of the challenge is because we get all these homophobic messages from our entire culture. And we talked about how that impacted us and how we watched Room Raiders, but there was never a “gay episode” or something. And there is a lot of heteronormativity in the commercials. So it was just very cathartic for us to create a world where we were giving nods to everything that we loved, but also framing them in diverse context.

Even though it’s an older song and not on the album, I really like “Loners.” Can you tell me about your writing process?

Aww thank you. That was a special song for me. That song specifically, is like a precursor to the album. When I first came out, a lot of my songs were kinda darker and I was dealing with so much anxiety, and internalized homophobia and self-hatred, and like all those things, so my music wasn’t happy at all. Even though, that was the first time I had ever been in love in my whole life. And I think also never having the tools of seeing two girls together as cute. I used to want to be a novelist. So “Loners” was a track that Wolfy made. But half the time, I’ll start a track from scratch. And the other half of the time she’ll make me a track and I’ll write to it. But “Loners” was an ode to our love story.

Coming from a musical family--did you ever have any “AHA moments” where you decided this is what I want to do for the rest of my life?

That’s a really good question. But I think the real key to everything, was when I finally came out. I started releasing really authentic music where I just felt really powerful and amazing. I just hit my stride. And, people were identifying with the music. So it was like post-college, where I just felt like “You know what? I can fucking do this. And I’m going to do this. I don’t need permission, because we can make it ourselves, release it ourselves, fund it ourselves"--like, I’m paying for this tour on my credit card, with the hopes that I can pay for it all down the line. But with every release of new music, I felt more and more like I can really do this. So it’s more of a process than a ‘big aha’ moment for me.

I respect the process. I’m curious, about who your immediate influences are, because we really grew up in such a good time musically.

We did! I think at that age, you take influences from everything. And that was kind of a cool time, because Pop music had all these massive crossover stars. And even Wolfy, in the most loving way describes that era as Musical Tourism. Because there would be like this Spice Girl songs that would have a Spanish guitar, with heavy Spanish influence. And there is almost no limits in Pop. But also, being from the Bay Area, there were a lot of Bay Area rappers, but I listen to everything. My older brother was very into rock and emo, and he bought me my first Tegan and Sara cd, which is still my favorite thing of life. But my sister loved Top 40 and Slow Jam R&B. So being the youngest sibling has its advantages. I listen to everything. I don’t really care much about genre as much as I care about lyrics. Like does the person singing hold my interest? Is there story interesting?

How does it feel to have a complete body of work, available for everyone to listen to?

It is surreal! It’s seriously just powerful to know that we did it! We started creating this album in December. And we prepared this album so that it could be ready for this tour. And before I left I was frantically texting anyone I knew in the industry trying to pick their brains. And when I talked about it in therapy, she was like “I think you’re trying to have some control right now. But, you’ve done the hard work.” And we did. We put in so much hard work! I feel like we're in a very interesting space with our genre. It just naturally came. It kinda has pop punk elements so we don't really fit in with more indie garage music. And then we don't really fit in with pop right now, even though I feel like it is in the sense of choruses and structure. But I haven't seen a lot of people making the kind of fun, unbridled, pop songs that are guitar driven with this nostalgia feel. I'm excited!

Check out Never Have I Ever available today! And catch her on tour now!