Details
BY The LUNACHICKS
IN Music
Published: 25 April 2019 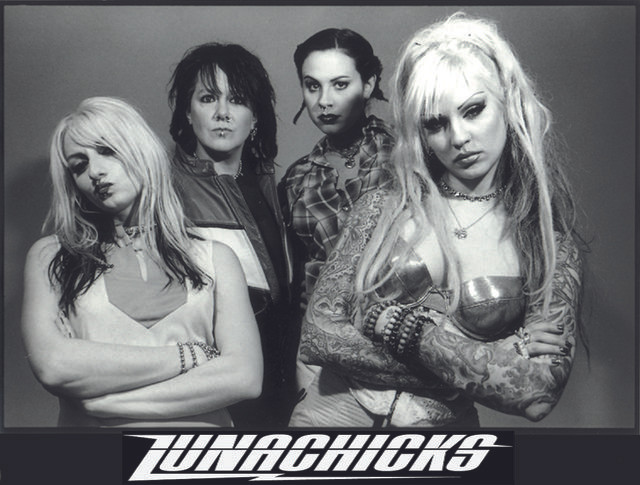 We formed the Lunachicks in 1988 as teenagers—four best friends from New York City who were obsessed with music and each other. Being in a band allowed us to devote all our free time to both of those things. That was the extent of our agenda. We had no idea what we were in for.

Kim Gordon and Thurston Moore of Sonic Youth caught one of our earliest gigs and wanted to produce us. We didn’t know who they were and never heard of Sonic Youth, not to mention we could barely play our instruments, but it didn’t matter. Holy shit. Just like that, we had a record deal with Blast First Records. Three of us had only recently graduated high school. The following year, we opened for Dinosaur Jr. on a European tour.

We were one of the first all-female U.S. bands of that era to get overseas. The press loved us, and we got the royal treatment. It was our first tour ever, and we were in a nice hotel, had back-to-back press meetings, made return trips to the lobby for interview-photoshoot-interview-photoshoot for what seemed like days. That’s how our career started.

In hindsight, it was a lot for us, and we were really young and naive. But that was the most in our favor the music-business machine ever was for us. So as we’re recalling our experiences, you have to remember that we were coming from the perspective of teenagers who fully believed we were going to be the next Kiss, like, next week.

During our second tour of Europe, around 1992, our eyes were yanked wide open and we saw the industry very differently.

From the start, our tour itinerary didn’t look right. The route had us skipping prominent cities, driving out of our way, and generally sending us all over the place. We’d say, “Why can’t we play X city? It makes more sense geographically for the tour.” We heard plenty of vague excuses and brush-offs, but never any clear answers. We were being given the runaround and couldn’t figure out why. Finally, our booking agent laid it out for us.

Hole and Babes in Toyland were touring Europe at the same time as us. Apparently, some clubs weren’t willing to have bands with women in them play within a month of each other.

We’d never before heard of anything like this happening. Growing up in New York City, we saw plenty of great bands that had women in them—the Stimulators, da Willys, the Maneaters, the Swamp Goblyns. It wasn’t weird to see a girl onstage.

So what the fuck were these clubs even talking about? They wouldn’t book multiple bands with women in them? Why? What’s the issue? Look at the Runaways! They were the coolest band ever! Who wouldn’t want more of THAT?? There were 400 guy bands playing that month. But the clubs filled their “girl-band” quota so they wouldn’t book any more? What the fuck?

We were so naive. Bands that featured women were often seen as a novelty act—not real musicians—and weren’t given the same acknowledgement as dudes who did the exact same thing. It was as if these clubs viewed bands that had women in them as comedy acts that promoters booked at a music venue every so often.

We didn’t believe shit like this actually happened until it actually happened. That was the first time we heard, “Sorry, no thanks, we don’t want you because we already had a girl band, so we can’t book you.” It wouldn’t be the last time. And yes, those were the actual words we were told. There was no attempt to conceal the sexism.

There were venues that flat-out rejected us. Promoters wouldn’t let us play a club because Babes in Toyland had played there a week earlier. All these rejections were based on nothing more than our sex. Doors were unapologetically slamming in our face.

Then there was the press. One magazine was supposed to feature us in a big spread, but because it had already done a piece on L7 in the previous issue, we got relegated to a little blurb. And when certain media outlets did write about us, they had an agenda.

Interviewers would ask us, “What do you think of Hole? What do you think of L7?” It felt like they wanted us to be at odds with each other. Like, “Oh, girls! They must hate each other!” But it wasn’t like that at all—we were psyched to be around other bad-ass rockers like ourselves. L7 were our good friends! It was annoying that they would even ask. Did they ask Nirvana what they thought about Soundgarden and Mudhoney? What the fuck’s wrong with you? Fuck off. 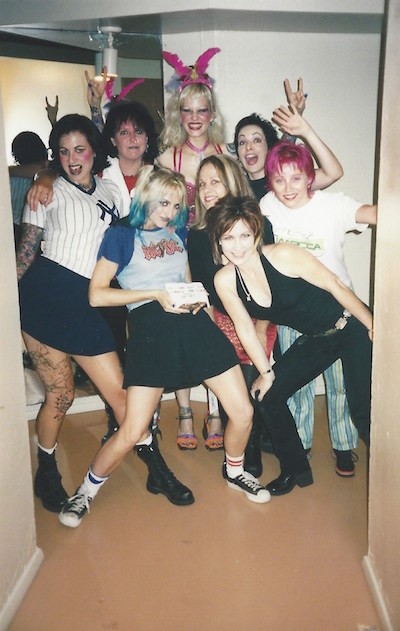 Lunachicks and The GoGo's on tour

This sexist nonsense wasn’t limited to the U.K. We got it at home in the States too.

It really was exactly like that. It was considered OK to not only have such policies, but also to freely admit to them as if they were well-reasoned. We encountered that shit time and time again.

Around ’93, our singer Theo grabbed a KROQ banner onstage during a show and said, “Pure KROQ, pure cock rock!” and tore it right in half rrrrrrrriiiippppp because the station wouldn’t play us. Why? They “already had” L7 on their playlist and couldn’t have more than one “girl band” in rotation. We were told those exact words. For whatever it’s worth, our music sounded nothing like L7’s or Hole’s or Babes In Toyland’s. Do we need to point out how many Nirvana and Pearl Jam clones were all over the radio during those years?

Some radio stations wouldn’t even play bands with female vocalists. It was really extreme in certain areas of the country. Not just, “We already have one,” but more like, “We don’t want any.”

The whole mindset was bizarre to us. We wanted nothing more than to see women form bands to help bulldoze people’s beliefs that music was something only dudes could do. But when we actually got out there and started touring and the clubs turned us away because another “girl band” beat us to the punch and nabbed the one slot that was up for grabs, it became clear that not everyone felt the way we did. Instead, we were presented with a kind of Hunger Games-type scenario, a deprivation exercise that pitted women against each other, one in which guy bands never had to participate.

It was so disgusting and shameful, but this bullshit is practiced throughout the world in every industry. As a means of control, the majority restricts the access of the minority. Whether that minority status is based on skin color, ethnicity, religion, age, sexual orientation, gender identity, income level, or whatever, only a precious few seats at the table are designated for them. It’s difficult to create a supportive community when you’re all vying for those spots.

And yet, we did make that community. There were so many cool fanzines, small clubs, and indie labels that grew out of the desire to champion bands like ours. And despite the external forces working against us, there was a feeling of solidarity and empathy among women in bands. The belief was that when any of us found success, all our careers would benefit. When we started out, L7 gave us lots of support; their bassist, Jennifer Finch, booked our first West Coast tour, and they really took us under their wing. When they got signed to a major label, we saw it as a good omen that doors would soon open for us. Years later, the Go-Go’s brought us on tour because they wanted other kick-ass women on the road with them. Joan Jett was and still is a big supporter of women in music. When it was discovered that a popular crowdfunding site was stiffing tons of artists, L7 included, Joan came through and will be releasing the new L7 album on her own label, Blackheart Records. And Kim Gordon, we gotta give her props. She was most likely looking to pull more women into the scene, and that’s why she and Thurston Moore were on the hunt for an all-female band when they stumbled upon us. When we had enough pull to start booking our own shows, our bills were full of awesome women: Tribe 8, Freaks, Special Head, Trick Babys—so many! Sisterhood is a real and lasting thing, not a novelty.

While the corrosive, systemic sexism we battled at every step of our career—simply for us to exist—was frustrating, there was no fucking way we were going to let it define us or our scene. There is so much more to our stories, our bands, and our music. If that meant we had to bust our asses to prove our worth as women and as artists, so be it. Bring it on. Hard work never, ever intimidated us—we’re New Yorkers. Our mission was to melt your face off so completely, no one would dare ask, “What’s it like to be a girl in a band?”

Tags: music
Support Feminist Media!
During these troubling political times, independent feminist media is more vital than ever. If our bold, uncensored reporting on women’s issues is important to you, please consider making a donation of $5, $25, $50, or whatever you can afford, to protect and sustain BUST.com.
Thanks so much—we can’t spell BUST without U.