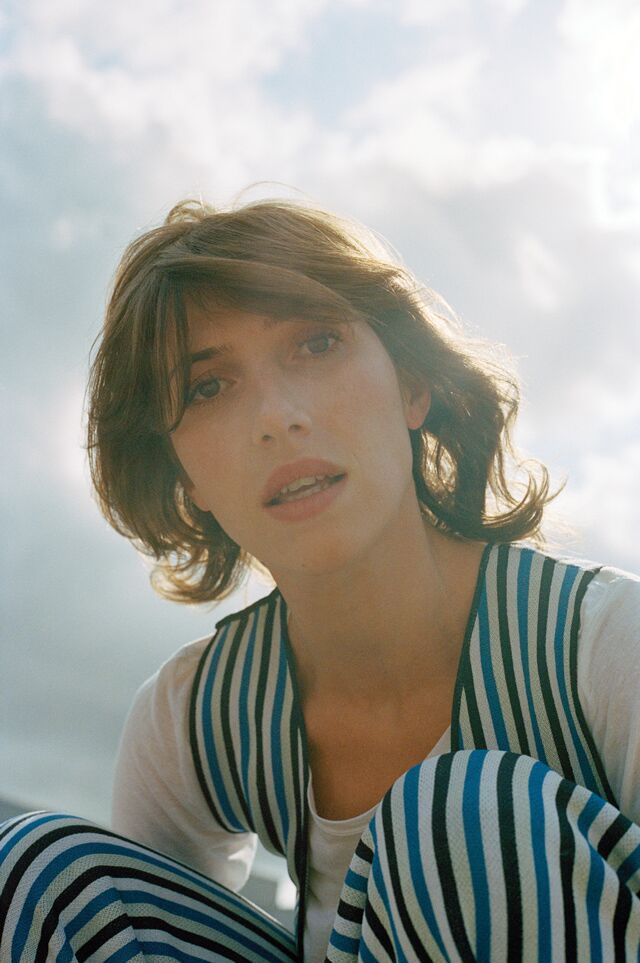 “Did you know it’ll be my first show in over a year?”

I’m on the phone with Aldous Harding, who comes across not unlike the music she makes - tough, but tender, slightly mysterious, with a dry sense of humor to boot. If there were any start of tour jitters during her set at Rough Trade in Brooklyn on April 9, I was none the wiser. Her latest album, Designer, earned her a 5 boob review in our March/April issue (the highest amount one can earn). Listening to the album felt a bit like listening to Joni Mitchell leaving the cold of Canada for warm, sunny California - there’s a new lightness to her work, though Harding can somehow affect both the high-pitched girlishness of early Mitchell with her later husky register earned after years of smoking, sometimes even on the same song. But Harding herself is quick to ward off any comparisons: “I think one of my strengths is that I don’t compare myself to other people and what they’re doing, and that, ignorance is bliss, a sort of thing. It’s not that I’m afraid to see other people doing well or anything, I just want to focus on what I’m doing.” If a Mitchell reference seems passé (and it probably is), it might help to note that it’s one of few discernable references that I can even make to contextualize the wonderful world of Aldous Harding. She has a physicality reminiscent of Kate Bush, a folky vulnerability in the tradition of Vashti Bunyan, but Aldous Harding is her own idiosyncratic artist. Read more below for her BUST interview.

I was wondering if you could talk about what the recording process was like, and if you had any new influences.

It’s funny, I don’t know how it all came together...I think that once I had written “The Barrel” and “Designer,” I kind of had more of a vision, once I saw the natural evolution of it all.

How do you feel about touring?

At the risk of sounding like I have some sort of personality disorder, I really don’t know who’s gonna show up. It’s like that Mike Tyson quote: “Everyone’s got a plan until they get punched in the mouth.” So I have a plan, and the plan is to play well, and with panache, and do my job, and try to enjoy it…

I really love your music videos. When you’re making music, do you ever think of things in a visual way, or do those ideas come to you later when you’re creating your videos?

The concept usually comes after. I can’t think of any case where I’ve done both at the same time. "The Barrel" was meant to just be a really simple [video]...I kind of feel like they’re a dying breed so I do my best to...not make it special, but make it its own thing. I was surprised that people reacted so—I guess that’s a good thing, I suppose it works.

Your videos have a lot of physicality to them. Is that something we can expect to see in your shows?

I try to do the same thing with the videos that I do with the music. It is very specific, it’s not complicated, but it’s how you do it, and where you reveal your tricks, and how you reveal them. Anyone can play my music, but it’s a lot about waiting, having patience and working for that release, and being okay with not getting it sometimes. The physicality is very much a part of what I do as a performer, but I try not to rely on anything...because the tricks change, depending on how I feel. Because it’s performance, and one thought can affect your entire body.

You have to feel out the crowd.

I try to find a balance between listening and projecting. So I’m not just playing, I’m listening as well. I’m not trying to do some “Colors of the Wind” shit here, but if I listen, I know what to do. Or I feel like I know what to do, and it’s a very specific intuition.

Are there any current musicians you’re listening to these days? Are there any contemporaries that you’re particularly inspired by?

I love Joan as Police Woman. I think she’s incredible. Though to be honest, I don’t listen to a lot of new music at the minute, because I get very inward when I’m creating. I’m not one of the people who seeks out new music. I don’t really nerd out the same way. I’m not a new music hunter like that. I’m still working through the back catalog and going through there.

The back catalog of older musicians?

Well, I support new musicians that I like, that I meet, but apart from letting the label release my music, I don’t really push that either, you either wanna find it or you don’t. And I’m not as interested in finding new music at this time, because I’m making it.

Designer is out now from 4AD Records. Top photo by Clare Shilland.

Tags: Aldous Harding , Designer , interview , music , 4AD , Aldous Harding
Support Feminist Media!
During these troubling political times, independent feminist media is more vital than ever. If our bold, uncensored reporting on women’s issues is important to you, please consider making a donation of $5, $25, $50, or whatever you can afford, to protect and sustain BUST.com.
Thanks so much—we can’t spell BUST without U.