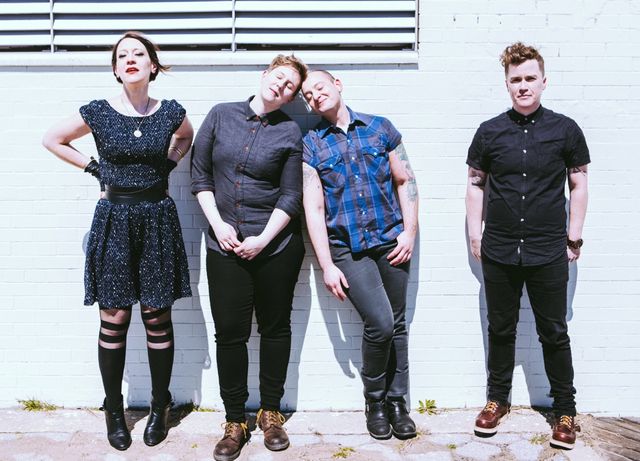 Passover starts tonight, and you can kick off the celebrations like The Shondes do in their music video for “True North,” from the band’s 2016 album, Brighton. Formed in 2006 by best friends Louisa Rachel Solomon and Elijah Oberman, the Brooklyn-based feminist rock band are known for their gritty, riot grrrl sound, Jewish influences, and political activism.

The video smoothly weaves themes of peace, liberation, acceptance, and identity with Passover traditions. Shots of the band (featuring Solomon on vocals/bass, Oberman on violin, Courtney Robbins on guitar, and Alex Smith on drums) performing and preparing for Passover Seder are interspersed among sequences of people writing and displaying affirmations advocating for unity. 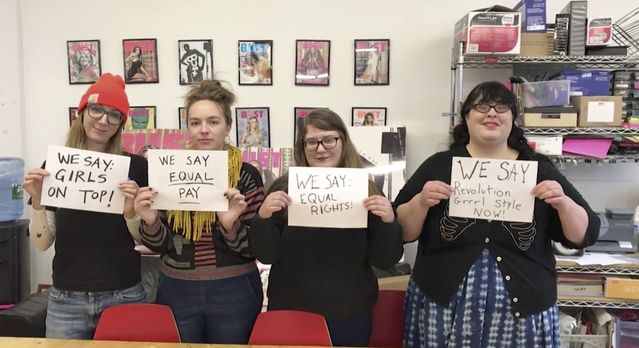 Soloman told Jewcy.com, “We wanted to write a simple pop song about being at a point in life where our ideals had taken a lot of blows, and yet, the act of imagining (a brighter future, justice, revolution, the mythical messianic ‘Jerusalem’ Jews evoke at Passover) itself could provide a kind of groundedness in conviction.”

The Shondes (rhymes with “Hondas” and Yiddish for “shames” or “disgraces”) have been outspoken as “firm opponents of Israeli policy” and advocates for peace between Israel and Palestine, reports Jewcy.com. Such complex topics take center stage in “True North,” where Solomon’s cries, “When we say ‘next year in Jerusalem’ / We say ‘every day is revolution’ / We raise the torch, we face true North.” Solomon’s lyrics like “I made this choice: fuck that noise (Don’t destroy yourself) / fuck that noise (Don’t let them destroy what you’re about.)”

"True North" was directed by Nicole Solomon of 4MILECIRCUS. You can listen to The Shondes 2016 album, Brighton, on Bandcamp and Spotify. Happy Passover!

Photos and video courtsey of The Shondes

Tags: The Shondes , feminist , rock back , riot grrrl , Jewish , tradition , activism , peace , feminist , music , feminism, , music video
Support Feminist Media!
During these troubling political times, independent feminist media is more vital than ever. If our bold, uncensored reporting on women’s issues is important to you, please consider making a donation of $5, $25, $50, or whatever you can afford, to protect and sustain BUST.com.
Thanks so much—we can’t spell BUST without U.