They say that there is nothing new under the sun. But, they, surely had not heard of Taali yet. Taali, the singer-songwriter-producer is nothing short of refreshing. Having written for other pop singers in Los Angeles, Taali is here, delivering her debut album, “I Am Here” with a polished sound all her own: Contemporary Jewish Pop. Full of thoughtfulness, genuine intentions, powerful imagery, and airy harmonies, the 15-track album, is proof that Taali and her much needed positivity, are here to stay.

Below, Taali opened up with BUST about her evolution, her Jewish lineage’s impact on her sound, and pomegranates.

At some point, you transitioned from your birth name, Talia to your stage name, Taali, what’s the story behind that?

I used to go by my name, so when I went on my first tour singing background for my partner, José James in Germany and Holland, I just didn’t want to explain the meaning of my last name for a while. But when it came to this music, this album, I felt I needed something more personal and also something inherently slight separate from myself. So Taali is what my family calls me, since I was a kid. I felt that sort of gentle heart feeling that I get when I hear that name, with this music—which is so honest and lineage based. So we switched. We just moved the a from Talia to the middle of Taali. And it’s Hebrew and Hebrew works on a root system.

It's interesting you said "root," I notice in a lot of your music, the songs are rooted in purpose. There are a lot of statements: the album is called I Am Here, the first single “Hear You Now,” why is it so important to make such bold, definitive statements?

So, I’m 30-years-old and I’ve been making music my whole life. And this is my debut album, right? Why do you hear the gravity in those lyrics? And I thank you for hearing them. It took me over a decade to be able to speak in clear, strong, final, but still creative terms and that is an essential part of my life now. I speak less but I speak with more purpose. The album is called I Am Here because I felt so clearly that I finally got to a place where I could say “I am here.” I had been making art for a long time and I had a career and a good one singing background and writing songs for other people, but this is the first time I can definitively say ‘No, I am here.’ And there’s a line in the song on the album called “Hope On My Own” and I say ‘I am through with fighting’ that is the first line of the song. I truly feel that way. The clarity of the album comes from me sort of laying down my arms and being free for once… It’s a beautiful thing.”

It is! Especially because, there is the weird thing that Millennials are battling, that if you're not where you think you're supposed to be by like your early/mid 20s, then that’s it, life is over. But this album doesn't feel like that.

I spent a lot of time feeling like I wasn’t going in the right direction and seeing people around me take off for reasons which wouldn’t quite work for me. But when I was in my 20s I had a lot of managers in a lot of people feel like I should be packaging myself and none of them really worked for me. So as a result I was never really that 23-year-old star that they wanted me to be and I’m so thankful for that because this album is profoundly grown [hearty laugh]. But it’s still pop.

It is still pop! Can you explain to me what is Jewish Contemporary Pop?

I’m a Jewish woman. I grew up and a very progressive Jewish home--good Jewish New Yorkers. So for me this album is part of that lineage. And a lot of people don’t know, but there is a lot of Jewish music, and this is something I really care about. There are Ethiopian Jews, Mizrahi Jews, Sephardic Jews, and Jews all over the world, but by and large I grew up with Ashkenazi Jew music; its very mournful almost, but to me more complex with minor chords and lots of lifted voices and clapping and body music because a lot of religious Jewish ceremonies aren't allowed to have instruments. I grew up with lots of body noise, a lot of noises that we had to make… So Jewish Contemporary Pop music, my music, is rooted in that harmonically historic experience of Jews. And lyrically I feel I honor them there. And the Pop music is where I come in, 2019, contemporary sounds and I love that because I know as far as I know I haven’t heard any other albums like this and it’s not sort of world music, it’s not that or religious Jewish music but it’s clearly Jewish music.

There is an lineage story in an interlude featuring your grandmother about your great, great grandmother, that you had never heard before, why was it so important to include that in the album?

To me it brings me back and gives me the strength that I’m sort of searching for at the beginning of the album. The song "Right-Size" is all about lineage and pulling and holding onto the strength of your ancestors and in my case I really do feel their strength. And also I was writing this album very much so about my my female experience and it is so distinctly female. So I wanted to call and speak to the women in my life that shaped me. So my Savta, she’s a survivor and a fighter. And that’s one of the beautiful things about Jewish culture. That is spoken through generations when there is so much violence that’s the only way you keep stories alive, by telling each other. But somehow that story had missed me. So that idea of lineage and passing down stories and healing through the telling of stories to me was essential. But, it’s the answer to the question of the first interlude. That powerful woman, with all of that love and loyalty, she’s with me. I have her blood. And I wanted to put that in the end to remind myself.

Earlier you mentioned amplifying voices other than your own. The “Hear You Now” video is so beautiful and inclusive and it feels intentional, but not forced. It just seemed like you knew all these women and included them in the video.

That was the case [laughter]. The concept of “Hear Me Now,” was about me beginning to address considerable trauma that I have. And I didn’t feel comfortable speaking about it in a literal sense, but the song is about me preparing myself to even start to speak about it. So we decided to feature these power curly-haired women from my life and I wanted them to play symbolic guardian angels. There supposed to be sort of the people around you that show you the way, through their actions, words, or power of example. All those women are spectacular artists in their own right. And I did want to include curls, because curls are such a large part of my ethnic identity. And I only just recently learned how to love it. In the back of my mind I hard this dream, that we would use all these curly-haired women in the video and make the video I dreamt of as a kid.

On a lighter note, what food best represents your music? And why?

I might have to come back to you on that, but whatever it is, might probably include pomegranate. Part of it is close to Jewish iconography as you can get, but also, it’s my true favorite fruit. I just love the complexity of the flavor, and also the color; it’s so vibrant. Probably something like a salad with pomegranates and herbs... [laughs] 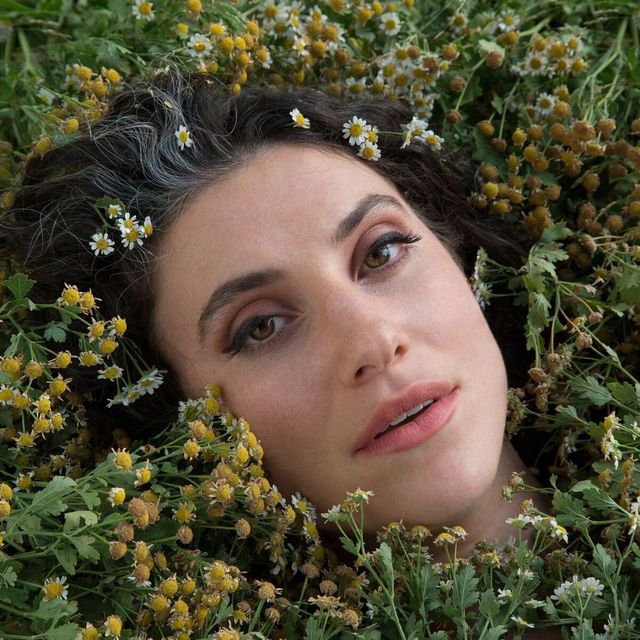 I Am Here available now!