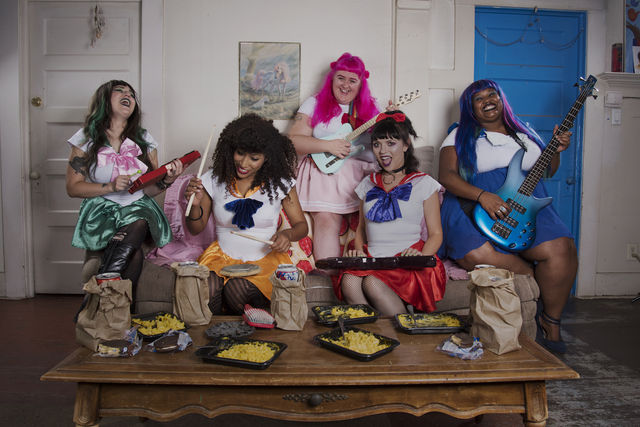 You enter the crumb-laden church of Fatty Cakes and the Puff Pastries ready to laugh, cry, and maybe even catch a flying slice of pizza with your mouth. Kathleen Hanna knew that to witness Fatty Cakes live was to unofficially join their ravenous ranks—to be reborn, covered in a fine dust of powdered sugar (or, depending on the mood, parmesan).

Alice Bag of pioneering LA punk band the Bags felt the hunger pangs, too, swiftly jumping into the role of producer and “fairy punk mother” about a year after befriending the Fresno-based group. Sure, Bag made the gals give up dairy in the interest of a clear vocal performance (notably the hardest two weeks of their lives) but the result—their 12-song, pink, taffy-colored, self-titled LP, released November 2018 on Emotional Response Records—was well worth the sacrifice.

While not yet “mainstream,” the grrrl gang is beloved in Los Angeles and Bay Area underground circles for their zany stage antics (read: life-size ice cream cones, synchronized dance moves, boisterous sing-alongs). Their experimental punk sound is made whimsical with the otherworldly addition of glockenspiel, electric uke, and QChord.

Queer, femme, fat, and racially diverse, these are five fully formed feminists gleefully bashing against the status quo with drumsticks, bass guitar—really, anything covered in sprinkles or glitter. Their previous EP releases, although less polished, reveal the group's inner workings: sure, they want to smash the patriarchy, but they're also into singing about pizza girlfriends, bratty stepmoms, mermaid crushes, AOL instant messenger friendships, and alien babes.

The Puffs have grown exponentially since 2011, evolving from Amber “Fatty Cakes” Fargano's fat-positive solo act. The songwriter says she was “a fat kid, and it sucked,” so she turned to other worlds (Pee Wee's Playhouse and the B-52s) for relief. When Fargano found the fat liberation movement, songs poured out.

“Fresno is one of the poorest cities in America with a very clear glass ceiling, but I wanted my dreams to come true. I knew it wasn't going to be easy. I was constantly being told, even by members of my own family, that I was not deserving of love; that I'd never find a husband,” she says with a laugh.

The Puffs laugh a lot, mostly for the joy of it, but sometimes, I suspect, to keep morale up. Although Fresno is a diverse city, Fargano says that it's home to a staunchly conservative population. The artist found creative allies in the thriving DIY art scene, and the band is always quick to say that they are proud to be from Fresno.

Raised and inspired by a strong, supportive single mother and brassy grandmother “who scandalously donned shorts in the 1930s and had a few husbands,” Fargano serves as the matriarch of her own Puff family. The tribe grew to include Staci McDowell (backing vocals/QChord), Vishinna Turner (bass/backing vocals/crafting duty), and Victoria Crow (backing vocals/glockenspiel) in 2012. Drummer Audrey Johnson, the only classically trained musician of the band, joined in 2013, giving a rock beat to the Puff's theatrical queercore.

This is is no Candy Land, however. The road has not always been paved with frosting. Last year, the gang was still without a record label to release their new album. They'd written and recorded a slew of new songs with Bag's encouragement, dealt with anxiety (see their "Panic Attack" music video), banished web trolls and haters in their own Fresno scene, and managed to gig when not working 9 to 5 jobs (several of the Puffs work retail at the same mall). Still, Bag believed in the Church of Fatty Cakes, as did Hanna, who, after seeing the band play in Echo Park last spring, said that all they had to do to gain more momentum was to keep playing live.

Yes, their live performance is magic. When I caught up with the Puffs in January 2019 at the femme-fronted Oakland Pop Fest, the band had just graced the November cover of Maximum Rock'n'Roll, causing hardcore dudes to lose their minds on the internet. Far from rock stars, the friends joked around as if they had traveled to the Ivy Room to simply hang out. Fargano ate a bomb burrito, a “splurge” in comparison to her bandmates' more economical Subway sandwiches (her verdict: worth it).

Onstage, each Puff transforms into her own empowered comic book character: Johnson pummeling the drums relentlessly, her unruly mane floating above a perpetual sneer; Turner thumping a steady groove on the bass; Fargano, in her frilly pink dress and pointy, clown-like hat—commanding the room with her mighty electric ukulele plugged into a Big Muff distortion pedal.

With her BFFs on backup vocal duties, the front woman serenades, screams, and even burps (“isn’t the belch appropriate?” she bellows). The frenzied crowd is hungry and not afraid to show it. Fatty Cakes and the Puff Pastries is taking up space, so somehow, we all can.

“Witch, witch, you're a witch!” we chant along with the band, while McDowell and Crow perform a snottier version of a Supremes dance routine. The QChord and glockenspiel add an unsettling childlike charm to the music—the differed dreams of little girls returning to claim their power.

Victoria Crow, a former high school choir singer and self-proclaimed “goth cheerleader reject,” is known to pass out slices of pizza during “Pizza Girlfriend,” a gesture of goodwill. “Sometimes in this world, all you have is your best friends and allies. I'm touched to know that other people are inspired by our message, and that they can feel safe for a moment, at our show,” she says.

Before becoming a Puff, Staci McDowell's biggest musical accomplishment was learning Titanic's “My Heart Will Go On” on clarinet back in junior high. “I had always wanted to be a Spice Girl; so I loved the choreography, dance moves, and oohs and ahhs of the band,” she says. “Learning the QChord in a supportive environment, and being in a band where we can express our genuine, true feelings—I love that; and I love being the wacky ones up front.”

Although McDowell recognizes the struggle (“as women in music, people are going to have a lot of opinions, and you're going to hear all of them”), she's got her gang. "When writing the song 'BFF,' Amber had us each pick a band member's name randomly and we all wrote nice things about each other,” McDowell says, sniffling. “I'm going to cry just talking about it. The harmonies are just so beautiful.”

Audrey Johnson, who makes her living as a drummer, just returned from a German tour with Omar Rodriguez Lopez of the Mars Volta; plus, she plays in the black femme group Squid Ink, among too many others. Growing up, her grandfather sang songs in Spanish. “When he was dying, he lost his memory, and when it got really bad, I brought the guitar over and played 'Angel Baby,' the first song he taught me, on guitar. All of a sudden, my skinny old sickly grandpa began to mimic me strumming the guitar. A tear fell down his cheek. That was complete proof to me that music is something extraordinary,” Johnson says. 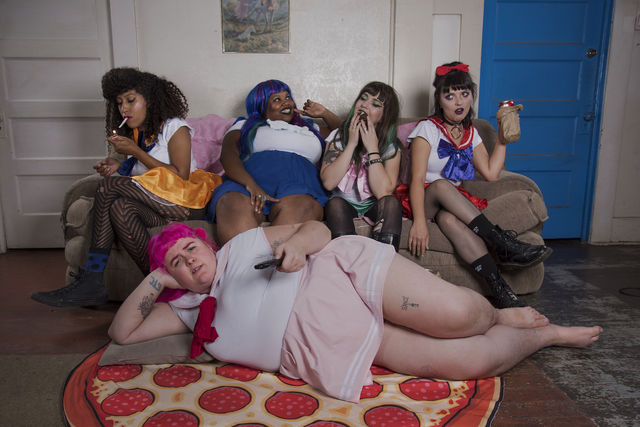 Her grandpa would no doubt be proud of the new Fatty Cakes record, despite the cuss words. “This band is so special because it's our therapy, our safe space,” Johnson says. “We group text each other sweet things and remind each other how much we all love each other. Then we get together, eat snacks, and rock out.”

Vishinna Turner was given a bass by her father, taught herself Bratmobile and Bikini Kill songs, and played in a slew of riot grrrl-influenced bands, although her first loves were Sade and Mary J. Blige. Many of the Puff's roots spring forth from Turner's fertile, melodic bass lines. When the band rolls into “Internet Bitch” live, Turner's fingers become a blur, her eyes wild.

“Silencing black women is systemic. Assuming that we’re strong enough to deal with oppression, thus we need no support, is the absolute norm. But during 'Internet Bitch,' I get to yell, scream and joke about how absurd that is,” she says. “It’s therapeutic and it really helps me move past those experiences where I wasn’t heard.”

Not being heard, not being seen—this might be what inspired Fatty Cakes and the Puff Pastries. But now, their vision is laser-focused. Crow might have said it best—delivering a searing truth between giggles (spoken like a true Puff). “We are a threat, and we are here. We're not going anywhere,” she says. “You might not want to see us, but we see each other. That's what truly matters.”

Absolute Swoon: Looking Back At K.D. Lang And The Reclines' “Absolute Torch And Twang” On Its 30th Anniversary