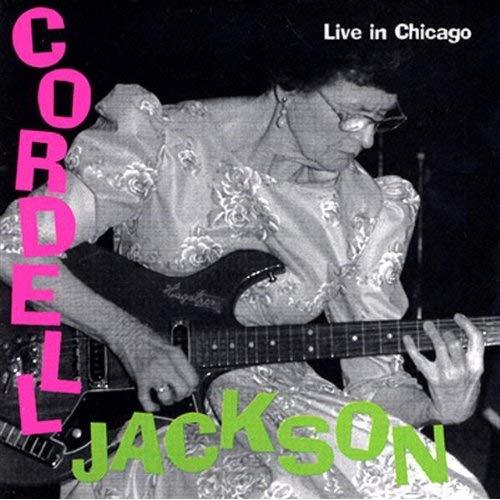 She was a lean, mean, rock'n'roll machine, and her name was Cordell Jackson (aka "the rock'n'roll granny").

Jackson is likely among the greatest female rock pioneers you’ve never heard of. Many believe her to be the first female rock musician to take full creative control by writing and engineering her music on her own record label, Moon Records, which she started in 1956. Yet, like many women ahead of their time, details of Jackson’s life are hard to come by, relgated to niche corners of the internet and a handful of YouTube videos. In a 1990 interview with United Press International, the then-67-year-old Jackson spoke about the ways sexism worked against her throughout her career. “I've had a lifetime of hearing adults say, 'Little girls don't play the guitar,' but they do,” she said.

Jackson’s playing consistently garnered comparisons to legendary musicians like Elvis Presley and Jimi Hendrix, but Jackson, who was respectively 12 and 19 years their senior, denied they inspired her. Rather, she insisted, she beat them to the punch, honing her own sound before they were old enough to hold a guitar, much less play one. In a 1992 interview with Tulsa World, she left little room for debate, stating, “If what I'm doing now is rock 'n' roll or rockabilly or whatever, then I was doing it when Elvis was a one-year-old. That's just a fact.”

Born in 1923, Cordell Jackson's life began before most watershed moments in rock history. The electric guitar wasn’t invented until 1931, and rockabilly, the country-rooted rock that Jackson would one day become famous for, didn’t gain popularity until the 1950s. Growing up in the '30s and '40s, Jackson had a strong musical education, which meant her artistic development began earlier than most. Her father played fiddle in a string band called the Pontotoc Ridge Runners and let the then-teenaged Jackson play with them. “I was raised on the classics of all kinds of music,” Jackson told Tulsa World. “I knew what a fine instrument was and what it was supposed to sound like. And what good musicians were supposed to play.” This early exposure to music clearly paid off. Jackson learned to play everything from guitar to mandolin, piano, harmonica, and the banjo, using those skills to create an equally diverse discography. She claimed to have written at least 400 songs, which ran the gamut in genre from jazz to reggae.

As a young adult, Jackson pursued her love of music by joining the Fisher Aircraft Band in 1943, after she graduated high school. She made her first forays into songwriting in the late '40s. By the time she hit the limelight later in life, she defied categorization as an artist. With an electric guitar strung across a silky ball gown, her outfits alone represented the seemingly contradictory “rock'n'roll” and “granny” sides of her personality. On the one hand, she was a devoted Southern church lady who urged younger artists to keep their lyrics clean, but, on the other, she believed that rock'n'roll was “the happiest music” and wasn’t afraid to shred her guitar with abandon. In a 1991 interview with the Christian Science Monitor, Jackson described the ethos at the core of her playing, stating, "Makin' mistakes doesn't bother me at all. The people in the audience enrich me, so I enrich them. I just give my love, my total self. If they get my mistakes, they get all of it." Ironically, Jackson’s unfiltered self-presentation is what allowed her to become a generational crossover.

While video may have killed many a radio star, it did the exact opposite for Jackson. Despite her 40+ years of experience writing and recording songs, Jackson wasn’t widely known until the late '80s and early '90s, when she gained young people’s attention when a music video for her surf-rock hit “The Split" was featured on MTV. She also starred in a Budweiser commercial in which she out-riffs Brian Setzer, lead guitarist and vocalist for the rockabilly group the Stray Cats. These videos catapulted her to a new level of fame, and she embraced the nickname of "the rock'n'roll granny."

Discussing the Budwieser commercial with Tulsa World, Budweiser marketing executive Tim Schoen offered up a theory as to why the public was so universally taken with Jackson, saying, "She's authentic—a real, 68-year-old rock 'n' roller, and they love it." Evoking this feeling of authenticity and novelty was arguably Jackson’s plan all along, with the unlikelihood of her stardom fueling her fire to continue. “If I have seen something done, I don't want to do it,” she told Tulsa World in 1991. “I want to do things nobody else has conceived. It's a matter of nerve.”

Jackson passed away in 2004 at 81 years old. Despite being often overlooked in rock'n'roll history, the pieces of her work that are accessible to the public have immortalized her message that being your authentic self, at any age, can transcend social restrictions. You just have to go for it.