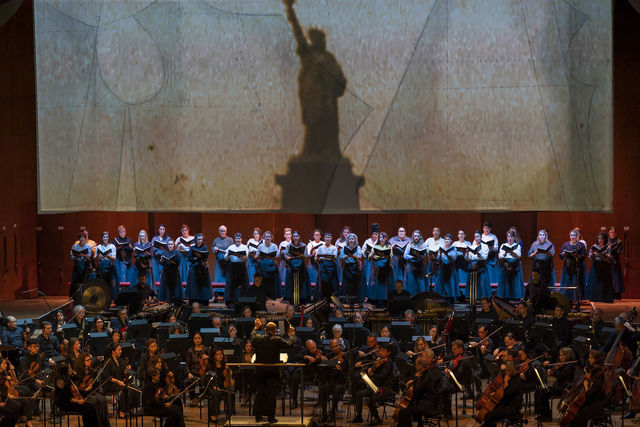 “Times evolve or change,” Julia Wolfe, composer of the recently premiered oratorio Fire in my mouth, inspired by the Triangle Shirtwaist Factory fire, says. “The piece changes, as with all forms of art; we bring not only the history, but where we are now. That’s part of the dynamic: how do these things resonate back and forth?” Considering the perils many immigrant woman are facing in America today, her piece could not have come at a better time.

Wolfe seems to be attuned to the zeitgeist, especially when it comes to labor history and its impact on our modern life. Just a few years after Wolfe’s Pulitzer Prize-winning oratorio about Pennsylvania coal miners, Anthracite Fields, premiered, then-presidential candidate Donald Trump promised to bring coal back to the region, causing many discussions on the social and environmental implications of mining on both sides of the political aisle. And now Wolfe has done it again with Fire in my mouth, an oratorio that was commissioned by the New York Philharmonic. Fire in my mouth explores the tragic deaths of 146 (mostly) immigrant (mostly) women garment workers during the Triangle Shirtwaist Fire on New York's Lower East Side in 1911. This piece comes at a time when the question of immigrants' welfare and status is once again front and center. In fact, Fire in my mouth premiered on January 24th, at the end of a United States government shutdown with immigration reform at its center. In the case of many of her subjects, Wolfe chooses to show that history really does repeat itself.

The Triangle Shirtwaist Factory fire, which took place on March 25th, 1911, is still the deadliest single fire in New York City history. The majority of its victims were Jewish and Italian immigrant women who worked nine hours a day during the week and seven hours on Saturdays, under cramped and often dirty conditions. “The immigration issues were really bad then. They didn’t want these Italians and Jews, these other people, 'short and dark' is what they were called. They just did not want them here,” Wolfe tells BUST. 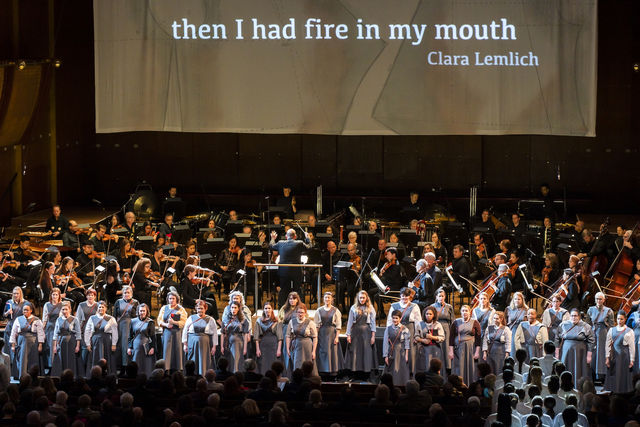 Many of these women came to America with nothing more than their high hopes for a brighter future, as we see in the lyrics of the first movement of Fire in my mouth, “Immigration": “We came without passports or anything/we took a boat,/a big beautiful boat/and we went off.” These hopeful immigrant women would find themselves on New York’s Lower East Side, where they would work very long and very hard at a factory where a fire would ultimately claim the lives of 146 of them.

But Fire in my mouth does not only explore the deaths of the young immigrant women who perished in the fire; it also celebrates their passion and their lives. “This piece is about that community of women,” Wolfe says. “Young, immigrant women; they were self educated, knowledgeable, they read, they articulated the issues, organizing and believing in something and coming together.” She highlights women like Clara Lemlick and Rose Schneiderman, who protested against the horrendous working conditions faced by the Triangle Shirtwaist Factory workers, as well as other men and women working in sweatshops.

Fire in my mouth is a collaboration of many talented people. Wolfe’s score is combined with the efforts of two choirs that, at various points, hold up scissors to aggressively portray the women’s professions. A woman’s chorus called the Crossing is directed by Donald Nally, and girls from the Young People’s Chorus of New York City, led by Francisco Nunez, lend their voices. There are 146 voices, to be exact—one for each victim of the Triangle Shirtwaist Factory fire. Wolfe also worked with the video and scenic designer Jeff Sugg and director Anne Kauffman to complete the visual elements of the piece, such as when images from the ships that carried young immigrants to America at the turn of the twentieth century are shown over a clear sewing pattern. “The story is just beginning; we don’t need to see much, just ocean, diagrams of the boat. The ocean, if you’re on this boat all you would have seen is ocean for days and days,” Wolfe says. 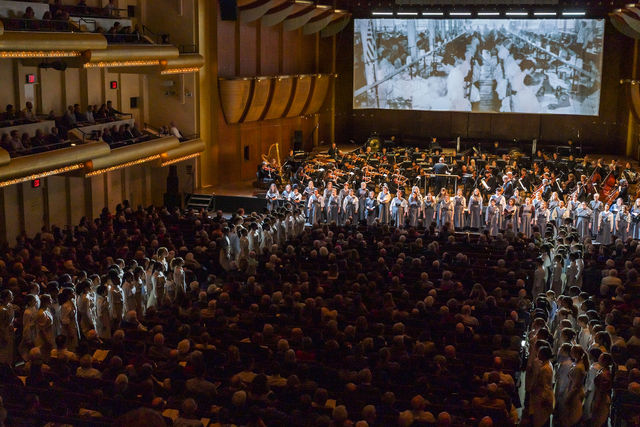 Throughout the piece, there is a sense of authenticity with each image shown. These images complement and add to the dramatic tension of the entire piece. There are images of the Triangle Factory itself; many of the women who worked at the Triangle Shirtwaist Factory just before the fire are pictured in their neat white work shirts, their hair done up professionally in the style of the time. The women in these pictures look out hopefully. It is an eerie thought to see some of the fire’s victims shown so clearly in vivid pictures before the fateful fourth movement, titled “Fire.”

The music is haunting at times, and incredibly visceral. The score itself has a sense of foreboding as we move from the first movement, “Immigration,” to “Factory,” where the sense of hope these young women may have had gives way to a new, more practical reality. The oratorio then shifts into the third movement, “Protest,” the longest and most hopeful movement. In "Protest," the words of Clara Lemlich, a woman who protested the conditions of sweatshops like the Triangle Factory in 1909 (and later lost a cousin in the fire), ring out: “I want to say a few words. I am a working girl. One who is striking against intolerable conditions.” The oraratorio concludes with “Fire,” the final, haunting movement that ends with the singing of the names of all 146 victims of the Triangle Fire.

“These people were lost, their families lost them,” Wolfe says of her decision to include all the names. “The importance of including all of them as a memorial—they lost their lives because of this crazy situation, the negligence. These people were part of the protest.” 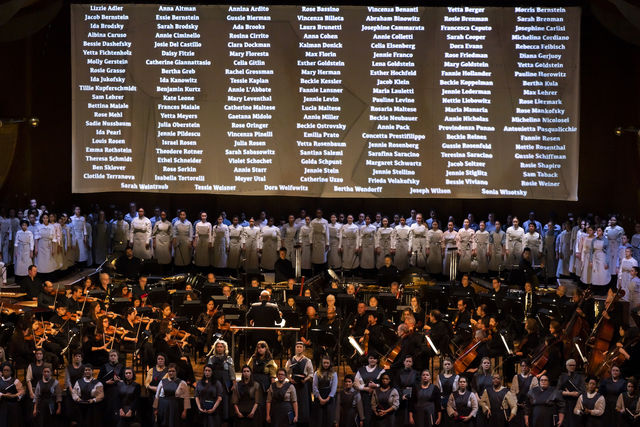 Fire in my mouth premiered in the midst of the longest government shutdown in the United States history, which began over a dispute over a wall at the U.S-Mexico boarder. It premiered at a time when many families looking to immigrate to the United States from poorer, unsafe countries are being separated. Mothers are being taken from their children just as they come to the United States seeking a better life. According to a study done by the National Institute of Heath, immigrant women still continue to work in industries with higher fatality rates than woman who were born in the United States. They take on the more dangerous jobs, even as they are afforded  much less protection in the workplace. Immigrant women must work these riskier jobs because they have fewer options. They do not always speak the language of those doing the hiring, many come to this country with very little, and so they must take what jobs they can get. Some women simply do not have the connections or skills necessarily to hunt for a better job before bills must be paid and mouths must be fed.

Though their home countries may be different, immigrant women still come to America not speaking much English. Just like the Italian immigrants and Eastern European Jews who came to American over a century ago, these women come speaking foreign languages in accents that are easy to define as "other." This makes it harder for them to find work. Many immigrant women today work in the "gray economy," working for cash and in places where they are more likely to be taken advantage of. Wolfe, who did extensive research on the Triangle fire and the treatment of garment workers during that time period, says that things have gotten better and we can’t forget that—but still, immigrant women are too close to the front lines when it comes to workplace perils. 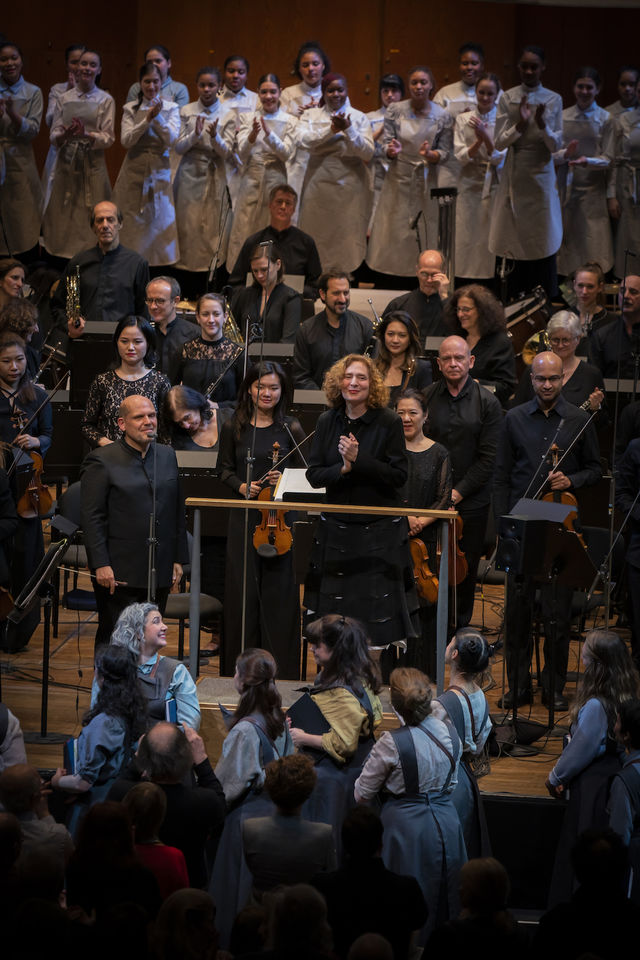 Fire in my mouth resonates just as loudly today as it would have a century ago. As immigrant women continue to struggle to earn as much as American citizens born in the US; as some of them are taken from their children at the border, and others worry that they might lose their status as residents in an increasingly cold political climate, it is important to see history for what it is. It is important to understand that sometimes history does repeat itself. As Wolfe says herself, “The piece is about that community of women. Young immigrant women…believing in something and coming together.”

Works such as Fire in my mouth have the power to bring the plight of not only garment workers of the past but immigrants of today to the forefront, so that we may see more clearly where we came from as far as labor history is concerned, and also how we might do better.