A Goodbye To Debi Martini of the Red Aunts 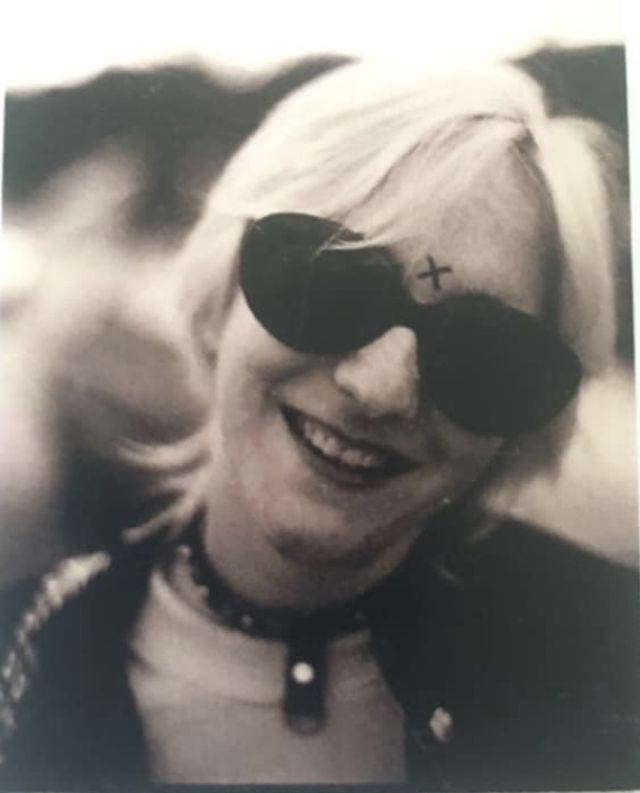 Picture this: A clear summer evening in NYC, 2001. While the city was already dying, it wasn’t yet the bloated corpse it is today. The Odessa, then, was still in full form—half dive bar, half cheap diner. It was the perfect place to "catch up" and "act out" with friends over inexpensive food and drinks. This is exactly what I am doing there with none other than Debi Martini, aka "Connie Champagne," aka the baddest bitch in the land. Anyone who has had the pleasure of rockin' out to her music, or the privilege of basking in her radiant presence, would agree. A bonafide rock goddess, my teenage heroine, and although this is only the third time we've ever hung out, already my fast, fast friend.

Mz. Martini was the bass player and oftentime vocalist/songwriter in (easily) one of the best bands of the '90s: the Red Aunts. Also featuring Kerry Davis (guitar/vocals), Terri Wahl (guitar/vocals), and Lesley Ishino (drums), the Red Aunts were a singular, unprecedented, and unparralleled contribution to the '90s pantheon of "all-girl punk rock." Indeed, the Red Aunts occupy sacred space in the canon of rock'n'roll, period. They sounded like no other band at the time. Blending Southern Gothic horror, garage, and Delta blues with razor-sharp, angular, mood-shifting art punk, they were unhinged and dangerous, light years ahead of their contemporaries.

It's a Sunday night in 1995, and I'm staying up late to watch MTV's 120 Minutes. Among all the great (and not-so-great) bands on that night, one video hits me like a kick in the face. "Freakathon," the lead single off the Red Aunts' new album, #1 Chicken. The four women in the band are all anonymous in their ski masks, and nothing seems more dangerous than them. 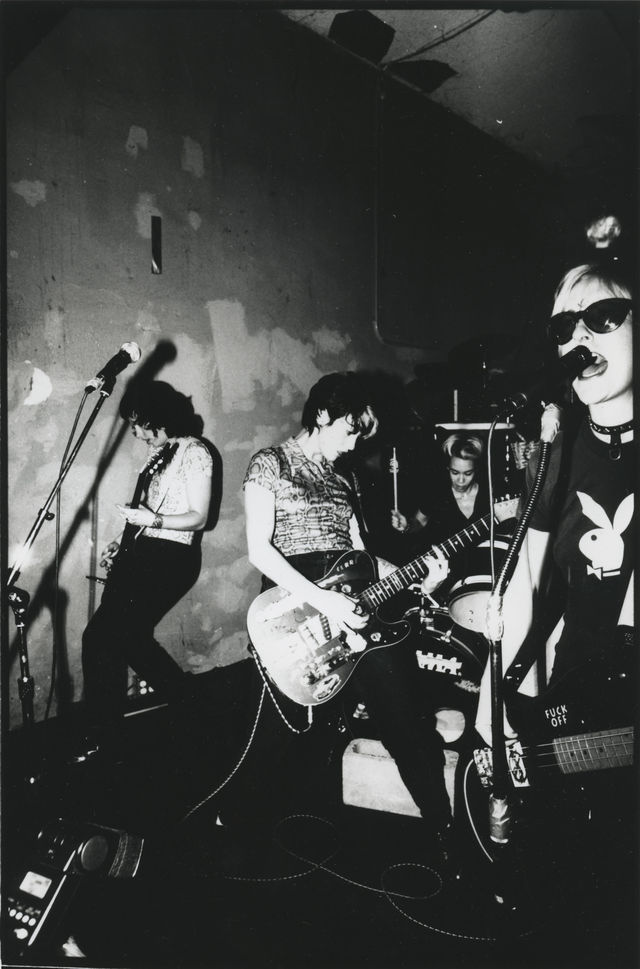 Kerry, Terri, Lesley, Debi. Photo by Danny Hole.
Cut to Brooklyn, New York, summer of 2017. After a hiatus of almost 20 years, the Red Aunts are finally reunited and onstage at Union Pool. My best friend and I are in the audience and absolutely enthralled. It's a teenage dream come true. We never got a chance to see them live in their heyday, but it is obvious that these amazing Amazons have not missed a single beat. In fact, Ishino's thunderous beat is as relentless as ever. On the frontline, Wahl's and Davis' dueling guitar riffs ricochet back and forth like bullets. But this is no cliché cock-rock pissing contest. Instead, the Red Aunts are a unified front battling the conventions of society and rock'n'roll. It's a full-on assault, and they are ruthless. Soaring above all this glorious noise is Martini's spitfire, primal screech, spraying through the audience like a fully automatic machine gun. The war is on, and the Red Aunts take no prisoners.

The audience is barely allowed to take a panting breath when Martini signals to her comrades onstage, and Wahl counts, "Okay, ladies, it's time to 'Smoke'—1, 2, 3,4!" The warriors all take aim and blast through 25 seconds of punk rock speed and ferocity. These ladies are smokin', indeed! Leading the charge and yelling at the top of her lungs, Wahl's lyrics sexually objectify some lucky "boy" under her female gaze: "The way you walk, swing those hips, c'mon over here boy, and let me take a sip of THAT!!" All the while, Martini has a cigarette lit and is standing at the edge of the stage, daring the audience. As quickly as it began, the song is over. The bomb has been dropped. The Red Aunts just kicked our asses. The happily defeated audience agrees...duh, no contest. 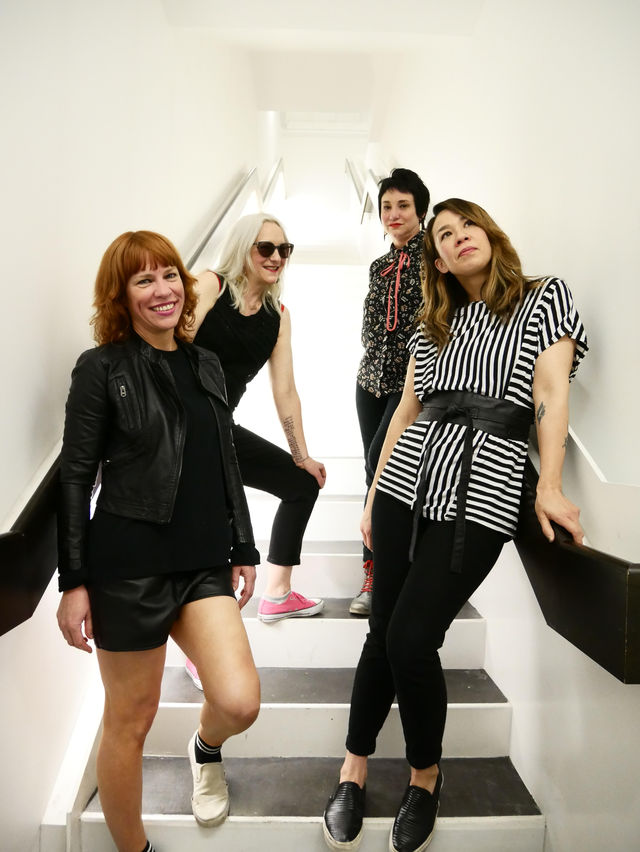 It's winter, January, 17, 2019 and I can't seem to get myself out of bed. While this is a common occurence, something about this day seems worse than others. I reach for my phone and see a text message from my best friend, telling me to call him, because he has something important to tell me. I know this can't be good. I call him while I'm freezing on my front steps, smoking my first cigarette of the day. Through half-supressed sobs he informs me, "Debi died today...Debi Martini..she just died, Papa.." I'm shocked and utterly devastated. Such a strange mourning. At once, I feel the huge hole in my heart;,as well as the huge hole left in the world. The painful loss of a dear friend, as well as the loss of a rock god, a global treasure. It's an intimate sense of loss when rock'n'roll heroes die, and it's even more intimate when the hero is also a friend.

We've all been robbed of a brilliant luminary...and such a character! In a world lousy with superficial, phoney, social media profiles, Debi Martini presented a fully actualized, ideal version of herself—in real, walking, talking flesh. In a boring world where there are few true characters left, losing Debi is an especially cruel blow. Always sharply dressed, her style and glamour came across as a weapon. Behind red-tinted glasses, her laser-sharp stare could cut anyone down and make them flee. She could also soften her gaze to a warm and loving glow, making YOU feel like the superstar.. though you were merely reflecting her light.

January 21, 2019, and I'm smoking a cigarette beneath the eclipse of a blood-red moon. Debi's voice is in my head, singing, "A cigarette, the moon, and all I need is you." Exactly, Debi, exactly. But as I stare up at the frigid night sky, I realize that the moon is merely reflecting that laser-red light coming straight from Debi Martini's tinted glasses. This is no blood moon, it's a RED AUNTS MOON. And Debi is still casting that loving glow over me. And now, the rest of the lyric follows: "All night long, don't wanna see the dawn!"

Tags: Debi Martini , the Red Aunts , music
Support Feminist Media!
During these troubling political times, independent feminist media is more vital than ever. If our bold, uncensored reporting on women’s issues is important to you, please consider making a donation of $5, $25, $50, or whatever you can afford, to protect and sustain BUST.com.
Thanks so much—we can’t spell BUST without U.