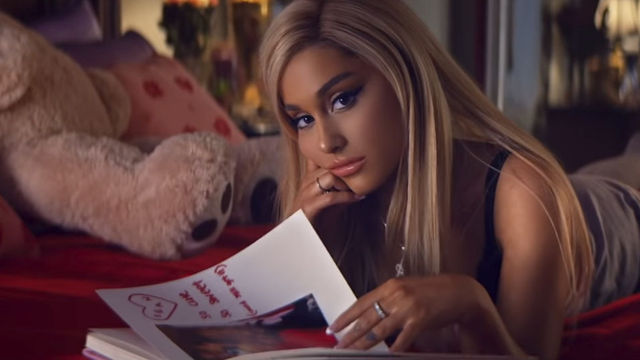 Ariana Grande paid tribute to four iconic teen movies in the music video for “thank u, next”—Mean Girls, Bring It On, 13 Going On 30, and Legally Blonde. Some critics have said that Grande is just trying to prey on our collective nostalgia for our teen years, or trying to make good gif fodder—that the video is just trying to go viral and doesn’t have deeper thematic meaning. And the video certainly has generated some very good gifs and engendered a strong sense of nostalgia. But the movies and the scenes she chose don’t strike me as random or unrelated to the theme of the song. All four movies are about their female protagonists learning to love and accept themselves. Although romance may be involved, what’s important is that the characters grow as people.

Take the first tribute, to Mean Girls. It’s interesting the Grande casts herself not as the movie’s heroine, Cady, but as its villain, Regina George. Regina has a particularly interesting arc through the movie—she begins the movie with a dreamy, enviable boyfriend (Aaron Samuels) but ends it having broken up with him. She starts out being the prettiest, the thinnest, the most popular, but ends it seemingly focused on just being happy. Regina learns that she doesn’t need to be the most beloved person or have the hottest boyfriend in school. She develops a better relationship with herself, finds an outlet for her aggression, and finds a new boyfriend. She learns to be better.

The next tribute is Bring It On, a movie about Torrance, a cheerleader who takes the reigns of her majority white high school cheerleading squad, but learns that the squad has been using cheers stolen from a nearby majority black high school cheerleading squad. Torrance starts the movie with an obnoxious boyfriend and a group of friends who all encourage her to take the easy path, use the stolen cheers, and not make waves. When she pushes back, her boyfriend tells her to be quiet and let someone else be captain, to just look cute and cheer. In a last attempt to inspire the squad, Torrance convinces them to get by on their own merit—to do their own work, make up their own routine, and try for the national cheerleading championship.

At the end, the squad loses the cheerleading championship to the squad they’d stolen cheers from, but they’re happy with second place, because they got by on their own merit. Torrance learns to have confidence in her own creativity and leadership skills, and breaks up with her terrible, terrible boyfriend, knowing that she deserves better. In the part featured in the music video, Grande recreates a scene where Torrance dances to a tape from a guy at school she’s falling for, with a song he wrote for her. Although the original tape is labeled “To Torrance, From Cliff,” Ariana labels her tape “To Ari, From Ari,” reinforcing that this song isn’t dedicated to a romantic interest, it’s dedicated to Ariana Grande, and is a way of showing love to herself. 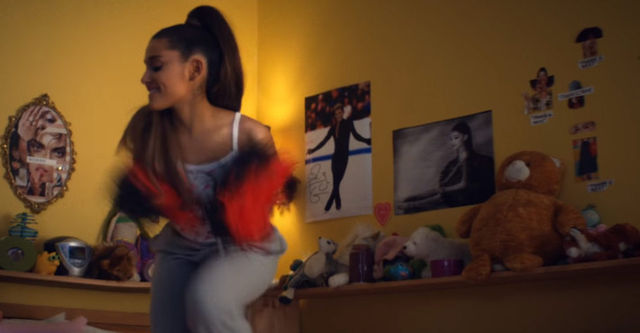 The next movie featured is 13 Going on 30, a movie about Jenna Rink, a 13-year-old who wishes to be 30 and wakes up one morning to discover that her wish has been granted, letting her skip over her awkward years and find herself popular and successful. However, despite getting what she wanted, Jenna learns that she sacrificed important friendships and became someone she didn’t like. Through the course of the movie, Jenna tries to repair her friendships and learn to be more confident in who she is. 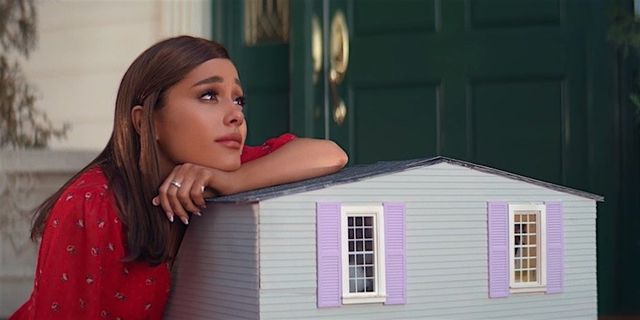 The “thank u, next” music video only briefly references 13 Going On 30, but pulls from one of its most touching scenes. Having done her best and healed her relationships, the guy Jenna loves still decides to marry someone else. Jenna walks away from her crush’s wedding, retreating to her porch to cry. It’s particularly touching that this scene is featured during the verse when Ariana imagines her own future wedding, hoping that it’ll be the beginning of a lifelong marriage, but knowing that things don’t always work out, even when you try your best. Still, the movie’s focus is on Jenna becoming a better person. Although she lost the guy she loves, she’s become someone better, kinder, and stronger. She knows exactly what she wants and isn’t apologetic about it. As a tear falls down Grande's face, the video transitions into the last movie tribute, to Legally Blonde. 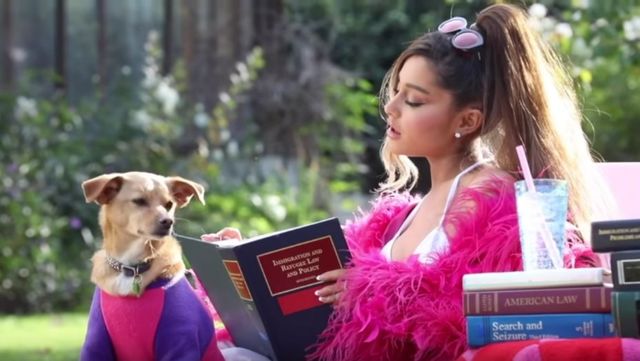 If 13 Going On 30 is a movie about a teenager learning that her childhood dreams and ambitions won’t satisfy her later, that childhood popularity eventually ceases to matter in the face of true and long-lasting relationships, then Legally Blonde is a movie about a grown woman learning that she doesn’t have to bury herself in her relationships—that she can be bigger and smarter and more ambitious than the men around her imagined her to be, or wanted her to be. Legally Blonde is about a woman, Elle, who thinks she’s on a journey to get her boyfriend back from the woman who "stole" him—but learns that actually, she’s on a journey to take herself back. We see Grande reenacting scenes in which Elle studies law books in a bikini and walks onto the Harvard campus with pink stilettos.

Though she doesn’t look like anyone else, Elle proves that she can be herself and be taken seriously, that she doesn’t have to sacrifice her personality to be smart and successful. Elle’s desire to win her boyfriend back fades when it becomes clear that he would never have been enough for Elle, would never have let her grow into her best self. Maybe he seemed like a good boyfriend to her in college, but the person she is now just doesn’t work with him anymore. Elle ends the movie with a bright future and a proposal from a new man who loves her for exactly who she is, who helped her get there. It’s easy to imagine that’s the future Grande wants for herself. Who doesn’t want that? But the important thing to focus on at the end of Legally Blonde isn’t that Elle got the guy who was right for her, it’s that she became more herself. Elle met someone else, (they’re having better discussions) and that someone isn’t her new boyfriend, it’s Elle. Which supports the whole thesis of Grande's song: loving someone else is great, but it’s just as romantic to fall in love with yourself.

But even setting aside the themes in the movies, the nostalgia we feel watching tributes these movies strikes me as thematically appropriate as well. Many of us grew up watching these movies. They have a special place in our heart because we learned to be ourselves from watching Cady Heron, Torrance Shipman, Jenna Rink, and Elle Woods. Much like past relationships, these movies taught us about ourselves—what we wanted, who we thought was cute, and how friendships and relationships should be negotiated. It’s nice to look back on them and think, “Wow, I loved that character when I was younger. I’m so glad I had them at that point in my life.” Grande's video is a tribute to becoming ourselves, learning our value, and trusting our strength, and that’s the most romantic sentiment I can think of.

21 Albums To Hibernate With This Winter: Playlist

Kelly Anne Doran is a freelance writer and blogger based in Southern California. She's written essays and articles for Mental Floss, Career Contessa, and Just About Write. Follow her on Twitter @kellyadoran and visit her website at kellyannedoran.com.

Tags: Ariana Grande , thank u next , music video , 13 Going On 30 , Mean Girls , Bring It On , Legally Blonde
Support Feminist Media!
During these troubling political times, independent feminist media is more vital than ever. If our bold, uncensored reporting on women’s issues is important to you, please consider making a donation of $5, $25, $50, or whatever you can afford, to protect and sustain BUST.com.
Thanks so much—we can’t spell BUST without U.