The Carvels' "Scarcity" Video Is All About Breaking The Rules 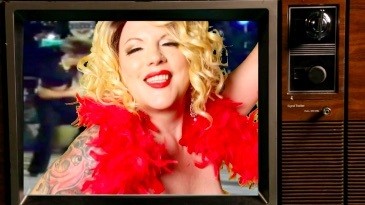 The archetypical ’60s American housewife gets a fresh feminist makeover in the Carvels’ new music video for “Scarcity,” off the New York band’s upcoming EP, Life is Not a Waiting Room.

Frontwoman Lynne Von Pang, who has previously performed in bands including Trick Babys and Da Willys—and is also a kickass illustrator whose cover designs graced our second-ever issue back in the ‘90s—calls her video more “#FuckYou” than #MeToo. “I’m talking about the scarcity mentality: the beauty myth, diet culture, and all the other antiquated ideals that oppress women,” she writes in a press release. “This song is about the joy of finally being free from these restrictions—ditching toxic relationships and having fun breaking the rules.”

The Carvels are known for mixing old-school girl group vibes with serious messages about womanhood and anger, and self-describe their sound as “if the Ramones and the Ronettes had children and Lou Reed were the nanny.”

“Scarcity” was directed by M.N. Kinski of Cherry Pie Pictures. You can listen to the Carvels’ 2017 EP, Everything With You is a Travesty, on Bandcamp and Spotify, and if you’re in New York, check them out live on Friday at Coney Island Baby in the East Village.