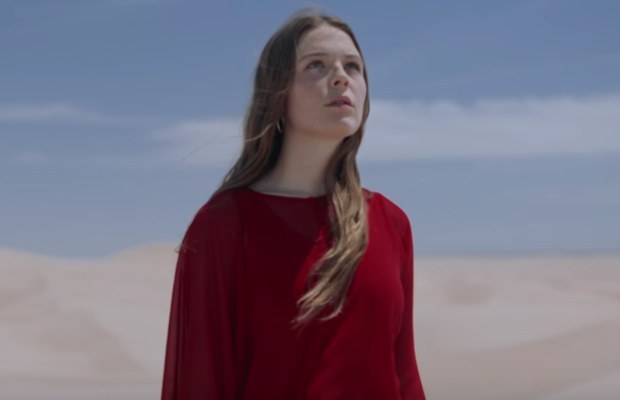 On a small studio stage, backed by a robust band of eight, 23-year-old musical sensation Maggie Rogers belts out two new songs from her upcoming album, Heard It In A Past Life. Barefoot and dressed in a crimson caftan, she glides around the space with a freedom as vibrant and full of life as her sound. Her vocals are luminous—goosebump-inducing, even. And while the magic of her performance feels reminiscent of other legendary artists, it feels singular too. Like a kind of magic only she can conjure.

But this performance wasn’t one of the many dates on her current tour. It was the realization of a dream: performing on Saturday Night Live. And unlike other musicians who have performed on the show before her—lip-synching, or fumbling through their lip-synching—Rogers was the real deal.

But, who is Maggie Rogers, exactly?

When her name comes up in conversation, there’s one video clip referenced most often, and for good reason. While attending the Clive Davis Institute of Recorded Music at NYU, Rogers took part in a Masterclass led by musical prodigy Pharrell Williams, and had the opportunity to share a song of hers with him. As “Alaska” pulsed through the speakers, Williams was blown away. So moved, in fact, he shed tears. “I’ve never heard anyone like you before,” he said. Their exchange was heartwarming and surreal, and the video clip capturing it all would go on to receive millions of views worldwide.

But it wasn’t simply her talent, or the infectious nature of her song, or even the joy of witnessing Williams praise her music that captivated viewers—it was her. In that clip, Rogers is earnest and articulate in equal measure, able to wax poetic on sound, human connection, and her desire to bend the boundaries of musical genre. Soon after that video went viral in 2016, she formed a partnership with Williams and signed with Capitol Records. But don’t let it fool you: she’s no overnight success.

Hailing from rural Maryland, Rogers dedicated herself to music from an early age, learning not one, but multiple instruments, and even attending a summer program at Berklee College of Music. Though it isn’t just this dedication to her craft (or the fact that she grew up without Wi-Fi) that sets her apart from the pack—it’s her authenticity as an artist.

Traditionally a banjo player, she fell in love with electronic music while studying abroad in France and returned inspired to fuse her folk background with the pulse of pop. Featuring found samples captured on some of her own hikes—bird calls, the crash of a tree, and even some rattlesnakes—her songs embody the sense of discovery we so often encounter in her lyrics. And they symbolize the very personal nature of her approach too. “My stance on writing music has always been to purposefully make myself as vulnerable as possible, because it almost feels like if I put it all out there, nothing can hurt me,” she told Office. And put it all out there is precisely what she continues to do, both online and off.

As she counted down the days to her performance on SNL, Rogers chronicled her preparation in candid, barefaced snaps shared on Instagram. Embracing both her nerves and excitement, she offered her fans the chance to join in on her journey—and the chance to cheer her on from the sidelines, as they would a friend. It’s this quest for personal connection which feels central to both Rogers’s music and her message. And it was refreshing to witness just how honored she was to perform, and to watch her excitement build as the big day grew near.

Closing SNL with “Fallingwater,” an affecting, triumphant song, Rogers showcases her innate musical talent and solidifies just how singular she is. As the audience erupts in applause at the song’s end, she seems almost stunned by the bliss of the moment, humbled by it all. She lets out a small giggle, nodding her head bashfully in thanks, and smiles.

This sincerity—like her sound—is a breath of fresh air. In the face of pre-fabricated pop music, Maggie Rogers offers her listeners something they can’t find anywhere else: herself.

Nicholl Paratore is currently pursuing an MFA in creative nonfiction at the University of North Carolina Wilmington. She spent nearly a decade living in New York, where she studied media theory at New York University and worked in the fashion industry. Her writing explores image and identity and is largely influenced by her interest in visual media. She is now at work on a memoir. Follow her on Instagram: @nichollp.