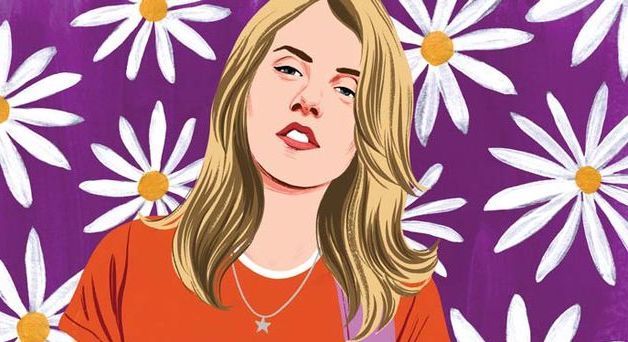 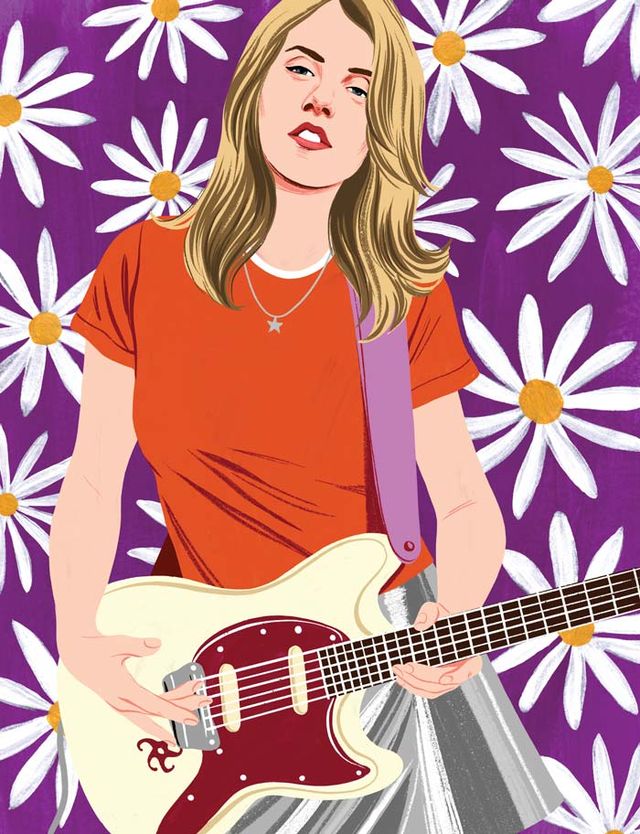 In June of 1993, bedroom-tape prodigy turned indie-music darling Liz Phair unleashed her answer album to cock-rock culture, Exile in Guyville, upon an unsuspecting college radio scene. A song-for-song response to the Rolling Stones’ Exile on Main St., Phair’s candid, sex-positive tales dressed in indie pop enabled her to hijack the traditional, male rock ‘n’ roll narrative. And her observations of how gender roles play out in personal interactions earned her accolades, backlash, and a spot on many critics’ “Best-Of” lists.

That same month, my own band, Bratmobile, out of Olympia, WA, also released our debut album, Pottymouth, replete with its own brand of personal-is-political tirades, as part of the riot grrrl movement. Though we differed both musically and strategically, the Chicago-based Phair and I shared an affinity for each other and for pushing back against the bro scene as our paths crossed here and there throughout the early and mid ’90s.

I first discovered Phair’s music in the summer of 1991 via my pen pal Tae Won Yu of the band Kicking Giant, who gave me Phair’s Girly Sound cassettes—collections of her confessional, home-recorded songs. Like Tae, I became completely obsessed with Phair’s disaffected delivery of bittersweet tales set to strummy guitar, and I played them for whoever would listen. In the following years, as an occasional interloper in Chicago’s Wicker Park music scene, I got to know Phair a bit, and she helped boost my morale when I was experiencing a little too much Guyville myself.

Early on, in the spirit of DIY idea sharing and inter-scene referencing, I swiped Phair’s song title “Fuck and Run” for a line in Bratmobile’s first single, “Kiss and Ride.” At a Bratmobile show in London a month after our albums came out, I admitted into the mic that although our song came out first, Phair came up with the line “fuck and run.” Unbeknownst to me, Phair was in the audience and came up to fake-confront me after our set. I was mortified but elated to see her. For some reason, I’d decided I needed to sleep my way across the U.K., so I asked to go back to Phair’s hotel room with her. She wasn’t having it.

Twenty-five years later, both of our debut albums have been re-issued: Phair’s box set Girly Sound to Guyville on Matador and an anniversary edition of Bratmobile’s Pottymouth on Kill Rock Stars. Preceding these releases, I had the pleasure of reconnecting with Phair by phone in sunny, southern California, and I continue to be impressed by her wit, tenacity, and poetic assertions of self.

You have always resisted being put in a box, whether in reaction to the mainstream or alternative scenes. What causes you to seek something outside of people’s expectations?

I’m such a rebel, it doesn’t matter what environment you put me in. Even though I’m adopted, I have both my father’s scientist brain and my mother’s art-history brain. I’m a tomboy and a girly girl. I’m Velma and Daphne. I’m a dumb blonde and very smart. I’m stuck in this world because I’m split down the middle. It’s caused me a great deal of trouble in my life, but I can’t do anything about it.

How did being adopted affect your sense of self?

There’s an identity turbulence going on inside of me. I think there’s a psychology of adopted kids that causes you to search out identity in a different way. If you know that you come from somewhere mysterious, then everything is up for grabs.

When and how did you start rebelling against dominant culture? Did you have any epiphanies that later informed your music?

I pulled out of mainstream thinking in high school, and Oberlin [College] took me further to a place where I was learning and not just rebelling. I wanted to be a visual artist. Music was just this fun little thing I did on the side in my room for nobody. I was studying art history and was bored in the library one day. Rather than study, I started counting how many female artists were included in this tome we had to lug around for class. I counted page after page and found hardly any women in the book. This wasn’t because women didn’t make art, it was because they weren’t encouraged, considered, validated, or paid. I saw our invisibility, and it was this moment of white-hot anger and outrage. I wanted us to be seen and for our lives to count. This is the great, grand force behind almost everything I do.

How did you get involved in the alternative music scene?

Before I made my own tapes, I was leaving the suburbs to go into Chicago at night to see bands. There was an alternate universe there, with a cultural identity you could assume or participate in. Then I started writing the Girly Sound songs in college. They were written over a four-year period and recorded at different times. I would house sit at my parents’ friends, water their plants, and set up my tiny recording situation in their living room. It was before the internet, so I would just sit there strumming, writing, and making stuff up for hours. However many verses I felt like I wanted to sing, that’s how many I did. Those songs weren’t particularly intended to be listened to by anyone. Everyone calls Exile in Guyville my diary confessional, but that’s not actually true. That was a conscious, conceptual record. Girly Sound was my diary, my unselfconscious, never-really-thought-it-would-be-heard, weirdo stuff.

Which is what’s so beautiful about those songs. Your lyrics describe duded-out scenes, sexism that happens in intimate relationships, and how the political plays out in a personal way. What were you reacting to?

I was definitely reacting to the male band culture that I was involved in as a peripheral person. Men were always teaching me about what good music was. I’m not sure why they wanted to or felt that they should. They tried to My Fair Lady me. I suppose I learned something, but I wasn’t a very good pupil. I didn’t care. When I look back, it’s an interesting insult, isn’t it? The idea that men are the ones who know and women should listen and learn.

A lot of guys do that. They often go out with younger girls so they can get someone fresh to teach and mold into what they want. How did these frustrations manifest in Exile in Guyville?

I wanted to tell Wicker Park, “Hey, stop telling me about music and acting like you’re some second species of amazing.” Male rock singers have forever talked about sex graphically and gotten it on the radio. As a woman, I wanted to take that back. Right or wrong, I felt that I needed to do it in a bold way—to put out bold, brash, sexual songs and be true to my inside self. I was full of bravado at that point anyway.

One aspect of third-wave feminism was sex-positivity, which your lyrics embodied. Did you ever feel like the media obsessed over the sex and threw out the feminism?

Oh my God, I was the “blow job queen.” The media constantly focused on sex, which is part of my life, but it’s one small section. I knew what I was doing, but I didn’t realize the mainstream would take it literally and not see the art or the cultural conversation. I feel women’s lives and experiences, including sexuality, should be visible. I put it right out there, but made myself the subject, not the object. And yet, the main takeaway oversimplified me.

Riot grrrls were also experiencing similar blowback. Our self-agency was questioned when we talked openly about sex work and used sexualized imagery to challenge double standards. People often asked, “How can you be a feminist and be a stripper?”

How could you read a book and be a stripper? How can she speak about feminism and encourage the male gaze with a low-cut top? That boils my blood. I want to start ripping things apart. Our bodies sell everything. They use us constantly to get male eyes on products. It’s background noise. At some level, the root of our problems is capitalism.

Journalists and promoters also slapped the label “riot grrrl” onto any woman in a punk/indie band, which served to further pit women against each other. Did you ever get thrown into that box?

Sometimes. I wish they’d done it more. I would’ve felt like part of the army. Riot grrrl became something that’s still used to describe a woman with a powerful voice. It was a broad basket. I imagine for you it was distressing, but I loved seeing riot grrrl being talked about. You guys made me feel stronger about being me. Because you existed, I knew that there was this thing that I was part of that had my back.

Aw, it means a lot to me to hear that. Do you feel like much has changed for women in music over the last 25 years?

It has and it hasn’t. The music business is not very conducive to being a woman. At some point, I remember feeling like you just can’t win. I felt tired—tired of doing battle and tired of getting shit for it. It’s just music. It really lets you know that you’re onto something when you get that much push back just for making music. Guess what? You don’t have to listen to it. I honestly don’t think that the world I want to see is coming for hundreds of years. Do you believe in reincarnation?

The conversation above is from an interview conducted for the book Women Who Rock: Bessie to Beyoncé, Girl Groups to Riot Grrrl, edited by Evelyn McDonnell and published by Black Dog & Leventhal.

Alice Bag, Kathleen Hanna And Allison Wolfe Are A Riot Grrrl "9 To 5" In The Music Video "77"

Tags: Liz Phair , Allison Wolfe , Bratmobile , interview , music , riot grrrl , BUST interview , from the magazine
Support Feminist Media!
During these troubling political times, independent feminist media is more vital than ever. If our bold, uncensored reporting on women’s issues is important to you, please consider making a donation of $5, $25, $50, or whatever you can afford, to protect and sustain BUST.com.
Thanks so much—we can’t spell BUST without U.