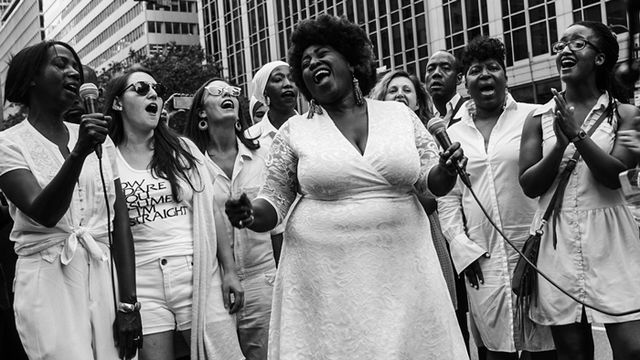 Though the Resistance Revival Chorus—a New York-based collective of more than 60 women who sing protest songs in support of women’s rights—first made national headlines when they backed up Kesha’s emotional 2018 Grammy performance of “Praying,” they’ve actually been raising their voices for social justice since the summer of 2017. When explaining her impetus for the project, the group’s co-founder Nelini Stamp says, “In the Civil Rights movement of the 1960s, it was Black church songs like ‘This Little Light of Mine’ and ‘Eyes on the Prize’ that Black folks would sing while getting carted away by police. In the South African freedom struggle, the toyi-toyi, which started off as a dance, got combined with songs for freedom. This inspired me to take part in creating this chorus along with my fellow sisters.”

Paola Mendoza, another co-founder, notes that the Chorus also looks to the past when it comes to their all-white apparel for their monthly performances. “I am Colombian, so I was aware that Colombian marchers wore white as they demanded an end to the 52-year civil war. And the suffragists wore white when demanding their right to vote,” she says. “I also read about a silent protest in New York in 1917, in which thousands of African Americans marched in silence down Fifth Avenue wearing white to protest the violence directed toward them.”

But while the RRC’s mission to bring uplifting music to the #resistance is rooted in the past, the group’s sights are firmly fixed on the future. “Our fight did not begin when Trump was elected president, nor will it end when he is out of office,” says Mendoza. “This fight has been going on for centuries and it will continue long after our generation has passed on.” For more information, or to start a branch of the RRC in your city, visit their online toolkit at medium.com/ @resistancerevivalchorus.

What Is The Resistance Revival Chorus? Meet The Women Who Backed Kesha At The Grammys

13 Resources For The Resistance Against Trump