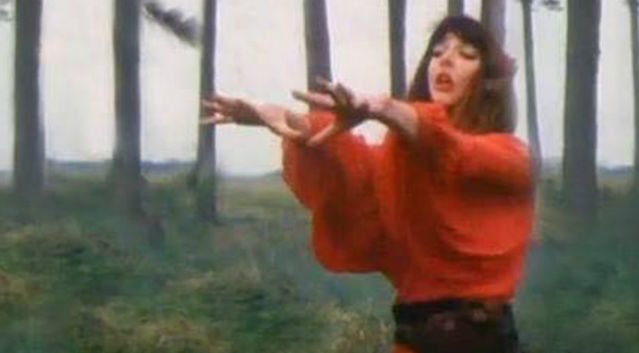 A phenom for her time, Kate Bush debuted her first album The Kick Inside in 1978, when she was just 19 years old. This year marks the 40th anniversary of its release and our introduction to one of the most wildly unique performers of our time.

Bush was not only one of the first British singer-songwriters to blend performance art and choreographed dance together (now categorized as “art rock”), but she was also the first female artist to reach #1 on the UK charts for her single “Wuthering Heights.” The track remains perhaps one of the most haunting musical tributes to a piece of literature ever.

Listening to Kate Bush’s “Wuthering Heights” for the first time is a spiritual experience—appropriate for a song that is also about a spiritual experience. The verb “wuther” fits the bill for this dual mystical experience. As in, “I laid on the ground in someone’s off-campus college housing, I burned Nag Champa, and Kate Bush completely wuthered me.” Okay, so that is an example from my real life. Yes, the first time I heard “Wuthering Heights,” it was in that very environment and on repeat for hours. Even in the heyday of cassette tapes, it was worth every manual rewind to have Bush's otherworldly voice sing me into oblivion.

The song is richly layered with piano, electric guitar, and an amazing bass line. Bush sings in the voice of Catherine, Emily Brontë’s deceased character, who has returned to haunt her first love, Heathcliff.

The famous lines of the chorus, which soar in Kate’s ethereal tone, are: Heathcliff, it’s me, I’m Cathy / I’ve come home now / so cold / Let me in through your window...

The chorus is liable to get stuck in your head for days, if not months. Brilliantly, Kate places the listener of the song in the position of Heathcliff, the character who broods over the loss of his first love Catherine throughout the entirety of the Brontë novel. As a result, listeners are indirectly led to contemplate our own experiences with lost love, and Kate (as “Cathy”) embodies the hope of its return. No wonder we still love her so much.

If you’re a visual learner, and prefer YouTube over iTunes, a few videos were released in the late 70s to promote her debut single. A 2006 biography of Kate Bush by Rob Jovanovic, however, states that these videos “pushed her further into the sex-object category...and detracted from her initial efforts to be considered a serious artist.” One could argue the same fear of not being taken seriously also applied to Emily Brontë when she decided to publish her novel under a male pseudonym.

In one of Kate’s many “Wuthering Heights” videos, called the “red dress” version, she dances as if possessed through the woods in (you guessed it) a red dress. While the video now may seem somewhat jarring and comical, Bush manages to channel elements of European fairy tales like Hans Christian Andersen’s “The Red Shoes” and The Brothers Grimm’s “Little Red Cap [Riding Hood].”

Another commonly viewed version is the “white dress” version, where multiple Kates dance together using the video technology of the late '70s.

Additionally, one live video recorded in Germany exists from the same year the album was released. Amazingly, Bush's vocal performance is nearly identical to her studio recording, a feat for a singer with such a high range.

If Emily Brontë, who published her supernatural gothic novel in the mid-19th century, had lived to hear the Kate Bush song, I imagine she might become just as transfixed as the rest of us have been for decades.

Big Boi Is Obsessed With Kate Bush Because DUH Who Isn't?!

Kate Bush Is Back With The Director's Cut