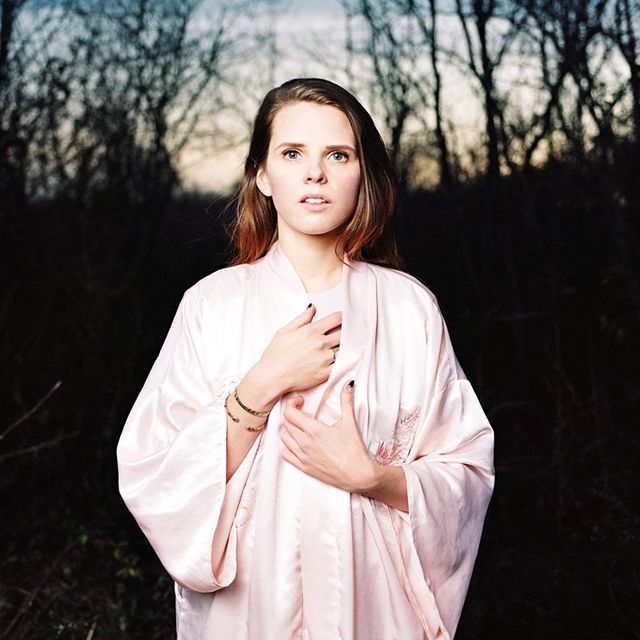 Meet Cassandra Jenkins. Known for her slick bass licks, Cassandra has shaped her own brand of cosmic alt-folk music, working with musicians including Eleanor Friedberger and Lola Kirke. Now, Cassandra is stepping out front and center and going solo. For her new music video “Honda’s Well,” featuring cameos from Adrianne Lenker (of Big Thief), Zannie Owens (of Potted Plant), and Lea Thomas, Cassandra draws influences from spirits, ancestors, mythology, and the occult world. We sat down with Cassandra to discuss her magical inspirations.

The song was inspired by Murakami's The Wind Up Bird Chronicle [which features a character named Honda]. While the novel's story rattled me into writing, the process of writing the song became its own meditation on wells, water, and exploring the depths of our subconscious through introspection. I often reference the Hermit card [in Tarot] when I’m writing, and its portrayal of a solitary figure on a journey, raising their lamp to find their inner light. This song, written to myself, acts as a personal reminder to breathe through moments of crisis and/or depression, in an effort to learn about myself and trust that on the other side of inner conflict is wisdom and compassion.

What is the premise of the music video for “Honda’s Well”?

The video for "Honda's Well" takes a lot of cues from the the song's lyrics, which focus on water, the psyche, and a journey beneath the surface that ultimately leads to a transformation. Andrew Gladstone, my friend and the film's director, had the idea to incorporate a few other players, and so there are three cameo appearances who dance and fade into view, playing the part of the three graces (or the Tarot card the Three of Cups) and acting as as mirrors of the psyche. When I think of these particular people—Adrianne Lenker (Big Thief), Zannie Owens (Potted Plant), and Lea Thomas —all are dear friends, artists and personal heroes of mine, and I feel empowered by their spirits and creative voices. Featuring them in the video (wearing dresses lent to us by my favorite designer, Gary Graham) allowed them to embody this on camera.

What mythological figure resonates with you the most, and why?

Recently, I’ve put a lot more thought into my relationship with Cassandra (of Troy) these days. As the Greek myth goes, she was a clairvoyant blessed with the gift of predicting the future (notably the Trojan Horse), but cursed by Apollo so that no one would believe her. This led her to be viewed as hysterical, and in some ways, I can relate. When I decided to self-release my music, I named my record label Cassandra Complex, because there are times when I feel my voice as an artist and a thinker isn’t heard simply because I’m a woman, and that feels maddening. Hearing my heroes, like Bjork, echo grievances about the music industry like “everything that a guy says once, you have to say five times,” makes me feel a little bit less like I’m imagining things. At heart, I’m not a defeatist. I don’t see this position as a curse (like the myth), but a problem ripe with challenges, to which there are solutions. This leads me to the never-ending question of how to make social commentary in a way that is accessible, beautiful, and relevant. We need to keep developing our artistic language, and to respond to and anticipate cultural change as it's unfolding. A lot is changing right now with regards to our attitudes toward gender and sexuality, and it’s vital as an artist to contribute to that conversation.

Which element do you relate to and why?

This changes throughout my life. While I’ve most often related to fire (being an Aries, I'm naturally drawn to fire and its association with rebirth), I’ve meditated on and incorporated the element of water into my life a lot more these days. This is echoed a lot in this particular song and music video. Water is a natural metaphor for the psyche (and I’ve often gone back to Carl Jung’s observations on the subconscious as it relates to water). Lately, I’ve been focusing on the Three of Cups, the Mercury in Cancer card. To me, water represents communication and the flow of emotion, and I'm always striving to allow music assist me in processing my experiences and my emotions. It's not always easy to put our feelings into words, and music offers so many tools to support that endeavor. Learning how to use those tools is a lifelong pursuit.

When did you first become interested in the occult world?

I was born the night of a Friday the 13th during a full moon. When my mother recently uncovered an old box full of my earliest compositions, it didn’t come as a surprise that my first song (which, judging by the handwriting was written at age 4) was titled, “Thatho the Ghost,” and my first play (written a few years later, titled “The Witch of Doom Castle”) told the tale of a woman who, isolated from years being misunderstood by society, grew deeply connected with her natural surroundings by taking care of the forest flora and fauna.

What is your relationship with the occult world today? How does that transcend into your music?

Reading Tarot is one way in which I regularly relate to the occult world. It's partly intuitive and partly based on ancient symbolism. I'm fascinated by interpersonal relationships, and the relationship between the questions being asked, the symbols in the cards pulled in response to that question, and the way certain images relate to each other. Incorporating a Tarot practice into my life has encouraged me to experience a heightened awareness of my surroundings and the patterns that emerge throughout a lifetime. I find that so much of the art of reading Tarot is guided by how closely you can pay attention to subtle details that might help illuminate a greater picture, and this is a perspective that has undoubtedly influenced my approach to lyric writing as well.

I started hosting singing circles shortly after the shock of the 2016 presidential election, as a way to collectively encourage healthful mind/body expression. Singing, especially in groups, allows for a truly embodied experience and is not only healing for the singer but for all who are able to feel the resonance of the song's frequencies. Some of the songs in our songbook are ancient incantations, mixed in with original compositions and modern rounds. The work of Pauline Oliveros and her philosophies about the importance of deep listening are a huge influence on me and feel especially relevant amidst today’s tumultuous political climate. I strive to give others a space to experience peace and empowerment through vocal expression. As the group’s motto implies, “singing helps.”

What do you try to manifest in your life?

I try to incorporate a sense of magic into my daily life as much as possible and I think it is safe to say that a certain awareness and appreciate for natural cycles is by far one of the most important things about any spiritual practice of this kind. I think the more we are able to pay attention to and learn from the natural world, the more we can apply it to our inner world, and continue to bridge the illusion of a gap between the two. I also practice solitary mindfulness meditation and attend moon ceremonies, which are a wonderful way to identify intentions and affirmations. I believe that focusing one’s thoughts enough to voice them to others supports the process of manifesting those ideas into the physical realm.

Do you draw inspiration from your ancestors in your music?

Yes absolutely, and quite literally. My ancestors are farmers, teachers, and community organizers who lived on farms in upstate New York (starting as indentured servants). Growing up between New York City and the Hudson Valley, I often reflect on the fact that I’m the first generation in my family to grow up without a deep connection to that land, and often yearn to restore that relationship.

I can recount several times my sister (four years younger) and I have shared dreams relating to our ancestry, and my most vivid ancestor dream was from my grandfather (we called him Honey) shortly after he passed away. I dreamt my grandparents' rotary phone was ringing in their kitchen. When my grandmother answered, she handed me the phone and said, “Honey wants to talk to you.” I held it to my ear, and instead of a voice, I heard the melody of “Stardust” playing mellifluously through the receiver.

I later found out that “Stardust” was the song my grandparents considered to be “their song,” and it’s continued to hold significance for me. Several years later, it popped up in the dream world again, when a partner of mine unknowingly woke up with the same melody in his head. Something told me in that moment that my grandfather was giving me his blessing.

Uranus Is Now Retrograde—Here's What To Expect