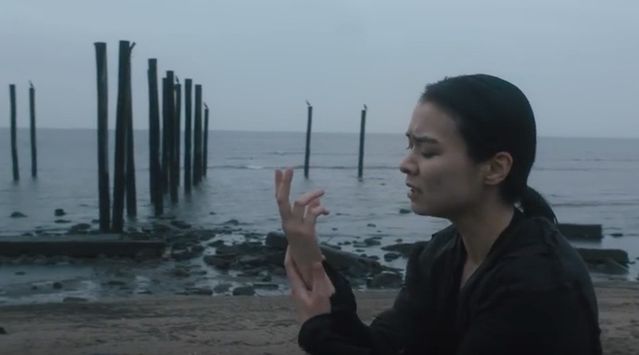 In the music video for “Geyser,” the lead single off Mitski’s incredible new album Be The Cowboy, the singer dances on an abandoned beach. She reaches her hands out over the gray waters, sprints along the beach, throws herself on the ground, crawls determinedly forward, and finally, digs a hole with her bare hands and literally buries her head in the sand. Though there’s no sand onstage, expect the same focus on movement at Mitski’s live show.

Every detail at Mitski’s record release show at Brooklyn’s Elsewhere on Saturday, August 18 seemed carefully chosen, from opener Sidney Gish (who performed wearing a cowboy hat) to Mitski's loose, black top. Onstage, Mitski rhythmically flipped her ponytail; gracefully reached out to the audience; and strode back and forth across the stage in movements carefully choreographed to pair with her songs, both the new tracks from Be The Cowboy and old favorites like “Best American Girl” and “First Love/Late Spring.” Mitski kept audience banter to a minimum, mentioning that she’d read a review that described Be The Cowboy as “St. Vincent for people with real problems” (a comparison she seemed to get a kick out of), and remarking on the familiar faces from her college days (she attended SUNY Purchase). She picked up her bass for a few songs at the end of the show—”My Body’s Made Of Crushed Little Stars” among them—but for the majority of the show, she danced.

On Instagram, Mitski wrote about the way her movements onstage connect with the album: “I want my shows to be a place you can find or let go or forget or re-organize the stuff inside you, if only for an hour. for this year's tours I've handed over bass duties to @maganarama and gotten help from dear dancer friend @fluct_monica, to try to better create this space. I think of the show as an integral part of the album, so I hope y'all can come and experience it with me.”

On her own Instagram page, choreographer Monica Mirabile shared a few examples, and described Mitski’s movements as “Subtle emotional dance movement live concept poetry in ritual release of repression.” Which sounds pretty accurate to me. If you love Be The Cowboy the album, make sure you see Be The Cowboy the show—Mitski just added new dates in Brooklyn, DC, and Philadelphia. Visit mitski.com for tickets and more information.

Tags: Mitski , Be The Cowboy , concert , concert review , music
Support Feminist Media!
During these troubling political times, independent feminist media is more vital than ever. If our bold, uncensored reporting on women’s issues is important to you, please consider making a donation of $5, $25, $50, or whatever you can afford, to protect and sustain BUST.com.
Thanks so much—we can’t spell BUST without U.