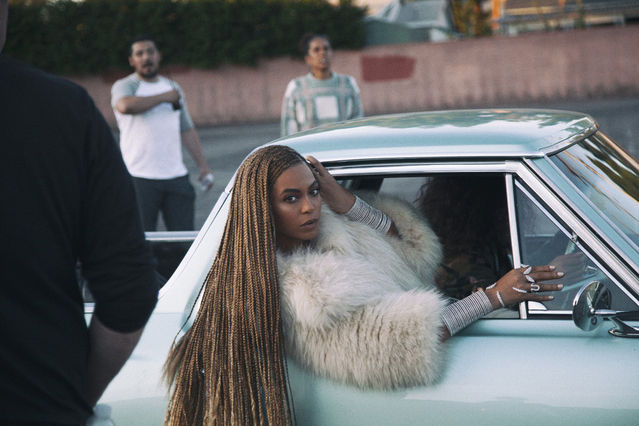 Several sources have confirmed that Beyoncé will grace the cover of Vogue’s upcoming September issue—and the Lemonade superstar will be bringing with her the magazine’s first-ever black photographer to shoot a cover story, reports The Huffington Post. Anna Wintour, Vogue’s editor-in-chief, has also never before given a cover star this kind of control over the magazine.

“The publication is contractually obligated to give Beyoncé full control over the cover,” Yashar Ali writes in the Huffington Post. Bey will choose her cover art and many of the photographs inside. Instead of a traditional interview, the artist will write her own long-form captions.

“The reason a 23-year-old black photographer is photographing Beyoncé for the cover of Vogue is because Beyoncé used her power and influence to get him that assignment,” a source close to Vogue told HuffPost. The photographer, Tyler Mitchell, just graduated from NYU in 2017, but he’s not at all new to the industry. Mitchell has previously shot a cover story for The FADER and worked with Givenchy, Converse, and Marc Jacobs, The Cut reports. He also shot parts of Teen Vogue’s viral March For Our Lives cover story this past spring, and has amassed almost 85,000 followers on Instagram.

2017 has been really special. Honored to be featured in the @nytimes Up Next column. Talking about going from school into making photography and filmmaking my lifes work. Online now. In the paper on Thursday too. Go get it

Mitchell was also featured in The New York Times' “Up Next” interview series. “I depict black people and people of color in a really real and pure way,” he said. “There is an honest gaze to my photos.”

This news does raise the question of why it’s taken so long for Vogue, a magazine that’s been in print for 126 years, to hire a black photographer for their cover. But the upshot is, Beyoncé is making history again—and we can’t wait for September.

Beyoncé Will Play Nala In "The Lion King," Is Now Our Lion Queen

Tags: Beyoncé , Vogue , Anna Wintour , Tyler Mitchell
Support Feminist Media!
During these troubling political times, independent feminist media is more vital than ever. If our bold, uncensored reporting on women’s issues is important to you, please consider making a donation of $5, $25, $50, or whatever you can afford, to protect and sustain BUST.com.
Thanks so much—we can’t spell BUST without U.